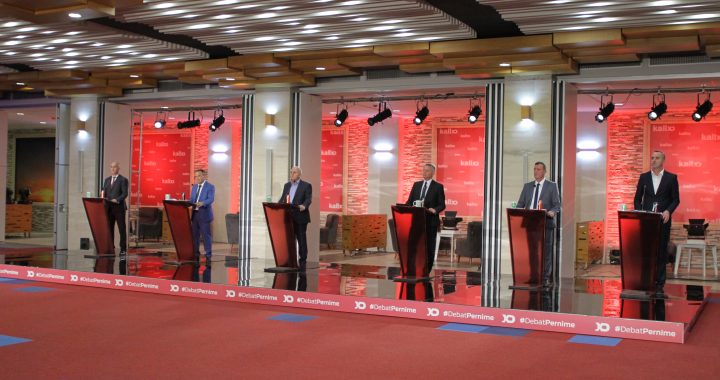 Candidates for mayor of Obiliq, participating in DebatPernime with Jeta Xharra. Photo: BIRN

Candidates for the mayoral elections on October 17 have been grilled on how they would tackle the struggle against violent extremism if they win office.

Back in the 2017 local elections, a candidate for a mayoral post in Kosovo responded only briefly, when asked about his plans to prevent violent extremism.

“This is a matter for the police,” the candidate told a TV debate, Jeta ne Komune – Life in the Municipality.

Back then, hundreds of Kosovo youngsters had gone to Syria and Iraq to fight alongside Islamist terrorist organisations like ISIS and Al-Nusra, many of them taking wives and children, leaving behind worried family members and a damaged image of their country.

According to Kosovo’s Ministry of Interior, some 74 of their children were returned to the country in 2019, 26 of them of preschool age.

From being a taboo issue, Islamist extremism – and how to counter it – has now become a normal discussion point for the same mayoral candidates who shied away from it in the past.

Mayors have become aware that the social services offered in each town and the education systems run by towns and cities can play a key role in preventing violent extremism in its early stages, by detecting it as early as possible.

Through a program called the Resilient Community Programme, RCP, formed of four NGOs, Kosovo civil society has been working with local authorities to prevent violent extremism and to encourage the resocialization of returnee fighters from Syria and Iraq and their families.

Municipalities in Kosovo are responsible for public safety and social working centres. They can also appoint a certain number of social workers and psychologists, depending on the needs of each city and public school.

As a part of RCP, BIRN has been asking mayoral candidates in the current local election campaign how they would increase capacities to deal with violent extremism in their municipalities, if they become mayor.

There are over 12 obligations that mayors have, according to the National Strategy Against Terrorism and Violent Extremism that runs in Kosovo from 2021 to 2025.

In the 25 BIRN-run DebatPernime (Real Debates) held so far, the answers of local would-be mayors varied.

Four years ago, local authorities largely claimed that it was “up to the police to deal with this”.

Now, candidates understand that violent extremism is a social matter and that they have to offer solutions, and boost the municipal services available, assisting communities in dealing with violent individuals.

Kosovo’s eastern municipality of Kaçanik is one of the regions most affected by violent extremism. Dozens of locals travelled to Syria and Iraq from there to fight.

Shkelqim Jakupi, mayoral candidate from the Democratic League of Kosovo, LDK, blames the municipality for not providing enough recreational spaces for young people.

“Young people from Kaçanik have no public sports halls, no football stadium, auxiliary sports fields and culture centres. The lack of them leads people astray, as there is nowhere for them to focus their energy,” said Jakupi, who promises to build such spaces to offer an alternative to religious extremism.

Besim Ilazi, current mayor of Kacanik, from the Democratic Party of Kosovo, PDK, disputes the claim, listing existing sports halls already available. He also says building a new sport space is the obligation of the Ministry of Culture, Youth and Sports.

“Through the work we have done with the Islamic Community, the police and through cooperation with citizens, since 2015 we have managed not have any [more] cases of young people going or trying to go to the heart of war,” Ilazi said.

An independent Kacanik candidate, Kastriot Bushi, has another plan. He wants the re-socialization and reintegration of young returnees to be supported by business start-ups.

Shukri Luta, another independent candidate, denies that Kaçanik has a problem with violent extremism or is the “centre of jihadism”, as was said at the peak of the fighting in Syria and Iraq.

“We should resocialize those people [repatriates]. Those who come [from war zones] are scared when they return, so we must provide them with an amnesty and safe return because they are our people, they are Albanians,” Raka said.

The same problem – a high number of people who went to Syria and Iraq – is emphasized in the municipality of Ferizaj. There, mayoral candidates are planning to improve the situation through lectures and local mechanisms.

Sibel Halimi, Ferizaj’s LDK candidate, has vowed that if she becomes mayor, she will empower young people through various activities and programmes.

“One of the mechanisms that I will create will be the Municipal Council for Community Safety, which will include all key citizens’ groups and institutions that will work to prevent radicalization,” Halimi said.

The current mayor, Agim Aliu, from the PDK, seeking a second term in office, said that to prevent the phenomenon they have already organised lectures and trainings in schools with imams and residents.

Another municipality whose citizens who went to fight in the war zones is Gjilan, which currently has a reference mechanism for extremism. This obliges local teachers and community workers to refer cases upwards if they detect a tendency amongst individuals towards violent extremism.

Current mayor Lutfi Haziri, from the LDK, stressed that Gjilan will continue to prevent the spread of extremism through this referral mechanism.

Meanwhile Lulzim Behxheti, an independent candidate for mayor, said he will eradicate extremism through an “international strategy”.

Behxheti plans to prevent extremism by recruiting qualified staff who will deal specifically with this problem and who will incorporate practices he has seen in Norway. He claims he will do this through an agency located in Helsinki, Finland.

Leonora Morina Bunjaku, Gjilan’s PDK candidate, said that she will address the issue of extremism through the municipal safety council and other relevant municipal bodies.

“We will engage with non-governmental organizations which can organize public lectures and awareness campaigns,” Hyseni explained.

In Prizren, in the absence of a concrete plan, mayoral candidates say they will eradicate terrorism through resocialization and will keep security within the competence of security institutions.

Shaqir Totaj, PDK candidate for mayor, said that he will focus on preventing this phenomenon before it becomes a security concern. “We will offer opportunities for business, sports and recreation,” he said.

Security institutions are also the option for Zafir Berisha, the candidate from the Social Democratic Initiative, “Nisma”.

Afrim Tejeci, the candidate from the New Kosovo Alliance, AKR, said the returnees will be re-integrated in society by approaching them personally.

Mytaher Haskuka, the current Vetevendosje mayor, said surveys were being done in local schools, and “action will be undertaken based on the findings and analysis from these surveys”.

He added: “Education, sport and culture activities are the best way to fight radicalization.”

A lack of psychologists in schools is widely seen as problematic, as the lack of such professionals leaves teenagers without access to proper socio-psychological treatment.

Gazmend Muhaxheri, current LDK mayor of Peja, who is seeking another mandate, said they will try to hire psychologists for each school.

“Peja has a number of cultural-artistic associations but not many young people from Peja are engaged in them. This is due to the lack of commitment of the municipality to budget for their activities,” Husaj complained.

“Engaging young people in cultural and youth activities is the only way to remove them from these [extremist] phenomena,” he added.

Gazmend Agusholli, the Vetevendosje candidate for Peja, said that the municipality should organize awareness campaigns to prevent radicalization.

Agusholli says that in order to fight indoctrination into religious extremism, the police should cooperate more closely with municipalities.

The candidate from the Alliance for the Future of Kosovo, AAK, Rrustem Berisha, did not reveal any concrete strategy other than saying that the phenomenon required special treatment and a serious approach.

In the debate organized for Lipjan municipality, the mayoral candidates also unveiled their plans for prevention, reintegration and re-socialization of returnees.

Adnan Rrustemi, Vetevendosje candidate, emphasized that he has read the statement of the obligations of the local authorities that BIRN sent to the candidates and agreed with them, and will take the measures proposed there.

But Rrustemi said he also plans to deal with the causes that lead to extremism, which include poverty.

“To eradicate poverty and poor living conditions, we should intervene through the social programs of the social welfare centres. For resocialization, we need to take other measures, such as support for these former fighters to enter the labour market,” Rrustemi said.

“We have seen these cases [of extremism] occur due to poverty. So we need to focus on this part of society. In this context, we must fight extreme poverty through cooperation with organizations,” he said.

Another level of prevention is planned by Hyzret Rizani, PDK Lipjan candidate, who said that if he becomes the mayor, he will create an online education platform to which parents, teachers and students will have access.

“We will build an emergency facility where all cases of extremism will be treated and we will open police stations in the villages of Gadime, Dobraja and Sllovi, to be closer to citizens,” said Rizani.

The current LDK mayor, Imri Ahmeti, considers extremism a Herculean task for municipalities. He stressed that the phenomenon had to be addressed at central level, and central authorities should support local ones in dealing with it.

The Resilient Community Programme is being implemented by BIRN, Peer Educators Network (PEN), Advocacy Training and Resource Center (ATRC), Prishtina Institute for Political Studies(PIPS) and supported by The Global Community Engagement and Resilience Fund (GCERF), with funding from USAID and Kingdom of the Netherlands.