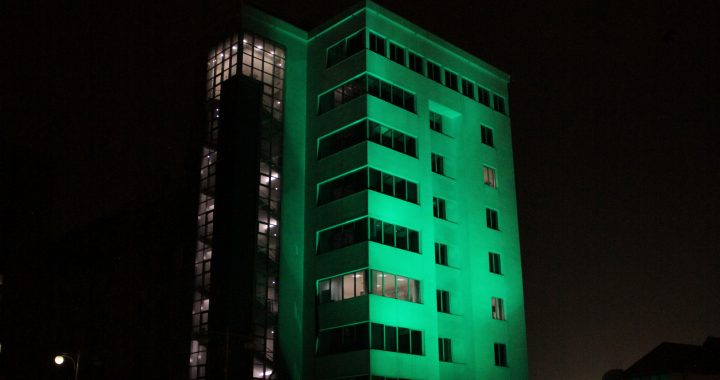 On Monday "Climate Diplomacy Week" started in Kosovo, an event that aims to stimulate debate on climate change – whose challenges have prompted the EU to organize similar weeks around the world.

Miran Vatovec, from the EU Office in Kosovo, told BIRN that the events and activities planned to be held this week aim to raise the public’s awareness of the need to take decisive steps towards climate neutrality as one of the ultimate goals of the EU.

“Climate change is an existential threat to humanity and we all need to contribute to the reduction of green-house gas emissions, whether from burning the coal or driving a car,” Vatovec said.

As part of the activities, the main European Union sites in Kosovo were illuminated in green: the House of Europe in Prishtina and the Office of the European Union.

The Head of the EU in Kosovo, Thomas Szunyog, through a video broadcast on the website of the House of Europe, encouraged Kosovo society, institutions and every person to demonstrate their highest possible ambition to halt climate change.

“Global warming is an existential threat to humanity. Global greenhouse gas emissions remain on an unstable trajectory despite short-term emission reductions due to the impact of the COVID-19 pandemic,” he said.

In the coming days, a panel discussion will be held on where Kosovo is in the European Green Deal and air monitoring reports for the municipalities of Peja and Gjakova will be presented. The School of Arts in Peja will also host an exhibition of things made from redesign through the recycling of unused clothes.

From 27 September to 17 October, EU delegations and embassies of EU member states around the world have started these weeks to promote dialogue and cooperation on climate change, to show success stories and to inspire further actions.

The focus of this year’s Climate Diplomacy Weeks is ambition and action.

Considering that climate change and environmental degradation are an existential threat to Europe and the world, the European Green Deal seeks to transform the EU into a modern, resource-efficient and competitive economy.

The world is endangered by a number of factors that affect global warming: high temperatures, drought and wildfires, availability of fresh water, floods, sea-level rises and more. Under the Green Deal, the EU aims to be climate-neutral – an economy with net-zero greenhouse gas emissions – by 2050.

One third of the €1.8 trillion investment from the NextGenerationEU Recovery Plan and the EU’s seven-year budget will fund the Green Deal. NextGenerationEU is a recovery plan designed to help Europe emerge stronger from the COVID-19 pandemic, with transformed economies and societies.