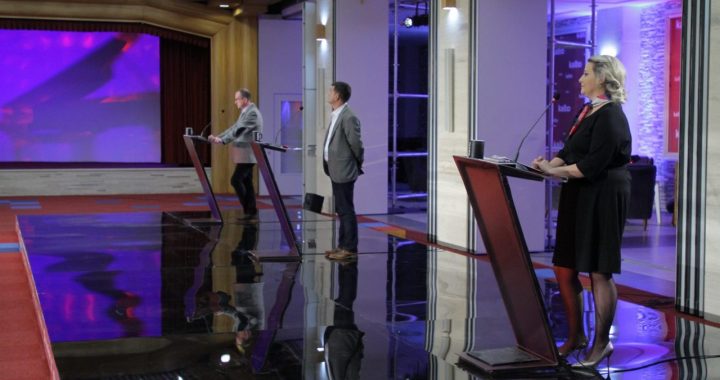 Three candidates for mayor of Gostivar in North Macedonia sparred over how to address the high infection rate and low vaccination take-up in the municipality in a televised debate organised by BIRN.

Candidates for mayor of Gostivar disagreed in a televised debate organised by BIRN on Monday over how to cut infection numbers, boost the vaccination rate and deal with the economic damage caused by the pandemic.

The current mayor, Arben Taravari of the Alliance for Albanians – Alternativa coalition, defended his record, arguing that current legislation in North Macedonia gives the local authorities little control over healthcare issues in a municipality that is one of the most affected by the pandemic in the country.

“We hope that with the new Law on Local Government, the mayor will have more competencies on primary medicine,” said Taravari, who is a doctor by profession and is seeking a second term as mayor.

“We have taken measures on disinfecting public premises, schools and enterprises and we have been constantly engaged in informing the public,” he added.

Gostivar has had 330 COVID-19 related fatalities, while its vaccination rate is among the lowest in the country, with only around 35 per cent of adults vaccinated so far.

Taravari’s rivals in the local elections, which will be held on October 17, said they were not convinced by his justifications for the municipality’s problems with COVID-19.

Fadil Zendeli, who is competing as a candidate for the Besa Movement, said that the local authority has enough power to implement recommendations from health institutions.

“You cannot say you have no competencies while you manage local public institutions, inspectorates and schools,” Zendeli said.

“If you go to bars and restaurants, you can see that no one asks clients whether they are vaccinated and at the tables you can see more people than allowed,” he added.

Renata Elezi from the Albanian Democratic Party blamed the mayor for turning a blind eye to public gatherings.

“What we can do as a municipality is we can raise the awareness among citizens through various campaigns about vaccination which involve professionals,” Elezi said.

A fourth mayoral candidate, Nevzat Bejta of the Democratic Union for Integration, declined to participate in the debate.

Gostivar is located around 70 kilometres west of the capital Skopje. According to the census held in 2002, it has more than 35,000 residents, 47 per cent of them ethnic Albanians, 33 per cent Macedonians and 12.7 per cent Turks. Data from the latest census held last month has not been published yet.

BIRN Kosovo and its partners in North Macedonia will organise and produce seven televised debates ahead of Sunday’sp olls, with a particular focus on the Albanian-majority municipalities of Diber, Likove, Zheline, Tearce, Saraj, Cair and Gostivar.

The debates will feature mayoral candidates from various political parties and women candidates for municipal councilors in a bid to spark wider discussion about the upcoming municipal elections.

The debates are being broadcast in primetime by the Albanian-language channel of North Macedonia’s public broadcaster, TVMK 2, as well as by the private-owned VOX TV.

This is the second series of debates held around North Macedonia’s local elections, after BIRN organised a first series ahead of the last polls in 2017.