Kosovo remains the poorest country in the region in terms of clean water per capita and spends millions on purifying the water that citizens drink through supply networks. Kosovo also discharges polluted waters beyond its borders.

Data shows that the country only has 1,600 cubic metres of water per resident, while there are concerns that water is polluted as soon as it touches the ground.

Consequently, most locally built water supply systems have to invest in purification and treatment equipment in order to make the water drinkable.

In the country’s 38 municipalities, there are only three small plants that treat wastewater but they only have the capacity to serve 50,000 inhabitants. The rest of the sewage from more than 1.7 million Kosovo inhabitants ends up in rivers.

In addition to the financial cost of water pollution, it is also proven to create serious damage to human health. Last year, hundreds of citizens were poisoned by contaminated water in the area of Deçan, while the country has produced no information on the problems and diseases caused by water pollution.

The scale of damage to flora and fauna is also unknown as there has been no analysis of the consequences of pollution for animals, birds and plants. Contemporary measurements of which rivers are most polluted are similarly unavailable.

In its reports, the Ministry of Environment, Spatial Planning and Infrastructure (MESPI) considers the Sitnica River to be the most polluted, but this data is disputed by the expert Baton Begolli. According to Begolli, the ministry’s data is based on a measurement taken in 1982 and is not realistic today.

“There are many factors, such as the closure of much of the industry that operated before the war, and on the other hand the opening of new industries, demographics, alienation of water properties, construction of gastronomic and tourism facilities near rivers and lakes, excessive water use, climate change and many others. Thus, we need to improve the surface water monitoring network in terms of quantity and quality but also the functioning of the groundwater monitoring network. Without this assessment — that River X is more polluted than River Y — it would be a subjective assessment or an assessment based on already outdated documents”, Begolli said.

Analysis of water flows shows that most of Kosovo’s rivers are seasonal rivers that depend mainly on atmospheric precipitation. As a result, during the summer, the volume of water in the rivers falls and their pollution levels are higher. 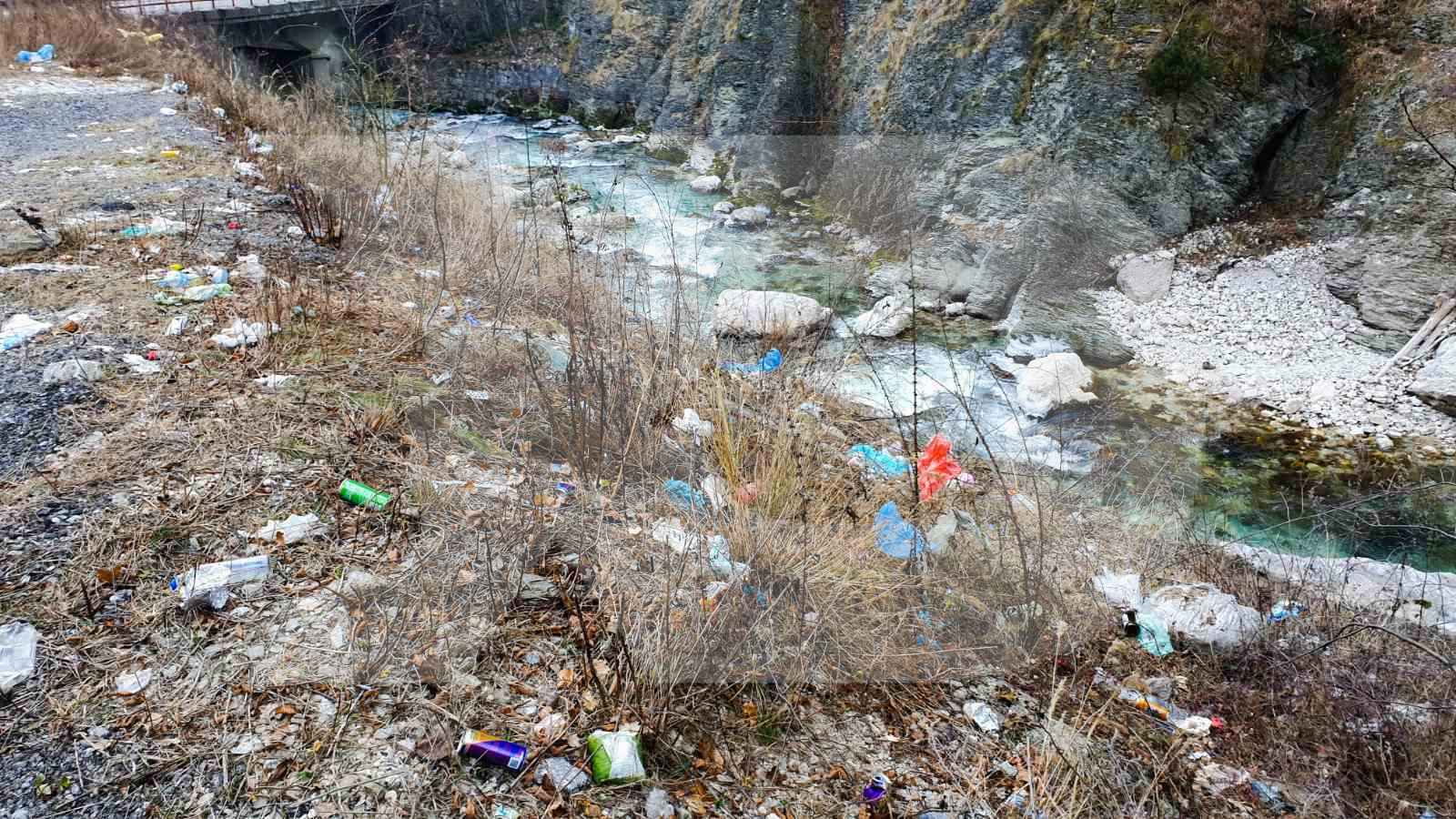 Pollution of rivers by sewers

The largest pollution of water in Kosovo comes from untreated wastewater, and most municipalities in Kosovo still do not have treatment plants.

This report also shows that the distribution of sewerage infrastructure increased by about four percentage points compared to the previous year. In 2019, the network reached 36.51 percent of the population.

According to the data, about 74.19% of households, public institutions and businesses stated that they were connected to the sewerage system, compared to 71.42% in 2019.

The performance report states that 86.54% of activities detailed in the plan for construction and maintenance of the sewerage system had been implemented, compared to 74.64% in 2019.

Small plant capacities have been built in the country but it is estimated that installing equipment nationwide could cost up to 1 billion euros. The data shows that the plant that is being built in Peja, with capacity for 60,000 inhabitants, has cost about 25 million euros. At this price, wastewater treatment for 1.8 million inhabitants would cost over 750 million euros.

In addition to pollutants from sewers, Kosovo’s water is also polluted by many other pollutants. Plastics, lubricant residues, gravel mining and industrial waste are also estimated to be major pollutants.

“Water resources in Kosovo are threatened not only by the discharge of untreated wastewater, whether from households or industry, but also by the dumping of solid waste, the exploitation of river beds and banks, construction in protected areas and alienation of water properties. So, there are many challenges that need to be addressed simultaneously, but the good thing is that we are already in the process of treating polluted water from Kosovo’s main cities”, Begolli told BIRN.

Kosovo currently operates with three wastewater treatment plants, in Prizren, Skenderaj and Junik. According to official information, plants in Peja and Gjakova are expected to start operating soon.

In addition, plants for Prishtina, Obiliq, Fushë Kosova, Gračanica and Mitrovica are under construction, and these would have the potential to include wastewater from Vushtrri and Gjilan.

River waters are also endangered by machine oils that enter Kosovo with suspicious contents, as well as by used machine oils.

Waste oils are considered hazardous waste as they contain hazardous properties. One litre of waste oil can contaminate a million litres of water, and waste oils in rivers, lakes and streams threaten aquatic life. Also, if oil residues remain in the soil, they can seriously contaminate the soil.

Everyone, including industries, consumers and car servicing workshops, have an essential role to play when handling used oils.

In the face of significant environmental problems, MESPI has no information on whether fines have been imposed on people who use motor oils that end up in sewerage networks or for heating during the winter season.

However, according to the ministry, about 200 fines were imposed in 2019 for dumping oils in inappropriate places.

“In recent years, MESPI’s Inspectorate has organised inspection actions nationwide, where all car waste collection centres have been inspected, and specific measures have been imposed for the irregularities encountered. For example, during 2019 alone, it issued close to 200 fines for dumping oils in inappropriate places”, the ministry stated in answer to a question from BIRN in February.

The Administrative Instruction on the Management of Used Oils and Waste Oils was approved in 2013.

According to the administrative instruction, the management of used oils and waste oils is done by applying conditions set by EU directives, while the instruction also determines mandatory provisions and other conditions for the collection, transport, treatment, reuse and storage of used oils.

The administrative instruction further states that, amongst other things, used motor oils cannot be discharged in containers in which ordinary municipal waste is disposed, discharged into groundwater, surface water or drainage systems, spilled anywhere on land or discharged into sewers, roads, parking lots or parks.

BIRN requested information from MESPI on the existence of any accredited laboratory in Kosovo to perform specific tests. They did not provide any information.

Such centres are required to report annually on the management of waste oils.

Although these centres are required to report, the ministry does not have information on the annual amount of waste oils that is decommissioned or what happens to the decommissioned oils.

According to Begolli, although the pollution of rivers is high, there is no cause for alarm. He adds that the risk of any environmental accident may appear in periods of drought.

“The law says that the transport of hazardous fuels and substances near accumulation lakes has been banned for years, but only now have we seen concrete action with this government that issued a decision for a ban near Lake Badovc, where this risk is more imminent. The risk can be higher especially in periods of drought, where the water capacity decreases and the concentration of pollution increases”, Begolli said.

Degradation of rivers by hydropower plants

In Kosovo, rivers have also been significantly degraded by hydropower plants.

According to data from the Energy Regulatory Office (ERO), the total value of investments in hydropower plants that are in operation is around 122 million euros.

The rest is produced by wind and solar panels.

Almost all hydropower plants in Kosovo are built in strict nature areas. Until recently, citizens in these areas were not informed that hydropower plants were being built, and the plants subsequently dried up the irrigation of their fields and reduced the amount of drinking water.

BIRN has continuously reported on residents’ objections to building new hydropower plants in the Sharr and Rugova Mountains. Media pressure and civic activism have led to the termination of plans for hydropower plants on the Lumbardh River in Peja.

BIRN has also reported on over 200 protests by residents of villages in the municipalities of Štrpce and Kaçanik who are continuing to oppose the construction of these projects on the Lepenc River.

These are some of the findings of a report drafted by a working group established by MESPI. Despite the findings, the ministry has not yet stated whether any of these cases have been referred to the State Prosecutor.

However, these findings are already under the scrutiny of the Auditor. In January, the Auditor initiated an audit in the field of energy and environment with the theme “Licensing system of hydropower plants and their impact on the environment and water (2015 – 2021)”.

Regarding the use of water resources, Begolli told BIRN that the different levels of government must respect the Law on Waters of Kosovo. According to Begolli, the bodies responsible for overseeing water resources should be strengthened, including the Authority of the River Basins District, the Environmental Inspectorate and the Hydrometeorological Institute of Kosovo.

“This is important, not only in conserving existing resources but also in developing new artificial lakes to meet Kosovo’s water needs. It is important to strengthen the Kosovo Hydrometeorological Institute, because if they’re not monitoring the quantity and quality of water resources, their management does not make sense, or is deficient. The Inspectorate should be strengthened and above all the sector should be strengthened and opened as much as possible to young professionals”, Begolli told BIRN.

Hydropower plants also have a significant impact on agriculture and tourism development in the areas where they are built.

On several occasions, BIRN has reported that fields planted with fruits and vegetables by inhabitants of Biti e Ulët in Štrpce have dried up due to lack of water. Residents of national parks in which hydropower plants have been built have also told BIRN several times that their areas have had fewer visitors precisely because of the construction of hydropower plants, as they have greatly degraded the rivers that were part of the attraction for visiting.