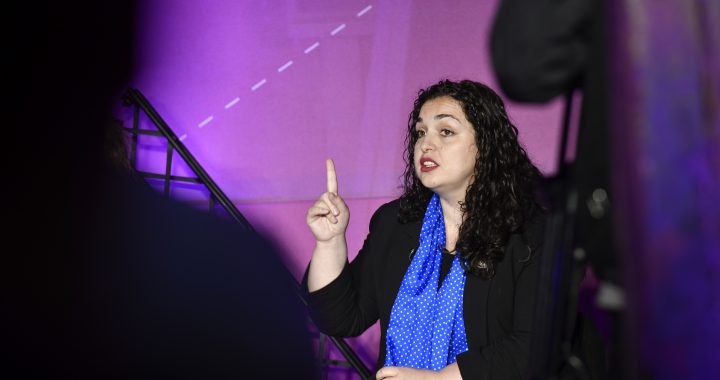 Despite being the only woman running for the position of prime minister in Kosovo’s upcoming elections, Vjosa Osmani is not addressing the needs of the country’s women.

The only woman candidate for Prime Minister in the general elections set to take place on October 6 is Vjosa Osmani from the Democratic League of Kosovo, LDK.

In the words of LDK leader Isa Mustafa, in this position as a woman and “a young mother” who has “the courage to face the turbulent waves of bad governance,” she deserves “widespread and unreserved civic support.”

However, judging by her pre-election campaign, Osmani is proving that although young, her rhetoric differs little from that of the elderly men in LDK. As a classic rightist, she is manifesting the same outdated approach and viewpoint of a typical Kosovar and Balkan politician.

As someone who has previously voted for Vjosa Osmani, there have been several occasions during her mandate as a Kosovo MP that have made me feel proudly represented and not regret my trusted vote to her.

Her sharp speech at the Assembly on survivors of sexual violence in Kosovo in 2013 was an inspiring and necessary addition to the session, in which the majority of both women and men MPs demonstrated a complete lack of human and institutional empathy.

‘Here is someone who listens, understands, and can protect us.’ This is the way I remember feeling after watching her on television; a more protected citizen of this country and institutionally represented.

At the end of 2014, she confronted Mustafa over his decision to enter into a coalition government with the Democratic Party of Kosovo, PDK. Later, she refused to cast her vote for Hashim Thaci to become president, not hesitating to express her professional autonomy in order to uphold her individual political principles.

I was particularly impressed with her in May 2015 when she ran for the position of leader of LDK, challenging the party leader, Isa Mustafa himself. A young woman with political ambition, she did not even question whether she deserved the position, and her challenge shook hierarchical principles and questioned male authority. Although her campaign was fruitless, standing on her own against the party’s head patriarch and its conventional structures was a solid emancipatory message, and a solid base to support Vjosa Osmani as a political voice.

However, these instances are not enough to truly represent Kosovar women, and while Osmani may be the sole woman running for the post of the prime minister, with this campaign she is not representing women.

Although she refers to her “potential as a woman,” (or as she has put it: “exactly, I dare because I am a woman,”) Osmani is proving that she lacks the theoretical knowledge and the practices used today to fight for gender equality and social justice.

She refers to the principles of ‘gender essentialism’, a concept that explains gender roles and policies based on the already obsolete theory that there is a biological and ‘innate’ essence that makes women – ‘women’ and men – ‘men’.

Deputy president of LDK, Lutfi Haziri recently stated that “it is manly to line up behind a woman like Vjosa.” In other words, the men in LDK are so strong that they are not afraid of having a woman among them running for prime minister.

This is both a patronizing and exploitative approach, especially during election time. Yet, this tone does not seem to discourage Vjosa Osmani. On the contrary, she seems to be satisfied with the concept of ‘representation’, and relies on ‘meritocracy’ when talking about that representation.

This was made clear in 2015 when she announced her decision to stand against Mustafa, and was asked by reporters about the state of women’s empowerment internally in LDK. In response, she stated that empowering women within the party would not be a goal under her leadership but that everything would be “merit-based.”

In the gender context, we cannot talk about gender equality without talking about gender justice. We cannot implement effective interventions in addressing gender discrimination practices without acknowledging the fact that it is women who are structurally and systematically discriminated against.

According to the Kosovo Agency of Statistics, in 2019 only 13.3 per cent of women are employed compared to 43 per cent of men. Even those who are employed tend to face the double burden of caring for their home, children, and other family members.

In one of her social media posts, Osmani was pictured at a rally in front of dozens of women and girls, and captioned the image: “Today I am surrounded by many women and girls. We can gain motivation and inspiration from each of us, for the path we have chosen all together, on behalf of all those ladies, mothers and daughters, across the country, who would fulfil a part of their dream by having a Kosovar woman leading Europe’s newest country, our Kosovo.”

This arrogance, by which she claims that women from this society “would fulfil part of their dreams” by seeing her as the head of government, demonstrates that Vjosa Osmani has no idea what the needs of women in this society are.

What these women need is not only an acknowledgement of the challenges that they, as half of the population, face on a daily basis, but for a clear strategic program on how to address and combat these challenges.

These women need solid promises on how all available laws on the protection of women’s rights will be implemented, on those legal and practical aspects that will be amended and supplemented, and other key aspects that will enable women’s challenges to be addressed as the most urgent priorities under her potential governance.

On a TV show that lasted for an hour and a half, Osmani unveiled her  program for governance in front of a team of analysts. She did not say one word that would affect Kosovar women.

It is frustrating and strange to see a young politician being unable to recognize the fatal consequences of patriarchal mentality within families and institutions, despite this pandemic of violence against women, and the drastic violation of human rights of various groups across Kosovo.

Today, anyone with just a little access to information on gender perspective, equality and justice are aware of the limitations that follow from such gender-blind views and requires much more than the image of a woman in the chair.

While in the past she has set an inspiring example when raising her voice within her own party, through this pre-election campaign she is proving that she has not moved forward, but has adapted to the outdated and patriarchal system of this political class.

In the “Feminism for the 99%” manifesto, the authors appeal against a neoliberal feminist approach that does not benefit women as a whole but only a small, privileged group of them. They urge us not to content ourselves with the concept of “smashing the glass ceiling”, and to reject those women politicians who, through their neoliberal views, are not representing the needs of different groups of women, but instead seek “equal opportunity domination.”

In 2019, the image of the “iron lady” is no longer relevant or necessary. Today we support the voice and actions of every politician who reflects on the human and civic needs of this society.

Therefore, if part of the rhetoric of the campaign is to portray ‘the woman’s power’ and the benefits of selecting a woman for such an important decision-making position, the debate should be broader, more complicated, and responsible.

This is because the intersection of gender and politics, as a concept, saves women’s lives, facilitates day-to-day living, and enables many people to exploit the potential they are currently denied. If no candidate knows or takes seriously the complexity of this dynamic, she or he does not deserve to talk about gender equality and women’s empowerment.