The mall Santas of Prishtina

For this holiday season, Prishtina Insight caught up with with Mr. and Mrs. Claus at their home at Albi Mall in Prishtina.

When not sporting a thick white fake beard, Valdrin Mexhuani generally works as a bartender or a waiter. This year was the first time he dressed up as Santa Claus to pose for photographs at Albi Mall. He admits that bringing joy to children might have been his hidden talent.

On the other hand, Qendresa Kutllovci is a veteran of the Santa business. She has been Mrs. Claus for the third year in a row. She works as a makeup artist when not busy greeting the children during the busy Santa season in December.

We met at their holiday setup as the holiday photo season was heating up during the first week of December, gathered around a set of yellow armchairs and couches. Behind us stood the christmas tree and colorful gift boxes. The faux windows and snowflakes over a full moon were a prelude to that nice snow that blanketed Prishtina that weekend.

We had just began our conversation when a gentleman came in to ask if Mr. and Mrs. Claus were available for a photo. We postponed our conversation, swiftly rearranged the chairs, and the gentleman signaled to his wife, who held their toddler in hand, to step into Santa’s home. The cheerful little lad remained smiling even when Mrs. Santa took him into her hands.

Mr. and Mrs. Claus took their seats on the yellow sofa, and held the little guy in the middle. The photographer pulled out the camera and began focusing the lense, while his assistant began jingling Santa’s bell to get the baby’s attention. The mother kept calling his name, and the grandma made funny faces and cooing noises at her six month old nephew, and snap, snap, snap.

This was the little guy’s first photo with Mr. and Mrs. Claus. Kutllovci said that they get many return customers. As the kids grow, they come to take the photo with the same Santa each year. 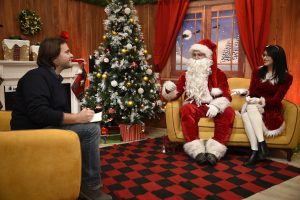 The New Year’s Santa of the Proletariat

Prishtina residents who grew up during the mid to late 1980s will remember Santa visits at their kindergarten. If my own memory serves me well, when I was a child, Santa’s thick beard was made of medicinal cotton bunched into shape. The long coat was maroon rather than red, and long dark hair would emerge from the improvised red and white hat. I distinctly remember that this Santa had a woman’s voice and wore pointy leather boots. But none of that mattered, since what all the kids really cared about was the gift bags they received — little sacks of transparent plastic with snowflakes and reindeer painted on them, full of sweets, chocolates, treats, and cookies inside. There may or may not have been a modest toy or a book, but who could remember amids that sugar rush.

Baba Dimri, in Albanian stands for Father Winter, and is similar to Deda Mraz in Serbian. In Albania he is called Plaku i Vitit te Ri, the New Year’s Old Man. Because of the melting pot of religions, ethnicities, cultures, and languages that is the Balkans, in Kosovo, similar to other places, Santa Claus, is not exclusive to Christmas, and the gift-giving is extended all the way to the New Year’s and beyond. This might also be a legacy that socialism and/or communism left in these lands as they tried to create ‘a new man,’ free of influences of religion, except for that greatest of the opiums of the masses, that of ideology.

It is rather puzzling how the symbol of capitalism and consumerism as a type of patriotic activity — our beloved Santa Claus — managed to remain, survive, and even be re-appropriated.

That is why in Prishtina, our current Mr. and Mrs. Claus will have their Albi Mall home open for business all the way until the New Years.

A job, not unlike any other

Beside toddlers and kids who take photos with Mr. and Mrs. Claus, they also get an entire family posing for a group portrait. “There are [even] elders, over 60 years old,” said Mexhuani, “they like to pose with their arm around my shoulders.” Then you get the tourists from the region, or internationals and soldiers who serve in Kosovo, or high school or college kids, who will try wackier poses, such as sitting on Santa’s lap or making faces.

But taking photos as a Mr. and Mrs. Claus is more difficult than one may initially think. Not all kids are as cooperative as the smiley toddler.

“Sometimes the younger kids, two or three year olds, are afraid of the camera or of Santa’s white beard,” said Kutllovci, and so the job of Mrs. Claus is to make them feel at ease. “So I usually ask them to come closer, and tell them that ‘Santa is good. He will bring you presents. Here, try touching his beard, see how fluffy and soft it is,’ things like that,” added Kutllovci.

Then, there are kids that don’t even want to take a photo with Santa but only with Mrs. Clause.

“There was this grumpy kid the other day we had trouble with,” said Kutllovci, describing a two-year-old who was having a tantrum and began to stretch all over the carpet because he wanted his parents to take him to the mall play area, asap. “I managed to get him to sit on my lap and finally got him to smile for the camera.”

It all seems so easy now, after three years, said Kutllovci. “But, the first year I started work, I didn’t know exactly how to bring in the kids and make them at ease.”

As we talked, a kid that was passing by stopped right in front of the door, staring at Mr. and Mrs. Claus. His eyes were wide in bewilderment, trying to soak in the entire scene, totally disregarding his parent’s calls from two steps away. That was when from across the store, Mexhuani and Kutllovci waved in his direction. The kid then responded with a smile, a quick wave, and ran with a waddle towards his parents as if he was shy.

Mexhuani and Kutllovci say that this is a very common occurrence, kids stopping by the door, and that is part of the job, to make them feel comfortable to come in for a photo. That is why whenever they are not on the set taking photos, they are busy waving at and greeting mall goers that pass their store, their potential customers.

Mr. and Mrs. Claus start work at around 10:30 in the morning. Instead of flying reindeer that pull Santa’s sleigh, the owner of the photo shop picks up Mexhuani each morning and they carpool together to Albi Mall. On the other hand, Kutllovci has an aunt that lives in one of the villages close to the mall, so during the Santa season, the entire month of December, she stays with her aunt in order to be closer to work.

“After December 15, we can’t even move off of the couch from how busy it gets in here,” said Kutllovci.

Nonetheless, when compared to his other jobs, Mexhuani says that the Santa gig is much easier.

“It is easier to deal with children, rather than with all kinds of grownups that you encounter [while working at the bar],” said Mexhuani. “Well, except for when you chance upon a case of a filled-up pampers,” he chuckled as he recounted a story when during a photo session he held a toddler on his lap, no older than one years old, pants filled to the brim. Santa had to hold him there smiling for the camera until the photo was taken. 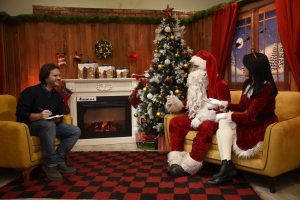 Gifts for the naughty and the nice

As we chatted next to the cosy fireplace of Mr. and Mrs. Claus’ home in Albi Mall, I couldn’t stop thinking about the kinds of presents I wanted, since I had been extra nice this year. But what kind of gifts do kids want nowadays, I wondered.

“Boys are all about Spiderman and Batman action figures,” said Mexhuani. “You also get requests for cars, toy ones that run on batteries, but also real size cars. They are very specific about the colors. They like to say ‘I want a blue car,’ or ‘I want a red car,’” said Mexhuani as he chuckled.

On the other hand, girls seem more comfortable to confide their wishes to Mrs. Claus, said Kutllovci, and added that it is often something in the lines of a Barbie or a doll with long hair.

“We tell the kids that they should be good and listen to their parents,” said Kutllovci. “We then tell the parents what kind of gifts their kids wished for.”

By the time kids turn five or six, they already seem to have formed a love for Santa.

“They often run towards you for a hug,” said Mexhuani, and explained how when he had just started and was in front of the shop greeting people, “this kid jumped on me from behind. It was the first time, and I almost fell down.”

But it’s all part of that love for Santa, said Mexhuani, from all the violent beard-pulling all the way to the occasional poke in the eye: “Almost blinding me through these fake glasses.”

When the masks come off

Kutllovci said that since her costume does not mask her face, kids all around town recognize her as she walks down the street on the off hours. There are also a lot of parents who are not sure where they saw her, said Kutllovci, as they forget that they see her face each time they look at the photo of their kid on the wall.

She worked the Mrs. Claus gig for three years in a row, and each year she had a different hair style, which could explain why people might recognize her but find it difficult to place her.

“The first year my hair was brown, the second it was white, and now black. People seem to like this last one the most,” said Kutllovci.

As a makeup artist, she is responsible for Santa’s gray eyebrows. Kutllovci says that it doesn’t take long compared to her own makeup, which takes anywhere between 30 minutes up to an hour. Since it is for the photos, it has to be impeccable.

By the end of the work day, when Mexhuani takes off his Santa costume, as he walks the mall galleries on his way home, it is the music and holiday jingles that remain with him.

“The tunes follow me in my dreams,” said Mexhuani.

As he keeps walking, upon encountering people, he often waves at them in an animated way, and greets them, and says hello. And once he notices that the people look at him funny or weird, he realizes he is no longer wearing the Santa costume. Being a Santa all day long gets to you.