A BIRN investigation has discovered that Kosovo’s ministries have paid out at least 2.5 million euros in salaries to former members of the Serbian Civil Protection Corps that are not showing up for work.

On January 5, 2016, M.M. was contracted to work as a higher education official at Kosovo’s Ministry of Education, Science and Technology, MEST. It is a position he still holds and is regularly paid for nearly five years later, but M.M. concedes to BIRN that he has never actually had to work for his salary.

M.M. is part of a group of 32 Kosovo Serbs employed by the ministry as part of an attempt to integrate former members of the Civil Protection Corps, CPC, into Kosovo institutions.

BIRN spoke to a number of former CPC members employed at MEST, many of whom say they do not show up for work but still receive a salary. Asked to explain this state of affairs, another MEST employee, B.S., gave two reasons: “Agreement and Vucic.”

The agreement he is referring to dates back to April 2015, when an EU-brokered deal led to the dismantling of the CPC, a parallel organisation which had operated in northern Kosovo since 1999.

The CPC was governed by Serbia’s Law on Emergency Situations, and acted as a first response unit to issues including forest fires and floods. However, the group also manned barricades on roads across northern Kosovo, and included individuals trained by the military who performed guard duty on the bridge that divides south and north Mitrovica.

As part of the agreement to remove the barricades and dismantle the organisation, Kosovo committed to opening 483 positions within its state institutions for former CPC members, who would be hired following clearance by EULEX and interviews by a mixed-ethnicity panel.

According to data obtained by BIRN, all 483 positions have now been filled, including 275 positions in Kosovo’s ministries, as well as in agencies including Kosovo Customs, the Kosovo Statistics Agency, the Agency for Emergency Management, the Tax Administration and the Correctional Service.

A small number of agencies have managed to fully integrate the new employees. For example, the Ministry of Justice tells BIRN that former CPC members employed at Kosovo’s Correctional Centres have regularly fulfilled their duties.

However, many former CPC members have received a regular salary for years despite failing to fulfill contractual obligations, or even appear at work, an issue repeatedly identified by Kosovo’s National Audit Office, NAO. In its audits of Kosovo’s ministries, the NAO has repeatedly urged institutions to cease payments made to employees who are not fulfilling their contractual obligations.

The full number of employees failing to fulfill their duties within Kosovo institutions is unknown. However, according to NAO data, in recent years nine of Kosovo’s ministries have paid at least 2.5 million euros in salaries to employees that are not appearing at work. 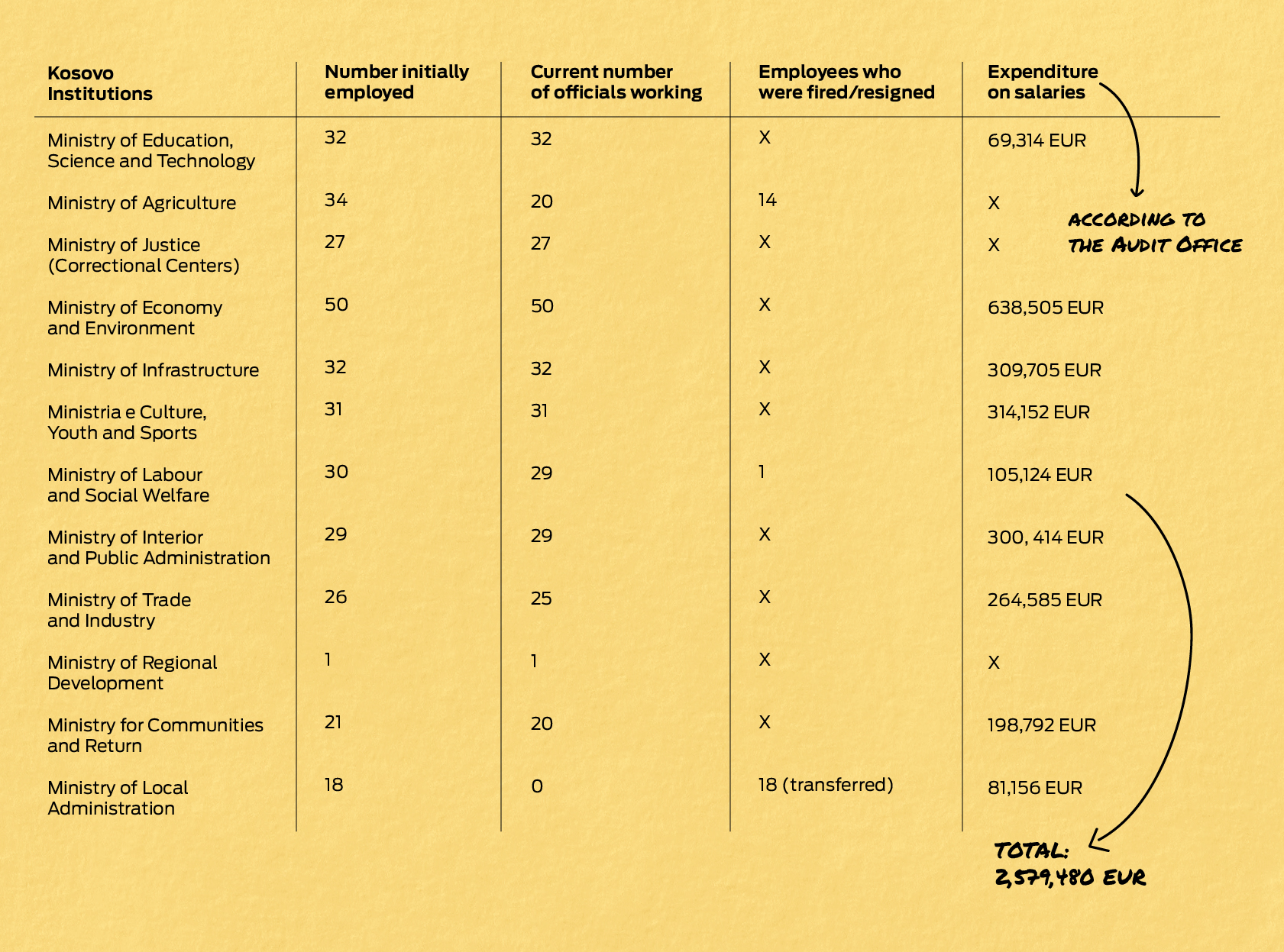 Despite the fact that 10 of the 16 current ministries in Kosovo have been criticised by the NAO, only one, the Ministry of Agriculture, has dismissed employees for failing to fulfill their contractual obligations.

Thirteen former CPC members were dismissed from two agencies operating under the auspices of the Ministry of Agriculture – the Agency for Agricultural Development and the Forestry Agency.

At the Forestry Agency, eight of the 18 former CPC members hired were dismissed after a disciplinary commission assessed that they refused to show up to work as either forest guards or forest technicians.

“Previously we applied light measures for these employees, such as verbal and written warnings, which then led to the termination of contracts,” the ministry tells BIRN.

According to the ministry, the same procedure was applied at the Agency for Agricultural Development, where five of the six former CPC members were dismissed, while the sixth resigned.

Other ministries did not answer BIRN’s request for clarification as to why they had not undertaken disciplinary actions against employees who were not fulfilling their contractual obligations. However, government officials told BIRN on condition of anonymity that pressure was applied by the international community to not have these employees disciplined or laid off.

The Ministry of Local Government Administration, which is responsible for implementing the 2015 agreement, tells BIRN that it has repeatedly raised concerns to successive Kosovo Governments on this issue, but it has yet to be discussed in a government meeting.

Meanwhile, the Ministry for Communities and Return, which currently employs 20 former CPC members and is led by Srpska Lista’s Dalibor Jevtic, states that it sent an official request to the Government of Kosovo and Ministry of Finance to seek a solution to this issue on 15 September, 2020. “We are still waiting for an answer,” the ministry says.

The NAO identified 20 employees at the Ministry for Communities and Return that were not fulfilling their contractual obligations in both 2018 and 2019. However, the ministry claims that the employees were mostly working in the field and were unable to register their attendance and states that the Kosovo Government has failed to provide, equip and renovate the necessary premises to begin work, as it is obligated to by the 2015 agreement. 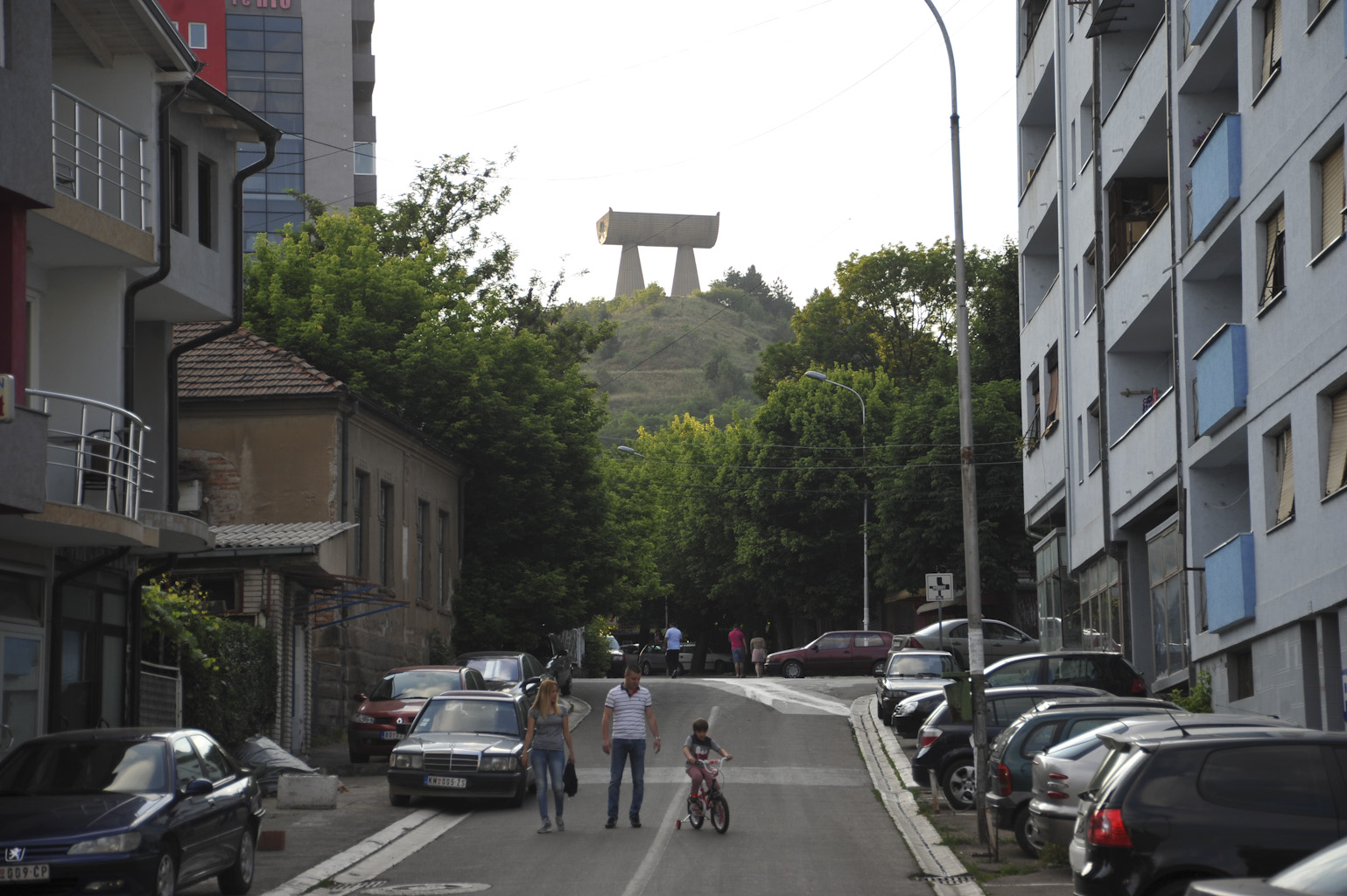 Former Minister for the Dialogue Edita Tahiri inaugurated an office in North Mitrovica in late 2016, but according to an NAO audit of the Ministry for Public Administration in 2018 it remains unused.

According to the NAO, the total expenditure on unused administrative buildings in the north totalled over 120,000 euros in 2018. The audit for 2019 stated that recommendations to address the issue had not been addressed.

BIRN contacted Tahiri, who brokered the agreement to integrate former CPC members into Kosovo institutions, to request a comment on its implementation but received no response.

The Prime Minister’s Office did not respond to BIRN’s queries regarding the issue, or how the situation can be resolved. However, the Kosovo Government did brief the European Union on the implementation of the agreement through a report in 2018.

The report, which was obtained by BIRN, outlined a number issues in implementation, including an acknowledgement of the failure to ensure former CPC members fulfill their duties. “In practice they do not exercise functions in accordance with Kosovo laws and contractual obligations,” the report states.

The report identifies a number of factors behind the failure, including issues around freedom of movement, the continued existence of parallel structures in northern Kosovo and a lack of effective communication between Kosovo institutions and the former CPC members. The report also highlighted that out of the 483 persons employed, only 25 were women.

The 2015 agreement obliged Serbia to cease any payment or financial support to CPC structures by April 2015. The former CPC members employed at Kosovo institutions that were contacted by BIRN all said that they do not work anywhere else, and do not receive payments from the Serbian government.

BIRN contacted the EU Office in Kosovo regarding the implementation of the agreement it facilitated but did not receive a response at time of publication.

by Xhorxhina Bami
Next: Opinion