With relentless caws by roosting crows and weary car engines that throng the streets, nightfall in Prishtina sets in gloomily. The golden hue of the setting sun fades into thick clouds, and incandescent spotlights start illuminating bits and pieces of the town.

As traffic jams thin out and people set out to knock back a few after work, bars and cafes shelter the chit chatting droves that flood the streets. Among the cacophony of radio-friendly tunes and muddled dance music, one can sometimes pick up the muffled rhythms of jazz gigs.

Although not very widespread, jazz in Prishtina perseveres. Every other night, in places like Dit’ e Nat’, Soma Book Station, Hammam Bar, and a few other spots, musicians pick up their axes and jam in seamless unison. From slick standards and fusion blends to intriguing flirtations with folk melodies, urban jazz in Prishtina has its unique tang.

Among the handful of jazz collections produced in Prishtina over the last ten years, the most recent was released by the Visar Kuci Trio: a collaboration between seasoned players who have been performing together since 2013.

Their first album came out in December 2017 after a cozy live performance at Dit’ e Nat’. The band consists of Visar Kuci on the guitar, Enver Muhamedi on the double bass, and Enes Bajramliqi on the drums. Typed in white font over the well-recognizable Radio Kosova building in the center of Prishtina, the title of the album is Modern Waves.

“The name derives from the modernist architecture in Prishtina, and the waves are the tunes in the album that are influenced by it,” said  Kuci, who composed five out of the six tracks of the album.

Kuci’s swift riffs can be heard all over Prishtina as he regularly plays gigs in bars and clubs around town. Although fellow musicians are aware of his strong points, one might be caught off guard seeing him play three or four instruments within the same performance. On top of that, he is a member of the Kosovo Philharmonic and teaches violin at the University of Prishtina.

“The instruments that I can play professionally at any time and place are the violin, the guitar, the bass guitar and the double bass. I also sing, but only the blues,” he said, as humbly as one can when making such statement. He can also be seen experimenting on the piano, mandolin and other instruments.

Kuci has been involved with music all his life. Having gotten his very first introduction to music by his father, who is also a singer and multi-instrumentalist, he recounts his first steps into the journey that took him where he is now.

“When I was little, I always used to drag my dad’s guitar around the house, I liked it a lot,” he said.

But Kuci temporarily set aside his early love for the guitar and decided to enroll for the violin. He stuck to it after primary school, later joining the Philharmonic as a young member.

“I continued having the violin as my primary instrument in high school as well, and that marks the time when I started really committing myself to music, practicing up to five hours every day. I didn’t have the usual life of a teenager, I was overly focused,” Kuci said.

What people still remember is that once I played a left-handed double bass effortlessly. From that moment, people sort of started taking me seriously as a musician. Visar Kuci

Towards the end of high school, Kuci got a scholarship to study in Munster, Germany where he spent four and a half years. He floated the idea of becoming a sound engineer, but kept concentrating on the violin and spent most of his days practicing.

He discovered jazz sometime during his studies, although he said that he initially conditioned himself to only play classical music and the violin.

“During my first semester of studies in Germany, I purposely did not own a guitar because I wanted to fully commit to the violin. After around two and a half months of not even touching a guitar, I played one at a music fair at school. I almost cried from the rush of emotions, I had really missed the guitar, and I understood that it is a part of me and I need to play it regardless of what happens with the violin,” Kuci said.

After that, he started discovering the few live music clubs around town and eventually joined  jam sessions, improvising with other musicians without much knowledge of jazz.

After concluding his studies and returning to Prishtina, Kuci rejoined the Philharmonic and started his career as a music teacher. Kuci remembers joining jam sessions at the Prishtina Jazz Fest in 2006.

“When I returned, there were not many jazz musicians in Prishtina, and those that played did not know me. I would join the jam sessions [at the jazz fest] after the concerts, and what people still remember is that once I played a left-handed double bass effortlessly. From that moment, people sort of started taking me seriously as a musician,” he said. 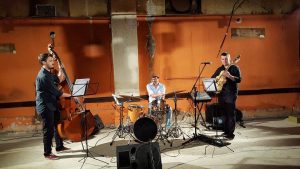 Visar Kuci trio playing at the Boxing Club. | Photo courtesy of the band.

Following the jazz fest, Kuci has been part of numerous bands, musical projects, and collaborations with a large number of local acts, including Genc Salihu, Shpat Deda, Gipsy Groove and Taste 2.

Having known Bajramliqi, the drummer of the trio, for many years, Kuci invited both him and Enver, whom he had heard play at a festival, to form the Trio. After about five years of playing together, the Trio came out with Modern Waves, their debut album. Besides the trio, Kuci and Bajramliqi are part of a jazz quartet with bassist Fatlind Ferati and saxophonist Dukagjin Muhaxheri called Gesundheit, and have weekly gigs at Soma on Tuesdays.

“To start a trio, you need a well-functioning chemistry between the players, otherwise it is very difficult. With Enes and Enver, it worked from the get-go,” he said. “The whole album was recorded within a day, it took about four or five hours I think,” Kuci said.

The album might have been quick to record, but it only came out post-production about two years later.

Bajramliqi, who is known for his many collaborations with artists like Genc Salihu (as Cute Babulja), Taulant Mehmeti and Fatlind Ferati (as Trio of Love), Taste 2 and Kuci (as Taste 2 & Goblenet), Elina Duni and others, said that he really enjoyed the process of making the album.

“It was one of the fastest album recordings I have ever been part of. The first reason is that I worked with remarkable musicians, the second was that the music was well-written and prepared, and and everything was stress-free,” Bajramliqi said.

Bajramliqi said that he initially did not have a clear picture of what the final product was going to sound like, but now enjoys it more by the day.

The creative process is much like a book, it’s a product of what you absorb for a certain period of time. Enver Muhamedi

“It’s a very relaxed album. To me, it sort of serves to relieve the continues pressure that life exerts onto us. I don’t really feel my presence anymore, I just listen to it as music,” he said.

Right now, Bajramliqi is working on two of his own personal albums.

Muhamedi, who studied jazz double bass in Turkey and is based in Istanbul, said that the process of recording the album was fun from start to end.

“The creative process is much like a book, it’s a product of what you absorb for a certain period of time. Visar’s album is pretty diverse, and during recording we told each other to take it easy on the notes, to have patience, so it turned out to be a really, sort of, cool album,” he said.

Muhamedi said that he is part of around 30 different musical projects in Turkey, and is currently working on producing  a compilation of all his composed music.

The first track of the album, an upbeat piece called “104,” was composed as soon as Kuci picked up a new guitar he bought some time ago. According to him, it is more of a mainstream piece and echoes many other recognized compositions in the global jazz scene. The numeric designation derives from his connection to his grandfather: considering the song’s common tune, Kuci recalls his grandfather’s iteration of the number 104 whenever he would talk about great number of things. Kuci specifically remembers him protesting against a new guitar for Kuci, saying that “he already has 104 of them.”

“Akordet” (Chords), the third track, was Kuci’s first ever jazz composition, drafted around 2004 or 2005. It is a relaxed traditional piece; Kuci said that he was influenced by a chord combination he found in a German music magazine called Gitarre und Bass. Apart from Kuci’s polished solo and Bajramliqi’s stainless flow, Muhamedi stitches the piece together with a rich bass line.

The fourth track, “Mangupi” (the troublemaker), stands out by name as well as by tune. Having a quicker pulse due to Bajramliqi’s skillful raps on the high-hat and timed rim-clicking, its rhythm makes one’s head bob. As for the title, Kuci said that the piece connects to Prishtina in that it is about the leaders of the place, or according to him, “the troublemakers.”

The fifth track, called “Eve,” is also a product of improv, yet this time between the members of the trio. The title comes from the initials of the first names of the members. The seven-minute long track constantly fluctuates in pace, rhythm and key, making it an exemplary experimental jazz piece. Furthermore, Kuci said that the solo is dedicated to Syrian refugees.

Kuci said that he cannot pinpoint a specific subgenre for the album; Bajramliqi and Muhamedi share the same opinion.

“‘Akordet’ is more traditional, ‘Eternal Space’ and ‘Waves’ are modal, ‘Eve’ is experimental, ‘Mangupi’ is sort of a hip bop thing, and ‘104’ has a mainstream vibe. The nexus is the city, the place where all of this happened,” he said.

Besides his album, Kuci said that there have been a handful of other jazz productions in Prishtina, like albums by the Trio of Love, Nesim Maxhuni, OM quartet, and others, which he thinks is plentiful for a small city like Prishtina.

Yet Kuci said that one of the primary problems that hinders the development of jazz is the lack of an well-established scene.

“The only music industry that exists in Kosovo is this sort of pop-folk genre, and this slows production down significantly. Even if there is a large community of jazz-listeners in Kosovo, there is so much jazz in the world that even if Kosovo does not produce any, they will have things to listen to,” Kuci said.

Kuci said that musicians in Prishtina do have an advantage over professionals hailing from other parts of the country.

“We have a sort of freedom in Prishtina, we have the opportunity to exchange experiences with international musicians, and there are a bunch of different streams that flow through, which makes it easier,” Kuci said. “I have always had the opportunity to live and work somewhere else, but I was always connected to this place. And, I am convinced that whatever happened here has much more value that things that might have happened elsewhere.”

Visar Kuci will be performing as a guest player with Nesim Maxhuni’s project ‘Homecoming’ at the Prishtina Winter Jazz Week, March 7 at 8:30 pm in the ASK amphitheatre.