After 17 municipalities elected mayors in the first round of local elections on October 17, the other 21 face a second round this weekend.

Kosovo’s Central Election Commission, CEC, on October 28 announced the final results of the first round of local elections held on October 17. According to the CEC, 21 of the 38 municipalities would go to a second round on November 14.

The local elections are expected to cost the state budget about 8.1 million euros, a rise on the 2017 elections, which cost 7 million.

The final results published on the CEC website, after the first round, show that the Belgrade-backed Kosovo Serb party, Lista Srpska, won nine municipalities, the Democratic Party of Kosovo, PDK, won four, and the Alliance for the Future of Kosovo, AAK, and the Democratic League of Kosovo, LDK, won two each. 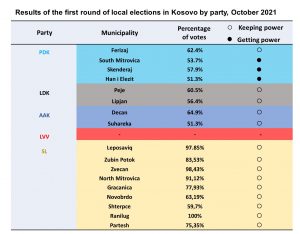 Kosovo’s Serb-majority municipalities were all won by Serbian List, raising concerns about real political competition in those municipalities.

PM Albin Kurti’s ruling Lëvizja Vetëvendosje did not achieve an outright victory in any municipality in the first round.

Vetëvendosje is running in 12 of the municipalities, the LDK in nine, the PDK in eight, the AAK in five, the Social Democrats, PSD, in one, Nisma in one, Lista Srpska in one, and the KDTP in one. 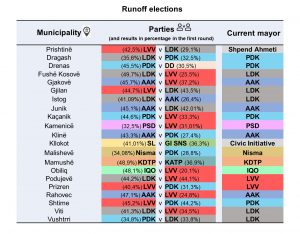 Hani i Elezit will have a new PDK mayor after it was confirmed that its candidate, Mehmet Ballazhi, won 50.98 per cent of the votes, while the independent candidate, Rufki Suma, came second with 42.47 per cent.

Initially, the Election Complaints and Appeals Panel annulled the elections in Hani i Elezit after complaints of irregularities by the independent candidate, Rufki Suma. This decision was later reversed by the Supreme Court. On Wednesday, the complaints panel confirmed that there will be no repeat of the elections there.

The campaign the second round of mayoral elections will last five days, from November 8 to 12.

The capital, Prishtina, is among the municipalities that will have a definite change of mayor, as the current mayor, Shpend Ahmeti,. did not run.

The runoff for the capital features Arben Vitia from Vetëvendosje who won 42.33 per cent of the vote in round one and Përparim Rama from the LDK who secured 29.35 per cent.

One municipality that has undergone a change of government is South Mitrovica, where the PDK’s Bedri Hamza defeated Vetevendose’s Agim Bahtiri, who was mayor for eight years.

The town hall will also change in Skenderaj as well, where the PDK’s Fadil Nura came first, besting the current chairman, Bekim Jashari, from the Independent List, which was ranked second.

In the last local elections in 2017, 19 of a total of 38 municipalities went to a runoff, while in the other 19 the winner was announced after the first round.

Compared to the first round of local elections in 2017, when LDK came first, in these elections we see a lead from PDK.

The final results, after the runoff of Sunday, will determine the real winner of these local elections.