Despite some advances in attitudes recently, many women in Kosovo are still imprisoned by expectations that a woman’s real ‘work’ is unpaid housework and raising kids.

The yard is narrow compared to the fields she has harvested. The new house is also small compared to the brick house she built more than three decades ago, with her own hands, in the village of Stroc in Vushtrri.

Once young and strong, 66-year-old Miradie Selimi can no longer walk easily due to problems with one leg. But she still does the housework she has done her whole life. She considers it an obligation that she survived – but never benefited from.

Her whole adult life, she has known herself only as a housewife, working for her family and contributing as a housewife – a woman in a “foreign tribe”.

“When I came as a bride, I cut bricks and made the oven … I had worked better in state jobs and received a salary,” she recalled.

“But then I had to do the housework, cut bricks, shuck the corn, and weed and clean.  I had to get up early to take care of the children and make breakfast and lunch,” she says, recounting her daily routine of more than 40 years.

Tired of the boredom, Selimi, who lives with her husband, still does much of that work even though she would rather enjoy her old age with a meritorious pension as a result of the work she has done.

For her, working all your life doing chores you are traditionally obliged to do, but in the end being unable able to muster even a few euros to visit family, or buy something for yourself, is a blow. 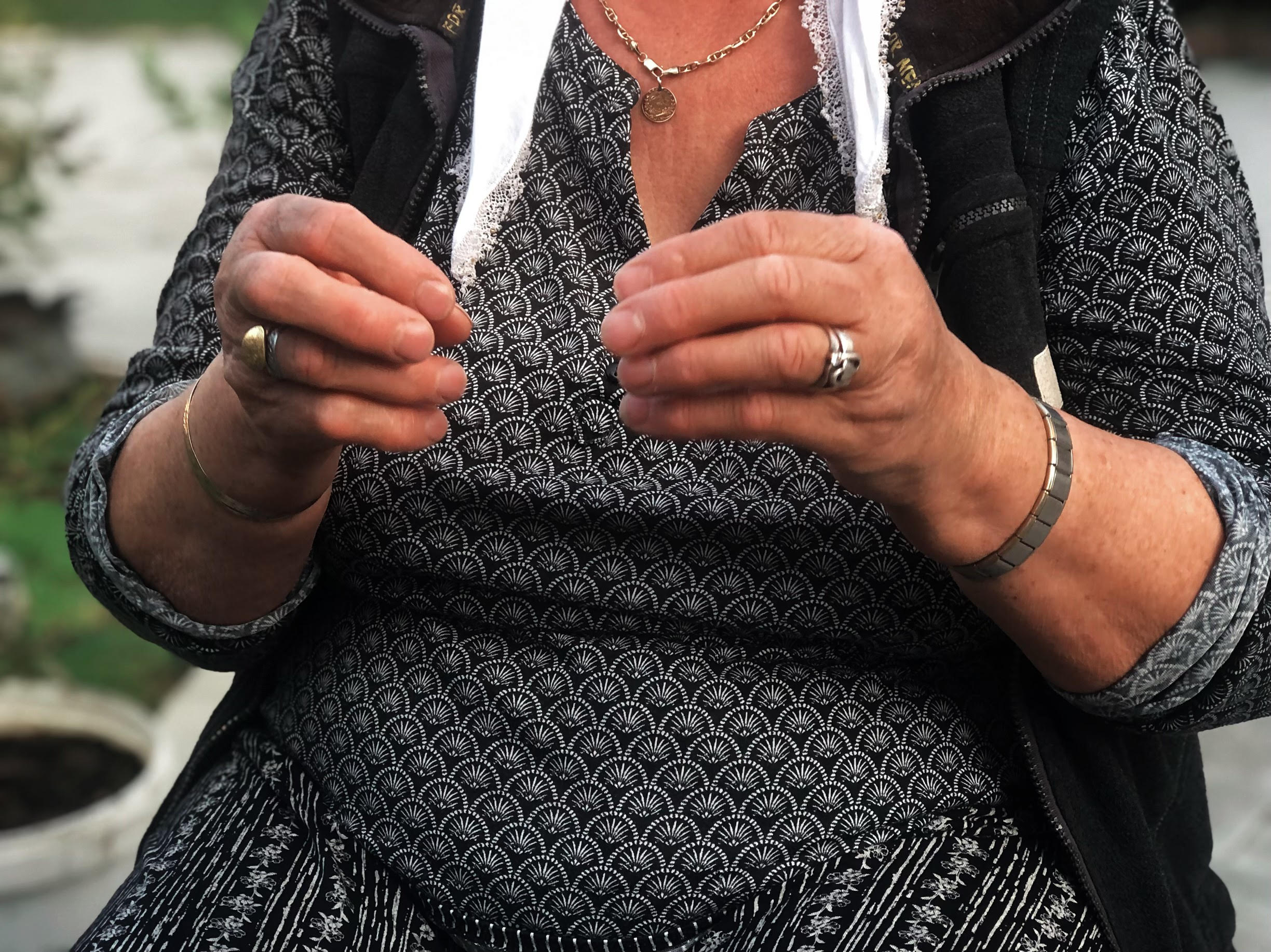 “We worked all day and no one ever gave us dinars [money]. We didn’t have our own money … It’s no life to work without being paid,” she says.

“I didn’t dare to beg for money from my husband or father-in-law, because they did not even have it for themselves,” she adds.

Her pain is accompanied by the fact that the hard daily work also prevented her from dedicating herself to the maximum to the upbringing of her children.

Forced to drop out of school at a young age due to the paradigm of “girls can’t go out on their own”, she feels she also failed to pass on her dreams to her children.

“We didn’t have the time even to teach our children,” she confesses sadly, saying that she hopes that every woman in Kosovo one day will become “a woman for herself.”

Such a life, which has handicapped many women in Kosovo, has forced them to live dependent on someone else, with no opportunity to prove themselves in the paid labour market.

Freedom has come too late in life

For Hatixhe Rrahmani, from Prishtina, life as a housewife has not been easy; on the contrary, it has brought her to a situation where she can barely buy medicine with her little pension of 90 euros.

The 73-year-old, who every morning takes her seat in the Ulpiana area of Prishtina, never lost the desire to be independent.

She now enjoys the freedom that unfortunately she did not have when she was younger. Now, she goes out and walks around her neighborhood every morning and evening.

“Then, I did not have the time to deal with the things I wanted. I had to work. We women are drowned in work all our lives,” she says. 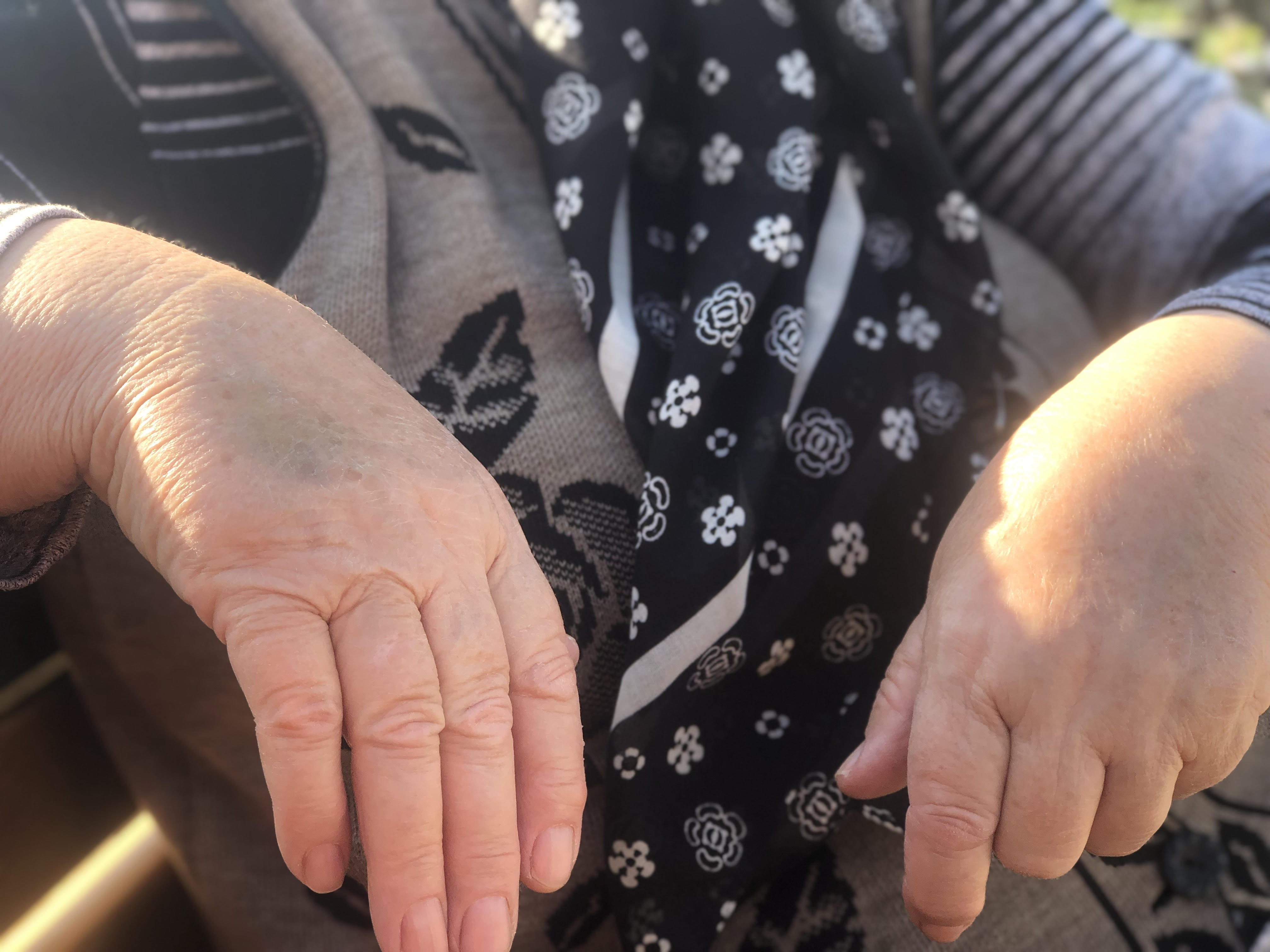 “It was difficult for us to ask our husbands for some money. We didn’t look for things to buy for ourselves, we didn’t even think of such a thing,” she recalls, of the difficult moments of her life.

But, compared to the situation years ago, Rrahmani says today’s women in Kosovo have become quite independent and hopes that this will continue.

“I worked in the fields and at home. In the darkness, I went out to harvest … I did the housework … I had [once] done something I was paid for, something public. Fortunately, the time for young women has got better,” she says, urging today’s young girls not to live a life like hers, but to go to school.

About 79.2 percent of women in Kosovo were registered as inactive by the Kosovo Agency of Statistics in 2020. A World Bank report states that family responsibilities are the main reason for women’s economic inactivity. The lack of childcare is also a problem, which is also influenced by social norms.

According to the World Bank report, in 2019 Albania had a female employment rate of over 50 per cent, the rate in Montenegro and Serbia was close to 50 per cent and in North Macedonia it was over 40 percent. In Bosnia and Herzegovina it was about 30 per cent.

By contrast, the GAP Institute in its 2020 report noted that the employment rate for women in Kosovo was only 14.4 per cent, while it was 46.2 per cent for men.

Data from the Kosovo Agency of Statistics (KAS) also show that the employment rate for Kosovo women is only 14 per cent. According to these data, of a total number of women of working age of over 600,000, only 85,601 are in work.

Its data say that in 2020, 7,557 women who applied for jobs had completed bachelor or master level degrees, while male job seekers with the same level of education numbered 4,370. The overall unemployment rate in Kosovo is about 30 per cent, and every year up to 25,000 people enter the labour market.

Getting women into work should be a priority 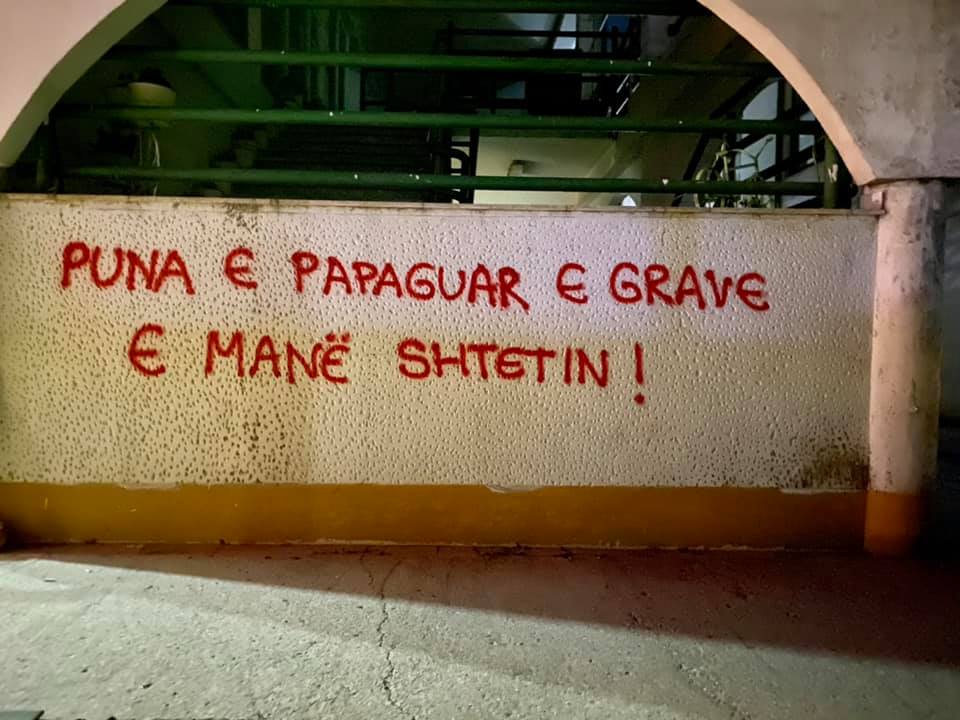 “The unpaid labor of women upholds the state”, a feminist inscription on a wall in Drenas. Photo courtesy of the Collective for Feminist Thought and Action.

The director of the Center for Gender Equality in Kosovo, Luljeta Demolli, says that social policy for the employment of women should be a priority for government officials.

Demolli says that populist policies should not be followed that further reduce women’s economic activity when the rate of women’s activity is already very low; their employment should be encouraged.

“They should be subsidized in agriculture, given greenhouses, create a social life, given courses at school, become active in the labour market, sell products and own farms,” Demolli told BIRN.

According to her, the right to work is a basic right, and institutions should give women more opportunities to place themselves in the labour market.

“If you tell a woman that the state subsidizes you, without giving her the chance to enter the labour market, you are not doing something that patriarchy has not done.  You put the whole burden on the woman,” says Demolli.

More incentives for women are needed

Theranda Beqiri, Professor of Economics and Business at Haxhi Zeka University in Prizren, says the low level of women in the labour market is closely linked to Kosovo’s culture and economy.

A 2017 Riinvest Institute survey on the time women spend working found that women in Kosovo spend an average of seven hours and 28 minutes a day in paid work, and another two hours and 57 minutes in unpaid work, caring for the family and doing housework.

The professor emphasizes that women’s unemployment in Kosovo depends in part on Kosovar traditions, the level of remittances from the diaspora and on a lack of motivation to report to the employment office, as the percentage of women finding jobs is low.

“One incentive would be to provide vocational training on the skills required in the labour market or to pay them social security when registered as unemployed, which is the practice in the Nordic and Western countries,” Beqiri told BIRN.

Data from the World Economic Forum for 2016 show that women around the world work an average of eight hours and 49 minutes a day, including paid and unpaid work.