A group of NGOs from Kosovo have sent a letter to the US authorities to reconsider its invitation for Kosovo in the Summit for Democracy, organized by the US president, Joe Biden, which will take place in December.

Kosovo has not been invited to take part in the Democracy Summit, that will discuss the advance of democracy, the fight against corruption and the promotion of human rights, to be held in December in the US.

While this has initiated a debate between the government and the opposition, a large group of Kosovo NGOs have sent a letter to the US authorities, to ask for a reconsideration of the invitation.

“We find the initiative very important from a strategic perspective at a global level, and highly relevant to our efforts locally”, said Agon Maliqi, one of the signatories of the letter, for BIRN.

“We find the exclusion of Kosovo from the platform to be further contributing to Kosovo’s isolation”, he added.

Other European countries not invited to the summit include Hungary, Serbia and Bosnia and Herzegovina and Turkey.

After news broke that Kosovo will not be invited, the spokesman of the US embassy in Kosovo, Eric Brassil, told BIRN that not all partners can be accommodated in this initiative, including Kosovo.

“The purpose [of the summit] is to bring together a regional and socio-economic group of countries and jurisdictions, including well-established and emerging democracies with diversity in population size, demographics and location,” the embassy said.

The American news site Politico on November 5 published what it said was the list of countries invited to the Summit of Democracies, and Kosovo was marked as a non-participant.

The Speaker of the Assembly of Kosovo, Glauk Konjufca, said Kosovo still hoped to participate in the second phase of the summit next year.

“These are important conferences, which the United States of America evaluates who is important to attend or not. It would have been welcome for Kosovo if it had been part of this conference,” Konjufca told RTV Besa.

Civil society remains hopeful too. “Our idea was that since there is still time until the summit, perhaps there is still some space to reconsider”, Maliqi told BIRN.

According to Politico, the summit will culminate with another meeting in 2022, when the achievements of this year’s summit will be discussed.

“The lack of an invitation for Kosovo reflects the level of Kosovo’s relations with the United States,” Hoti claimed, referencing Albin Kurti’s current government.

After it was confirmed that Kosovo will not be part of the summit, Hoti also ironically commented by posting a photo on Facebook of late Kosovo President Ibrahim Rugova in front of the White House.

The chief-of-staff of the President of Kosovo, Vjosa Osmani, Blerim Vela, dismissed claims that she has become isolated in the international arena, which is why Kosovo was not invited.

“The tendency of some opposition figures to create a narrative about the alleged isolation of the President is unfounded,” Vela said on Twitter, adding that the President has held over 30 meetings with her counterparts since April.

Although Kosovo has not been invited to the summit, the US embassy told BIRN that the US remains committed to cooperating with Kosovo and building its democracy.

“As President Biden noted in his August speech, Kosovo has made ‘tremendous progress over the last 20 years’ by building a resilient and multi-ethnic democracy,” it said. 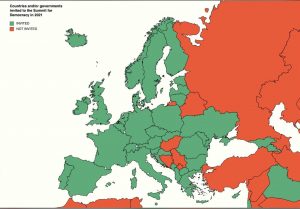 The green countries have received invitations to be part of the Democracy Summit; orange ones have not received an invitation.

Reports on Kosovo by the US Department of State have for three years in a row highlighted corruption and its non-punishment by Kosovo institutions.

At the same time, the White House has received criticism about to some “democracies” they have invited.

Shay Khatiri wrote in Bulwark that inviting countries like Pakistan or the Democratic Republic of Congo hurts the cause of democracy, demoralizes democratic forces and legitimize the brutalities these governments have perpetrated.

Politico said aides to President Biden are still setting the agenda for the December 9-10 virtual summit. “The list of invited governments has not been made public, although ‘Politico’ managed to get a summary on Thursday,” it wrote.