With coronavirus infections increasing in Kosovo, annual commemorations of wartime massacres that are usually attended by crowds of mourners have been replaced by low-key visits to loved ones’ graves and memorial posts on social media.

In the morning of March 26, villagers in Krusha e Vogel in Kosovo felt the same pain as they do every year as they remember their loved ones who were massacred by Serbian forces in 1999.

One of them, Agron Limani, said how his father, brothers and an uncle were killed that day, along with 109 other civilians from the village, in a house a few metres from where he lives.

The majority of the victims’ bodies were not found for years afterwards. The remains of Limani’s brother Luan, who was 21 when he was killed, were found in 2014 in a mass grave near Prizren, but three victims are still missing.

This year, because of the coronavirus epidemic, the annual commemoration of the Krusha e Vogel massacre was different. Instead of a large gathering of mourners, only close relatives went to the cemetery to pay tribute.

“At the graveyard were two other families, a few metres away,” Limani told BIRN.

“It was a very muted commemoration. It seemed to me that it was something with less respect. But at a meeting here in the village, we decided not to mark this anniversary due to the pandemic situation. It’s time to avoid everything and stay home,” he said.

Spring in Kosovo usually sees a series of large commemorations of wartime massacres that were carried out by Slobodan Milosevic’s forces after NATO launched air strikes against Yugoslavia at the end of March 1999.

But like Agron Limani, many relatives of massacre victims have been remembering their beloved ones by paying brief visits to graves or have stayed at home and posted commemorative messages on social media instead. 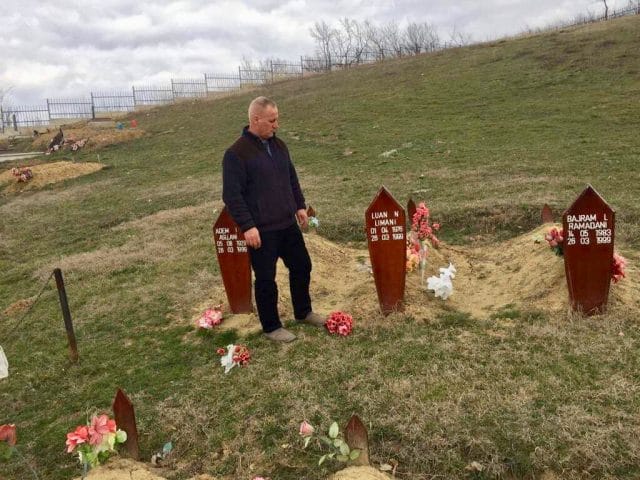 Kosovo’s President Hashim Thaci, who often attends anniversary commemorations across the country, has also been marking the dates of massacres with posts on Facebook. In his latest such post, Thaci commemorated those who died in the village of Rezalle, where Serbian forces killed 98 ethnic Albanian civilians on April 5, 1999.

“In this typical massacre of an unarmed civilian population by the Serbian state, it was mainly men who suffered, and it clearly showed the nature of the mass crimes against humanity [committed in Kosovo] for which none of the commanders and direct perpetrators have been brought to justice,” Thaci wrote.

Acting Prime Minister Albin Kurti also took to Facebook to commemorate the anniversary of a massacre in the village of Izbica in the north-western Kosovo municipality of Skenderaj, where Serbian forces killed 147 ethnic Albanian civilians on March 28, 1999.

“For 21 years, we have not been able enjoy the spring. Everywhere in Kosovo, every day during these months, we commemorate our loved ones, family members and friends who were killed or taken away by the fascist machinery of the Serbian state,” Kurti wrote.

‘It’s our obligation not to forget them’

Few officials have visited cemeteries to pay tribute on recent anniversaries of wartime mass killings. But one of them, Smajl Latifi, mayor of the southern municipality of Rahovec, has made speeches and laid wreaths at the sites of at least five of massacres in his municipality.

“Personally I have participated in commemorations of the 21st anniversary of massacres in Pastasel, Belacerke, Krushe e Madhe, Krushe e Vogel, Celine and Opterushe. Even in these hard times caused by the pandemic, I paid homage and respect to those who have fallen during the war, especially civilians,” Latifi told BIRN.

Latifi said that although he made speeches, very few people were there to hear him. “There were only heads of villages and rarely any family member of the victims,” he confirmed.

“I didn’t organise any gathering or call for mass memorials. I think I have respected the rules of the World Health Organization and [Kosovo’s] Public Health Institute. We maintained distancing and most of us had masks. Overall, it was a small homage, although I saw that the family’s pain was the same,” Latifi said.

As it battles to contain the spread of the coronavirus, the Kosovo government has imposed restrictions on movement and made repeated calls for people to stay at home.

But despite this, Latifi, a former member of the Kosovo Liberation Army, plans to continue paying tribute on the anniversaries of killings in the spring of 1999.

“During this difficult time I have made up my own joke. I say there is nothing to fear from tributes because the virus doesn’t come from the fallen,” Latifi quipped.

While family members and officials commemorate on social media, Latifi argued that it remains important to honour the dead in person. “It’s our obligation not only to respect them but not to forget what has happened here,” he said.

Shaqir Aruqi from Rezalle decided to go by himself this year to the village cemetery to commemorate the anniversary of the deaths of his two brothers.

Jahe and Isuf, whose remains were found in 2015 in a mass grave in Raska in Serbia, were among the 98 ethnic Albanians killed on April 5, 1999 in the village.

“I went alone and laid flowers at the graves,” Aruqi told BIRN.

“The memory and the pain was still fresh and felt the same.”

Standing strong in the face of political games