Mitrovica may be infamous for its ethnic divisions – but the local Rock School is uniting youngsters from both sides of town around a shared passion.

Ilda Krama, 19, is what she calls “a special case” in the divided town of Mitrovica – which has been split since the end of the Kosovo war between an Albanian south and Serbian north.

Krama’s background is as mixed as her hometown. “Most of my family lives in the north but we’ve lived in the south,” she explains.

“I attended school in Bosnian, Rock School in Albanian – and I speak both languages,” she adds. 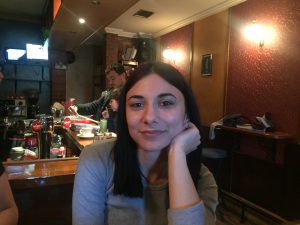 Ilda Krama is one of the 80 students at Mitrovica Rock School. | Photo: Sanja Sovrlic.

Now in her second year of architecture studies in the northern half of Mitrovica, she is the lead vocal of Proximity Mine, a band established under the auspices of the Rock School – one of the few organizations to function in both the southern and northern parts of town.

As a member of Kosovo’s Bosniak community, Ilda was caught between two stools since birth – collateral damage of the age-old conflict over Kosovo between Serbs and Albanians.

She lived in the mainly Albanian south of Mitrovica until August 2018, but then shifted over the bridge, across the river that divides the town.

“The band, and our acquaintance with each other, have opened up new perspectives for me. It was because of the band that I started studying in the north and moved there,” she says.

Ilda is one of 80 students of the Rock School, which was established in 2008 as part of the “Musicians without Borders” project, run by Community Building, an NGO from Mitrovica.

While hers might easily be a simple story of a young musician in a small town in southeast Europe, what makes it different is that she lives in a town that also routinely supplies the media with stories of ethnic conflict and political instability.

After the war ended in Kosovo, the Rock School was one of the first initiatives to rebuild bridges between the young in the northern and southern parts of the town.

This was not easy. It meant bringing together for the first time people divided since their early youth by the Ibar river.

The initial meetings were held in Skopje, in North Macedonia, as this was deemed “neutral ground.”

For most of the young musicians involved, it was their first-ever contact with people “from the other side.”

Bass player Lazar Mladenovic enrolled in the Rock School eight years ago, alongside studying physics at the Natural Mathematics Faculty. 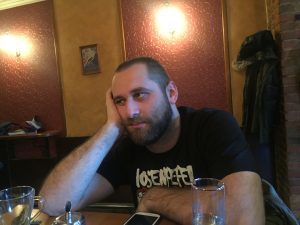 After attending the summer music camp in Skopje, he became the only Serbian member of the band from the north. The others were all from the southern, mostly Albanian, side.

As they had no common language, they spoke English, he recalls. “But communication was good – we were just a bunch of young people thirsty to play music. For all of us, this was the first common meeting and we blended in,” he says.

His bandmate, guitarist Alem Redzepagic, 22, says this experience was less of a novelty for him.

He has lived in more multi-ethnic surroundings, in different communities. Born in Mitrovica, he lived in the Kosovo capital, Prishtina, until 2014. Now he lives near the Mitrovica bridge.

“I had no weird feeling about cooperation. The school has neither improved nor damaged my views on all this,” he said.

Ilda shares that view, as she is not one of the many youngsters in Mitrovica who have never crossed the famous Ibar river bridge.

“My Albanian friend from the south was the band’s second guitarist,” Ilda notes.

“She had never crossed the bridge, except as a child, with her parents. Her parents were really doubtful about the Rock School, fearing it could go wrong. But when we started the band, they liked the idea, as we were using music to connect both sides.”

The band members recall their impressions of their first meetings. “First, we beat each other,” jokes Lazar, to loud laughter. “It’s a pagan custom, you know,” Alem adds.

With this laughter, it is clear these young people are not burdened by the political and ethnic tensions surrounding them. 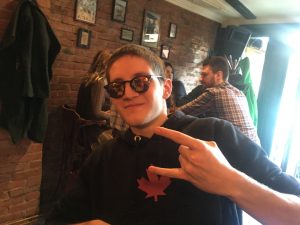 “At the summer Rock School held in Skopje, we had one sole obligation – to make music, and at the end of that week we organized a music show,” recalls 21-year old Milos Milovic, who started as a student but now runs classes at the school as a drumming assistant.

First trip to the ‘other’ side

Milizza Kosova, 31, has been part of the school since 2016. She manages a non-governmental organization working with young musicians. Not a musician herself, she is active in the work of the school.

Her job took her to North Mitrovica, with which she had no prior acquaintance.

Although various worrying news items might have deterred her from venturing to “the other side”, she felt curious.

But in the beginning, she drove to the north rather than walk across the bridge.

“I had to drive all around [Mitrovica], while it’s only a three-minute walk. But one moment, it became too much of a hassle, so I started walking. After a time, I felt totally free to go to the north alone,” she says.

She recalls this milestone from her office, which lies meters from the bridge that has seen so much conflict between Serbs and Albanians.

The European Union has invested 1.2 million euros in reconstructing the bridge to re-open it to general traffic.

It remains a subject of much symbolic activity by local and international officials, who often feel the need to have their pictures taken there. Even the EU High Representative, Federica Mogherini, has done so.

But locals move across bridge without feeling the need to present it as some sort of media event. And Milizza says friendships do exist across the bridge.

“Based on my experience from the Rock School, I see young people that are willing to be friends with each other,” she says.

“I know that from the past, as I had friends and neighbours of Serbian and other ethnicities. We always lived together and I see many people, especially in the south, who speak Serbian.

“I think people generally wish to overcome this issue, but it seems like a political issue that will persist for a while longer,” she adds.

Sitting across from her in the office is Emir Hasani, 26, a guitarist who also teaches piano and singing in the school, and acts as the program director.

Emir wants to be part of the rich musical tradition for which Mitrovica was once known.

“Mitrovica was once the biggest city in Kosovo and still enjoys that [musical] reputation. The best musicians in Kosovo, even those in Prishtina, come from Mitrovica,” he insists.

He used music to establish contacts with peers from the south.  “I knew no one [there] although we live in the same city and we all play music. I was born around the bridge but never knew them [musicians from the south],” he says.

“Now it’s different, at least for me … it could be odd for some youngsters. But after the first tryout together, we broke some barriers,” Emir recalls. “In the beginning, when you’ve just met someone, you can’t call them friends,” he adds.

He explains that, since 2011 there has been a new rule that bands must write their own songs, which was not the case until then.

Emir says it is important for school students and teachers to work on long–term projects, which is what working on a new song will ensure. 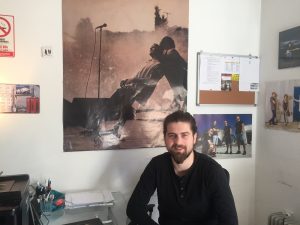 “They are working seriously to create something new – and they do create,” he says.

Emir also says it is easier to work together today, as most of the new students already know somebody in the school.

“They already have a picture of how it looks – to become friends and create with people from the other side,” he says.

Younger generations from either side of the bridge mostly don’t know the language of the “others.”

While music may be a universal language, English comes in handy to communicate in the course of musical creativity. All the songs are written in English.

“We have learned to speak with our hands and feet – in all possible ways,” jokes Alem with a smile. 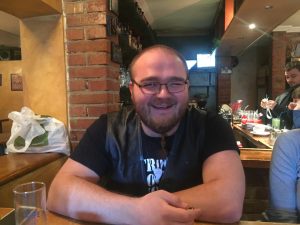 Other than helping her friends at the Rock School, she has also mediated other first-time contacts between Serbs and Albanians.

“As someone who speaks two languages it occurred to me, sitting at a hotel, that we were ethnically divided by tables. The Albanians would sit on one table and Serbs on another. Both parties would invite me to sit with them, so I would take a chair and sat between both of them,” Ilda recalls.

Forming links to the wider world

Through the Mitrovica Rock School, the youngsters also cooperate with other music schools from North Macedonia and with an academy in The Netherlands. It has enabled them to play with people from around Europe.

“It is very important … [as] we always had a problem of lagging behind Europe, but now this is no longer the case. Our students listen to similar music and play at the same level [as them],” Emir explains.

Since their first meetings in Skopje, on neutral ground, they have made important progress, “as activities are now held in Mitrovica, which was virtually unimaginable in the beginning,” he adds.

“It is wonderful to see young people who, despite the politics and all other problems, are willing to work together and be part of the same band,” Milizza claims. “You can see that are students are not afraid of being together, going to the north or to the south.” 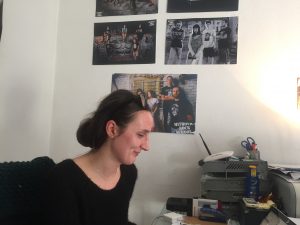 “Many of them are happy to do so, because this is a small city, so meeting someone from the north or south is much more interesting; they can make new friends and gain new perspectives,” Milizza says.

Members of Proximity Mine say they have had a chance play in Prishtina, including an appearance at the NATO peacekeeping KFOR base.

They had few expectations, so the warm audience reactions thrilled them. “They were amazing, some of them even knew our songs. I don’t know how, but they did,” Alem says.

“It is the best feeling in the world, to have the audience sing along with you,” Ilda agrees.

The school’s idea is to encourage individuality in its young musicians. Different musical genres are cultivated, though mostly rock, pop and punk.

“We’ve combined music for all tastes. We manage to mix it all. She [Ilda] is in some sort of indie-pop mood, while he is in a punk mood, and I am in a heavy metal and rock n’ roll mood,” Alem says.

“Milos has good ideas about rhythm, so he manages to scrabble something well. We’ve managed to combine everything we love to do,” Alem adds.

What they still miss most is the chance to perform more often. When asked where would they most like to play, almost in unison, they answer: “Wherever we can.”

by Die Morina
Next: News