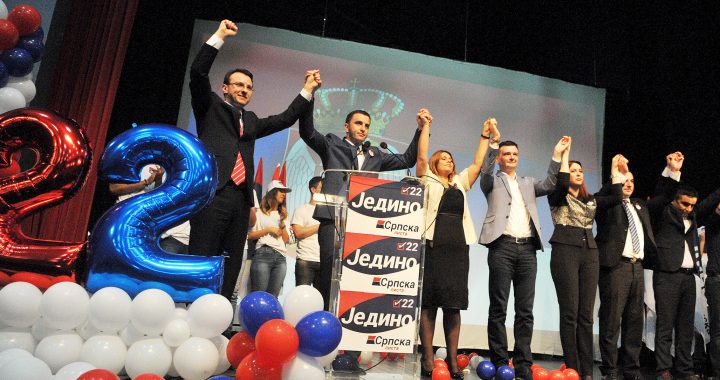 The Belgrade-backed Srpska Lista party on Wednesday said it will take part in early elections in May in the north, if only to stop Kosovo Albanians from taking over the municipalities it runs.

The main Serbian party in Kosovo, Srpska Lista, which is backed by the Serbian government, on Wednesday announced that it will participate in early local elections on May 19 in the north of the country. Kosovo President Hashim Thaci called the elections on Monday.

It said it reached the a decision to go to the polls “so that Albanians would not take over leadership of the northern municipalities”, the president of Srpska Lista Goran Rakic told the media.

The vice-president of the party, Igor Simic, had previously called the decision to call early elections “another provocation”.

President Thaci called the elections after the mayors of four Serb-majority municipalities in the north resigned in November, in protest against the imposition of tariffs on Serbian imports.

“We will hold meetings with our members and supporters, as we have to check whether they are willing to run this race with all risks that follow,” Ksenija Bozovic, from the opposition Freedom, Democracy, Justice party, told BIRN.

She recalled the atmosphere ahead of the last local elections in Kosovo in October 2017, when the media in Serbia broadcast a video targeting the head of her party, Oliver Ivanovic.

He was later assassinated, in January 2018, in front of his party offices in the divided north of Mitrovica.

Ivanovic had been an opponent of the main Belgrade-backed Serbian party, Srpska Lista, which is part of the Kosovo government.

The four mayors who resigned, who represented the municipalities of North Mitrovica, Zubin Potok, Leposavic and Zvecan, all represented Srpska Lista.

They quit on November 17, 2018, discontented with the government decision to impose a 100-per-cent tax on imports from Serbia.

The government said it had imposed the tariffs because of Serbia’s “aggressive policies” of obstructing Kosovo’s membership of international organisations. It imposed similar tariffs on Bosnian imports.

Some opposition Kosovo Serb politicians claim the decision was part of a secret deal Thaci had agreed with Serbian President Aleksandar Vucic.

“Is this another way to deepen the crisis in Kosovo? One thing is certain: this decision is the product of a deal between Thaci and Vucic,” veteran Kosovo Serb politician Rada Trajkovic, a former MP in the Kosovo parliament, wrote on Twitter.

Trajkovic told BIRN that she believes the further destabilization of Serb-majority northern Kosovo would serve the interests of both Vucic and Thaci, as “both of them need to prove to their own side that they have power”.

Bozovic, meanwhile, said that President Vucic should also consult with other political representatives of Serbs in Kosovo. “We are asking Vucic to hold talks with us as well,” she said.

She said she also wanted answers from the international community about how the candidates will be protected. “We don’t see much of change since the last elections and this is our main concern. We can’t go to elections and have more victims,” she said.

Another member of her party, Marko Jaksic, noted that two Serbian candidates that stood in opposition to Srpska Lista in the elections in Kosovo in 2013 had been murdered.

Ivanovic was killed last year, while Dimitrije Janicijevic, from the Serbian Liberal Party, who ran for the post of mayor of North Mitrovica in January 2014, was shot dead in front of his house. Like the Ivanovic case, his murder remains unsolved.

Meanwhile, Valdete Daka, head of the Kosovo Central Election Commission, said that organizing extraordinary elections in the northern municipalities would not represent a challenge for the CEC.

Daka also called on all citizens to participate in the elections and choose their representatives, the Kosovo newspapers Epoka reported.