Prishtina’s iconic Newborn monument was transformed into an urban interactive installation on Friday, dedicated to the struggles and perseverance of 99 Kosovo women, telling their own stories of success through portraits, quotes and augmented reality.

The faces of 99 inspiring Kosovo women will adorn the Newborn monument in Prishtina’s city center on Friday as part of an interactive urban installation, created by project director and journalist Lauren Peace.

The exhibit, named ‘Rimarrje’ or ‘Reclamation,’ features an interactive augmented reality application that plays videos of the women when visiting the monument. It aims to put the huge number of women changemakers in Kosovo at center stage, literally, by pasting their faces and voices across the country’s most famous landmark. 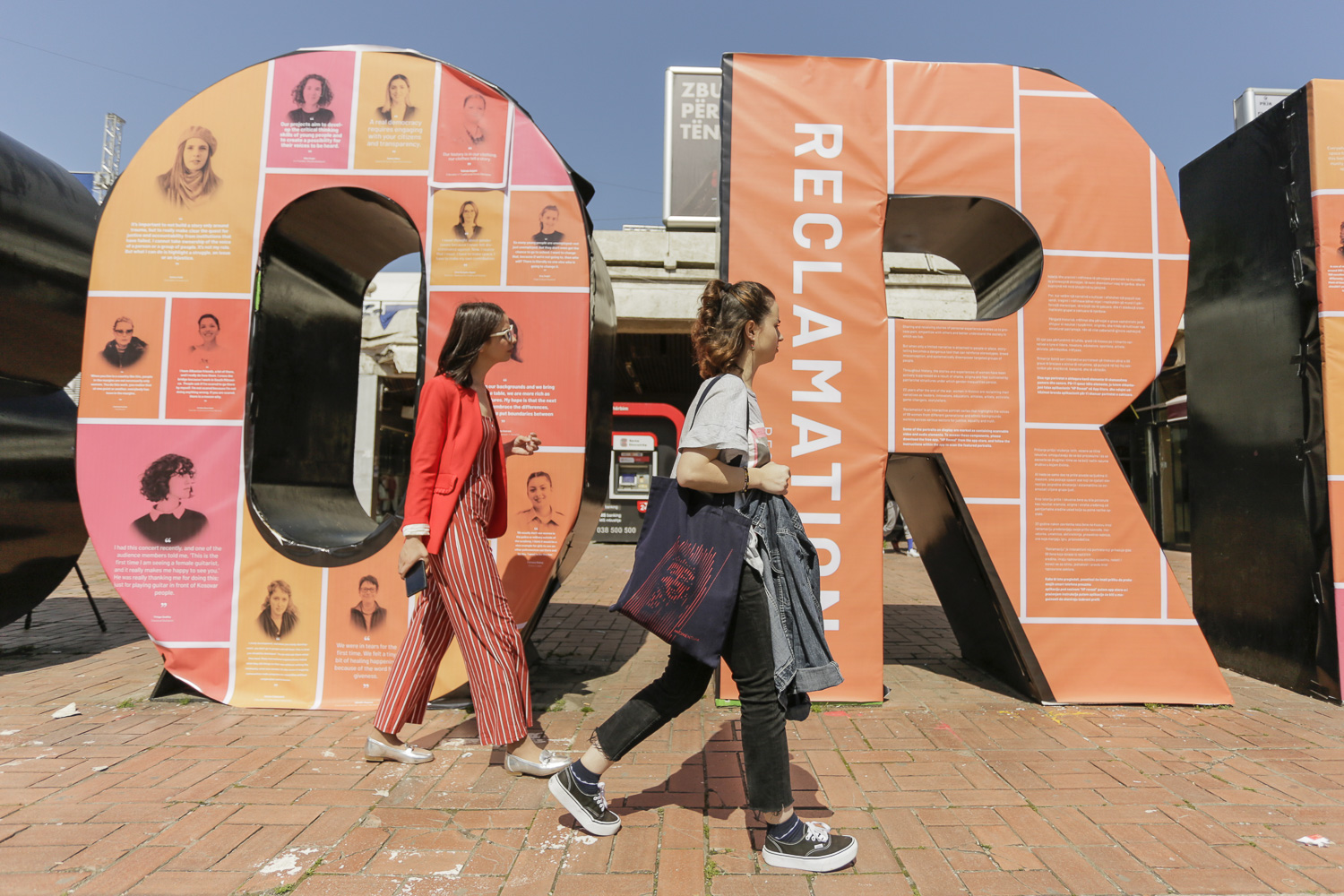 According to Peace, the installation also intends to send a wider message targeting the misrepresentation of the country in international media. Catching up on Kosovo’s history before she arrived in Kosovo for the first time in 2016, mainstream media organizations painted a grim picture of Kosovo, she said, notably as a predominantly patriarchal society.

“By the time I arrived, it was clear that what I’d read and learned didn’t match up at all with what I saw,” said Peace. “One of the first things I noticed was that there were a lot of strong women leading in their lives and their profession, and this made me question how global media outlets tell stories in connection to Kosovo.”

“I originally came to Kosovo with the intention to write stories about women who are acting as catalysts for political and social change, but while designing the project i was hyper aware of how journalists had misshaped my own expectations of Kosovo,” she continued.

To counter this trend, Peace decided to create a exhibition that allowed women to tell their own stories. Once she began seeking out women entrepreneurs, activists, artists, journalists and  musicians, a couple of interviews exploded into 99 interviews, she said, when the scale of both struggle and success of women in Kosovo became apparent. 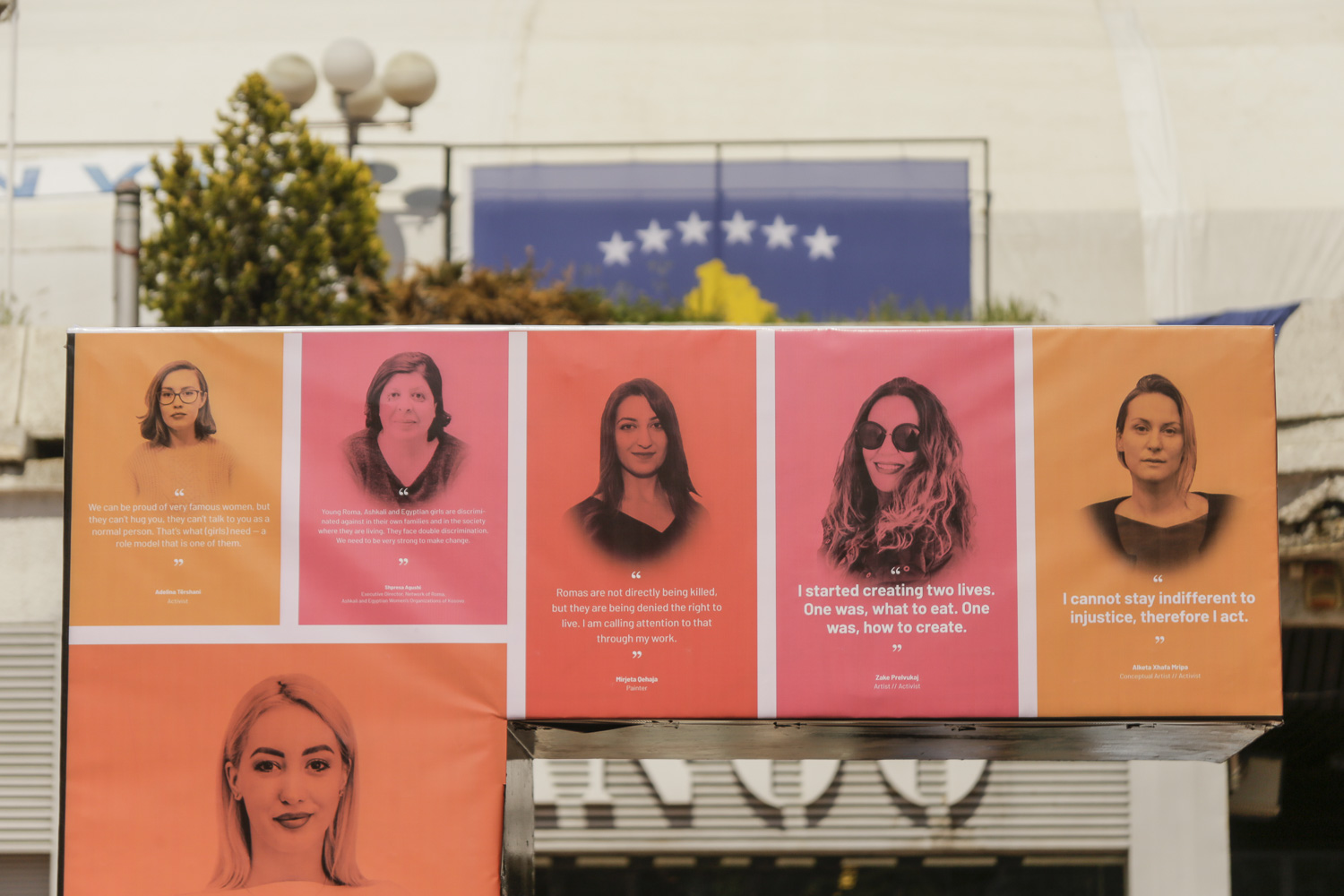 So that these inspiring stores couldn’t be ignored, Peace chose the Newborn monument as the location for the installation, to ensure that people who normally would never hear these stories would have no choice but to see them. The installation is being unveiled just before the 20th anniversary of the end of intervention in Kosovo in 1999, part of the reason Peace chose to feature 99 women.

“Some people said to me ‘why don’t you just do 5, or 10, or 20?’ But I thought that it wouldn’t have the same reach,” she said. “But if you do 99? People can’t ignore something of that scale, and in such a central location. If you can walk past the Newborn monument and away from an installation like that without taking notice, that’s pretty impressive.”

“I decided not to limit the audience at all, so it needed to be an outdoor urban exhibition that would both engage a huge audience passively, by just walking past and noticing it, and also actively, through the website that goes along with the project.”

Newborn has been given many different faces in the last 11 years. When it was originally built in 2008 by Fisnik Ismajli, it was painted bright yellow. In 2017, the monument was painted over with barbed wire to signify the country’s continued isolation from the rest of Europe, particularly the continued lack of access to visa-free travel in the Schengen area. Until Friday, the monument was covered in white, green and blue illustrations displaying Kosovo’s commitment to environmental protection and sustainable development. 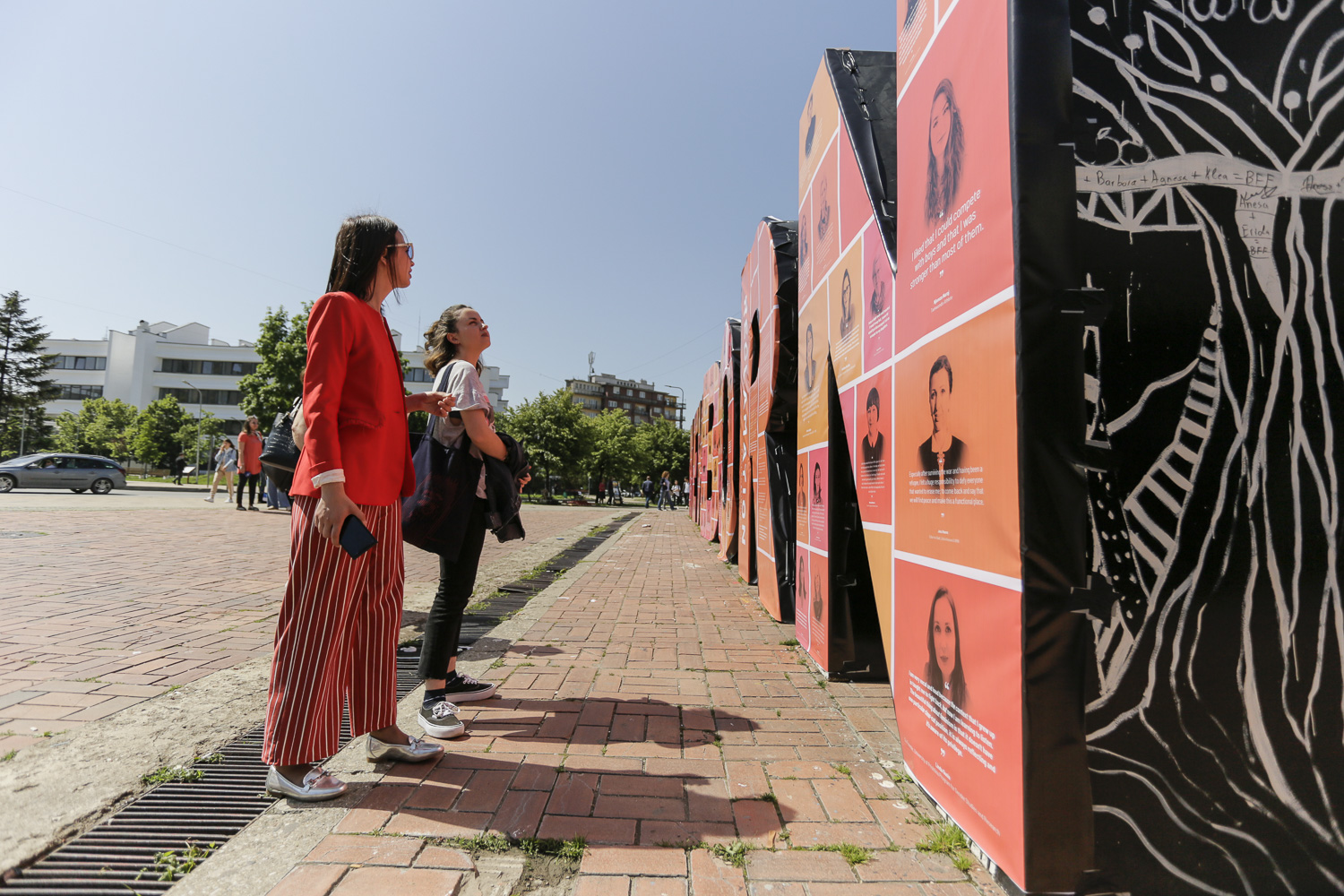 For the next week, Newborn will be surrounded head to toe with both portraits and quotes from the 99 women who told their story, created in collaboration with designer Steph Kotula. Translations of the quotes are available in Albanian and Serbian on the website that accompanies the installation, created with help from Griffin Jones and Monica Nguyen-Vo, which also includes biographies to learn more about those featured on the installation.

Peace also wanted to play with augmented reality, and has launched an app called HP Reveal alongside the installation that is available to download in the app store for free.

“You can visit the monument and open up the camera on the app, then move around the installation. As you move around, the camera will latch onto particular images and play a video,” Peace explained. “This will either be a short clip of the women telling their story, or a trailer for their film if they’re a filmmaker, or if they are a musician it will be them playing music.”

The project encompasses women across both ethnic and generational lines, said Peace, with the youngest at 15 and the oldest well into her 70s.

“It looks at those at the beginning of their lives and those who are now at the stage to step back and observe the success of the generations that will come after them,” said Peace. “There’s a mixture of women, you have figures like President Atifete Jahjaga, but also women that we would consider as ordinary.” 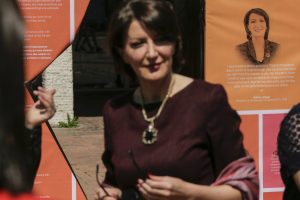 On the statue, you can find the face of Furtuna Blakaj, a 21-year-old police cadet that was born near Istog. Her family pushed her to be educated and encouraged her to take on a role not traditionally taken on by women, said Peace. “She wants to take part in building Kosovo, she went into the police to better herself and her country.”

Another inspiring addition to the Newborn monument is the founder of Astronomy Outreach Kosovo, Pranvera Hyseni. Hyseni was fascinated by space as a young girl, learning English in order to reach out to astronomers on Twitter, said Peace, then starting her outreach program to encourage young people and women to get into science and technology. “Her story is testament to women in Kosovo having some of the farthest reaching aspirations possible!” 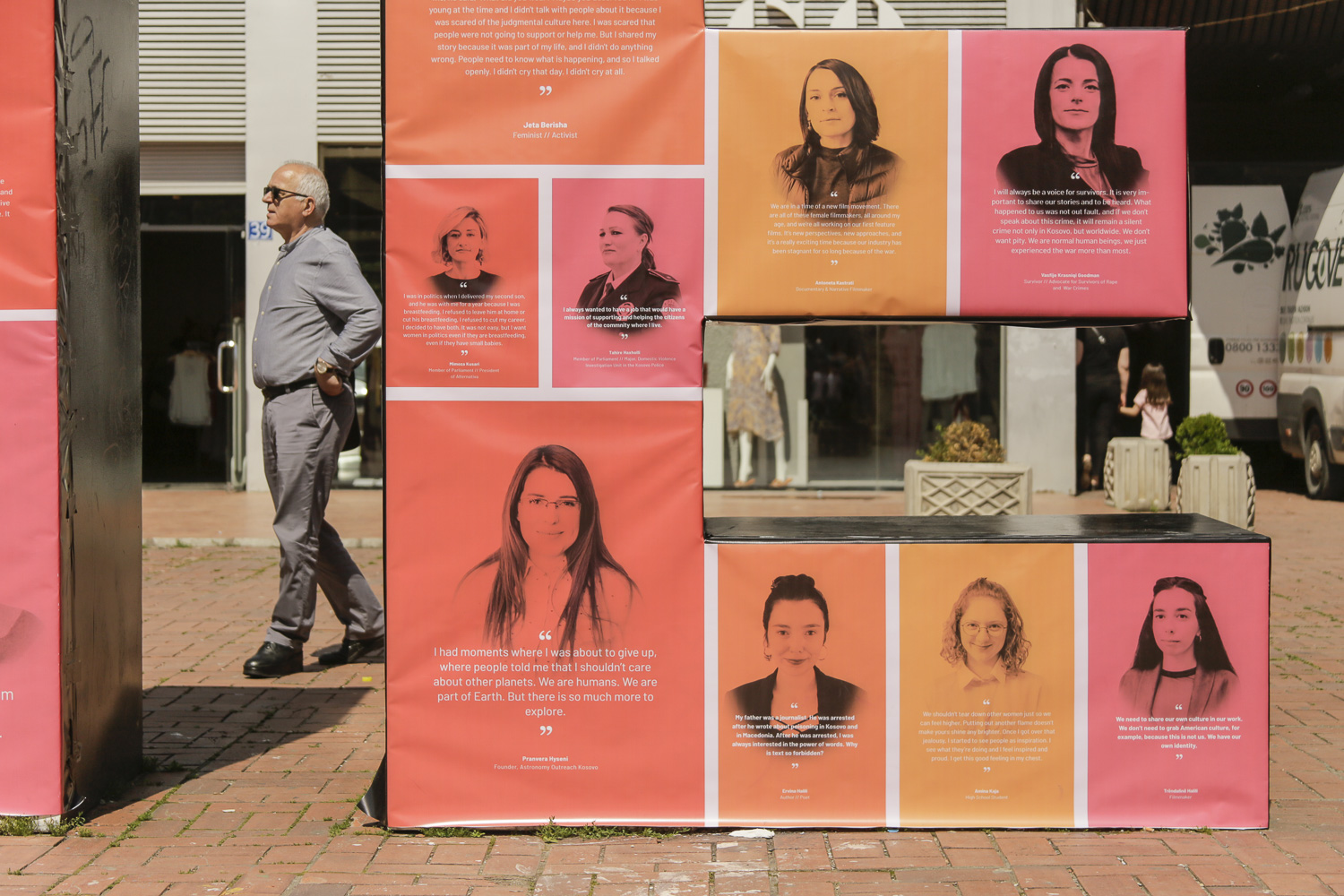 While it is important to share inspiring stories of women, said Peace, it is just as important for these stories to reflect the hard work it takes for women to succeed. “Part of this is to highlight that even inspiring stories do not paint a rosy picture,” she said. “They show the struggle and perseverance and success – telling stories that only show one side of the picture can be just as dangerous.”

Peace drew inspiration for this project from her experience in her home state of West Virginia in the United States, which is also constantly misrepresented by the media.

“West Virginia is treated in the same way by media, only news that is in some way terrible or absurd gets reported,” she said. “It’s just telling of the clickable news cycle that we have fallen into, but it’s a problem when the story is about a small country that does not have the ability to counter the narratives that they create.”

According to Peace, this misrepresentation can be incredibly powerful in the way it informs others. Often, lack of available media resources hinders those outside of Kosovo from having an understanding of Kosovo beyond the eyes of international reporters.

“Coverage seems to always fall into the well-known tropes of post-conflict reporting, talking about the scars of the war,” said Peace. “While I would never want to belittle the important place that stories like that hold, if I were to read only stories like that, it would completely distort the picture I had of those countries.”

This frustration pushed Peace towards taking representation into her own hands and reclaiming narratives around women, and around Kosovo.

“When all you hear about are the most disadvantaged parts of that one society, pushing this narrative continuously will begin to then inform your perception of self. Then you feel that you have to be the one to impact change,” she said. “In places like both West Virginia and Kosovo, hope is one thing that we cannot afford to lose.”

To learn more about the exhibition and how to download the app, visit the website for Reclamation, which will be updated with more content, and in-depth interviews of the 99 women featured in the exhibition in the coming months.

‘We will not preach to the converted:’ Femart festival opens