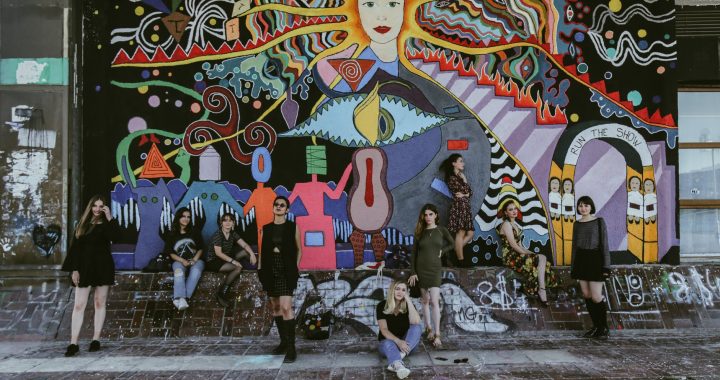 Femart's 2018 festival mural in Prishtina. A second mural will be unveiled during the 2019 edition. Photo: Femart.

‘We will not preach to the converted:’ Femart festival opens

On Monday evening, the 7th edition of Femart festival opens at Grand Hotel Prishtina with a symbolic artistic performance targeting the sexual violence perpetrated within the very walls of the hotel 20 years ago.

While the seventh edition of Femart festival will fill cultural venues across Prishtina with engaging displays of art, music, theater and poetry for the next seven days, the festival will open with one of its most politically poignant performances yet.

According to Zana Hoxha Krasniqi, founder and director of the festival, their launch event will be an artistic performance hosted at a site where wartime rape and sexual violence was committed against women in Kosovo.

“Following the war, people who worked in the Grand Hotel in Prishtina found evidence of crimes inside the hotel, but no organization opened up investigations or looked further into what was found there,” Hoxha Krasniqi explained. “This will be an onsite artistic performance aiming to bring back the voice of the survivors.”

Femart’s opening performance, of which Hoxha Krasniqi divulged few details, will be held at 20:00 on Monday at the Grand Hotel in the center of Prishtina.

Partnered with Femart’s opening performance, a conference on Tuesday will invite survivors of wartime rape to discuss the perceptions and stigma related to gender-based and sexual violence, named ‘Unbroken – wrong place, wrong time.’

“The aim is also to counter the general perception that rape and wartime sexual violence only happened in rural areas in Kosovo,” Hoxha Krasniqi continued. “There were no investigations carried out in Prishtina, the capital, whatsoever.”

The conference will also explore the recent scandal involving MP Flora Brovina, who displayed falsified images of wartime rape during a Kosovo Assembly session last month. “Survivors are terrified now that visual evidence that survivors have provided will be exposed. Our idea is to provoke institutions about this,” said Hoxha Krasniqi.

With this two-pronged approach blending art and activism, Femart is reframing the traditional view of what an artistic festival should look like, but also transforms how we approach discussions on justice, politics and feminism.

Acknowledging that conferences are a tool overused by organizations in Kosovo, Femart takes this tool away from the grasp of usual suspects like NGOs, embassies and politicians, said Hoxha Krasniqi, inviting them as spectators only and giving the floor to women and survivors.

“We want to tackle the issue of sexual violence without preaching to the converted,” she said.

A second conference will be held on Wednesday morning, where Ilirjana Banska will introduce her report ‘Abortions in Kosovo: an analysis of induced abortions and reproductive health from 1999-2019.’ Medical experts, researchers and health organizations will discuss how abortion in Kosovo has changed in the last 20 years.

“There has been barely any analysis done on this issue,” said Hoxha Krasniqi. “There are only four clinics that are actually regulated and registered to conduct abortions in Kosovo, but they happen all over the country.”

Every year, Femart proves to be a space for both artists and activists to gather and share their work, as well as where audiences can enjoy entertainment and education in a non-commercial way.

Highlights for the festival include a poetry exposition on Tuesday evening at Menza Ramiz Sadiku, featuring Albanian poets living across Europe. The poetry evening, whose theme is ‘power,’ will be accompanied with music from Albulena Jashari and Faruk Banjska. “We want to bring power back to women poets, to counter popular narrative that men poets are the only ones worth celebrating,” said Hoxha Krasniqi.

On Wednesday night, a travelling drag show created by Hungary’s Veronika Szabo named ‘Queendom’ will perform in Oda Theater, “playing with how drag shows relate to women and queer identity.”

A panel discussion featuring women artists from Kosovo, Albania and Serbia will be held on Thursday at the Kosovo National Gallery, discussing the role of women in decision making in the art world.

Art and community center Artpolis, the organization that runs Femart, also produces an original performance every year. For this edition, a street performance named ‘Women’s Kanun’ will premier at the National Library of Kosovo on Friday evening.

Femart is shaped not just by artists and activists that are involved in the performances, but also the more than 30 young volunteers from different ethnic communities in Kosovo, who according to Hoxha Krasniqi, will be the future pioneers of change in the country.

“They’re not just volunteers, they are getting involved so that they can make friends, make connections with activists and artists and get exposed to the program. Learning about the feminist movement and different ways of thinking, it can be a life changing experience,” she said.

“This is one of Femart’s purposes, not just for young people to help out, but also to engage and grow in a way that our education system cannot provide,” Hoxha Krasniqi continued. “This way they can be exposed to different possibilities.”

According to Krasniqi, this has already proven to be a success. Previous beneficiaries of Artpolis programs are now helping to spread their work across Kosovo.

“One teacher who works in Mitrovica, who was part of the Artpolis theater program back in 2006, is now putting what she learned from us into practice and is key to getting students involved in the festival,” said Hoxha Krasniqi.

Femart’s launch event will be held on Monday at 20:00 at Grand Hotel Prishtina. Click here for more information about the festival, and here for the festival’s full program.