On Saturday evening, the 64th final of the Eurovision Song Contest will be held in Tel Aviv, with Kosovo nowhere in sight. Fans in Prishtina are wondering: why isn’t Europe’s youngest country joining?

“Our third finalist for tonight is, Albania!”

The cheers coming from the President Sports Bar in suburban Prishtina are deafening.

Albania made its way through the semifinal and qualified for the finals of the Eurovision Song Contest, to be held on Saturday night. Eurovision fans from Prishtina, who waited with bated breath to see if Albanian singer Jonida Maliqi could outlive expectations, were rewarded in the end.

The small group of avid watchers wave red flags with the black double-headed eagle, but the blue and gold colors of Kosovo are nowhere to be seen. Kosovo has never been allowed to participate in the contest, and remains excluded from the Eurovision family to this day. 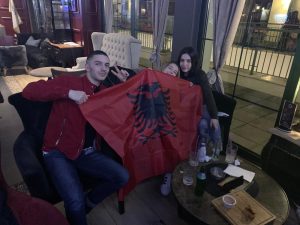 It shows. Only a few fans showed up at the public viewing of the semifinal, unsurprisingly, considering that the bar is located in the gated Marigona residence – 11 kilometers from the city center. A group of students from the University of Prishtina took a taxi, just to see the semifinal, and will do so again when Maliqi performs in the final.

It takes effort for fans to watch the contest, since bars in downtown Prishtina do not screen it. “I think they should,” Denis Maxharraj, manager of the President Sports Bar, complains. “We are a sports bar, but we should show every competition.”

One of the reasons why other bars are not as eager as Maxharraj to screen the contest might be the lack of a Eurovision fan culture in Kosovo. The fact that Kosovo still does not take part in the contest makes even hardcore fans cynical about the possibility of future participation.

“There is no big fan base here in Kosovo,” one fan says holding an Albanian flag, sighing. “It is not interesting enough if we do not participate.”

Weeks earlier, a group of fans gathered in a coffee bar in Prishtina to talk about their favorite Eurovision entries. The Netherlands is mentioned often, Italy called this years’ outside contender. Albania’s Jonida Maliqi is set to surprise the audience with her performance. “Jonida told us it will be special, but we have to keep it a secret.”

Erdin Janovali, Gezim Sahiti and Albert Limani are no ordinary fans of the song contest. To catapult Kosovo to the Eurovision stage in the near future, they started a fan page on Facebook and Twitter in 2010 called Eurovision Kosovo. The young country’s participation in the event has since been its most important goal. They are now followed by over 10,500 Eurovision fans, commenting on their Facebook page and sharing their posts.

By staying in touch with the Kosovar public broadcaster, RTK, and the European Broadcasting Union, EBU, that organizes the event, Eurovision Kosovo wants to make sure that Kosovo’s interests are not forgotten. Through the page, the fan group wants to promote the music contest in Kosovo and create a fan culture.

Janovali is convinced that there is a Kosovo fan base, eager to see their country debut in the contest. “Kosovo is still not a part of Eurovision. But, we have a lot of top fans at the base that are always there and are interested in what we are doing.”

Still, Sahiti realizes that Eurovision fan culture in Kosovo is far from established. “The base is not that great, we have to be honest. There is a small base of hardcore fans, especially Kosovars who live abroad. But, you also have the people at home who just watch Eurovision with family.”

The final is usually broadcast in some bars and embassies, but this year, without a Kosovo Albanian participant in the contest, some lost interest – Serbian contestant Nevena Bozovic is from Mitrovica, but supporting her proves to be controversial, according to Eurovision Kosovo, after they received hateful responses for supporting her on the page.

The friends are convinced that there would be more interest in the contest if Kosovo participated. But they wonder: why is that not the case? The fact that non-European countries like Israel and Australia have joined feeds the discontent. Israel has participated in the contest since 1973 and has won four times. According to the fan group, Kosovo should be able to participate, if countries outside of Europe do already.

Becoming part of the Eurovision family

Eurovision, a song contest held annually since 1956, started as an innocent music show with seven competitors. In six decades, it transformed into a professional music competition in which over 40 countries take part.

Despite the fans’ discontent, not every European country is entitled to participate in Eurovision. In fact, artists officially do not participate on behalf of their country, but rather represent a national public broadcaster, which would be RTK for Kosovo. In order to send an artist to the contest, a broadcaster has to be a member of the EBU.

Organizing Eurovision is what the EBU is best known for, but the union does much more than that. It is an alliance of public service media with 117 member organizations. According to the EBU’s website, their members operate in 56 countries, mostly in Europe.

Second, the country must become a member of the United Nations or have the support of a two-thirds majority of ITU member states.

Since Kosovo failed to join Interpol in November last year, the country has been hesitant in its attempts to achieve further recognition from the international community. Following its defeat, RTK requested that the General Assembly of the EBU should not discuss Kosovo’s membership of the organization during a meeting in December 2018.

Although Kosovo is not a member of the EBU, Eurovision has been broadcasted in Kosovo since 1961, when it was a part of Yugoslavia. Kosovar broadcaster RTV Prishtina tried to get their artists selected through the national final Jugovizija – competing against participants from other constituent republics and autonomous provinces of Yugoslavia – annually, but their act never won.

Still, in 1982, the first participant from Kosovo debuted on the Eurovision stage. Kosovo Serb singer Snezana Miskovic from Vushtrri represented Yugoslavia as part of the Serbian pop group Aska.

It would be decades before the first Kosovo Albanian made it to the contest. In 2012, Rona Nishliu achieved a historic fifth place, flying the flag for Albania. 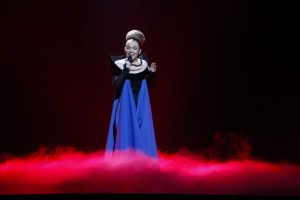 Nishliu describes her Eurovision experience as an “absolute honor and a privilege,” although she did not represent her own country. It was “a feeling I will never forget,” she tells Prishtina Insight.

She agrees that future participation in Eurovision could be significant for Kosovo’s music scene. “Kosovo is a small and young country,” she said. “Any international opportunity is of high importance in promoting great and young potential in music.”

Kosovo may not have entered the Eurovision Song Contest yet, but public broadcaster RTK has been preparing the country’s entrance for years. Although not being an official member of the EBU, the broadcaster was invited to take part in the Eurovision Young Dancers event in 2011.

Also, the country participated in the first edition of the Turkvision Song Contest in 2013, a Turkic counterpart of the Song Contest organized by the International Organization of Turkic Culture. This year, RTK plans to send folk and pop singer Leonora Jakupi to the contest in Ankara. A date for the event has not yet been set.

Lorik Arifaj, the television director of RTK, thinks that it is about time for Kosovo to star in the internationally broadcasted Eurovision event. “It is the promotion of our country. Like we promote ourselves through football, we can also do that with the song contest,” he told Prishtina Insight. “Now, we cannot show to the world that we are capable of introducing good values through music.”

His office at the RTK headquarters in the old center of Prishtina is full of Eurovision memorabilia. Keycords, a Happy New Year card from the EBU, Eurovision press cards; it seems like Kosovo does already take part in the contest. While there is no budget for RTK employees to visit the contest, the broadcaster is involved with the EBU through training programs for journalists. 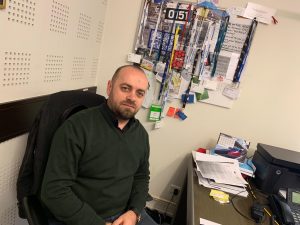 As program director, he knows how cynical some Kosovo Eurovision fans have become since RTK’s first attempts to become a full member in 2008. “In the beginning we received emails, but recently they have started to fade. People think that Eurovision is such a political event that we will never have a chance to become an EBU member. They are afraid that some members will oppose our bids every time.”

Still, there might be a chance for Eurovision fans in Kosovo. The broadcaster is paving the way to full membership by, for instance, establishing special channels for minority groups and hosting EBU events.

RTK’s efforts have led to mixed results: although the broadcaster still did not achieve its goal yet, after years of lobbying, the rules on EBU membership might change in the near future. In a meeting of the General Assembly in June, members will vote on measures that will ease the EBU admission process.

According to fan sites, under the new system, Kosovo would only need a two-thirds majority to succeed in their membership bid. Still, this would be a difficult task, since 19 of the 56 EBU member countries do not recognize Kosovo’s independence.

After inquiries by Prishtina Insight, a spokesperson for the EBU confirms that the Assembly will vote on the changes. The new conditions are not specified, but Kosovo is obliged to comply with the new rules.

“The issue of RTK’s membership is currently being considered by the EBU’s Executive Board pending a vote in June at our General Assembly on new conditions for membership of the EBU,” the spokesperson tells Prishtina Insight.

But, this might not be necessary, believes Arifaj. The Eurovision Song Contest Reference Group, who control and guide the contest, confirmed in 2017 that they are “positive about Kosovo participating in the contest” if they are invited by a country that recognizes Kosovo.

One of the favorites to win the contest and thus host it next year is The Netherlands, a country that recognized Kosovo as early as March 2008. “If they win, probably they will invite us,” Arifaj hopes.

Back in Marigona, on the evening of the second semi-final, the hope for participation still remains. “I believe we will be competing in 2020 next year,” one of the students says enthusiastically.

Another fan interrupts: “Kosovo has many talented artists. I’m sure that they will bring passion to the Eurovision stage.”

Although the road has been long, and fans have become cynical about participation, the hope never fades away.

Flora Brovina concedes “war rape photo” may not be genuine