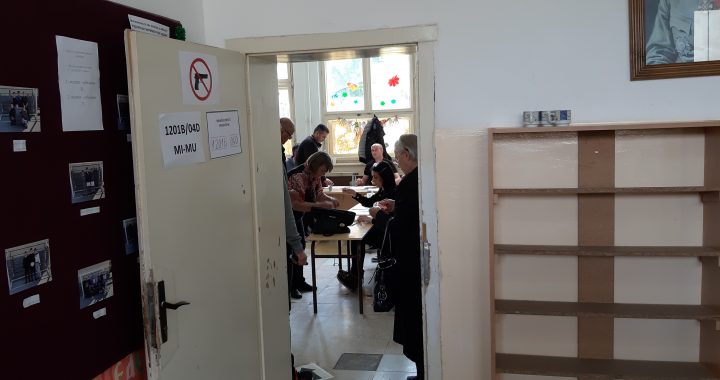 Preliminary results show that candidates from Belgrade-backed Srpska Lista, the main ethnic Serb party in Kosovo, won by a landslide in four municipalities in northern Kosovo where snap mayoral elections were held on Sunday.

Preliminary results from Sunday’s snap elections in four municipalities in northern Kosovo show that candidates from the Belgrade-backed Srpska Lista party secured an expected landslide victory, with each of them taking over 90 per cent of the votes.

Srpska Lista supporters began celebrating in Car Lazar Square in the north of the divided town of Mitrovica right after the polls closed at 7pm on Sunday, and party officials publicly called Serbian President Alexander Vucic during the celebration to inform him of their victory.

Vucic said during the public phone call that “this is the best confirmation of the policy of unity”, while the crowd chanted: “Aco [Aleksandar], Serb!”

During the call, Goran Rakic, the head of Srpska Lista, said: “We celebrate the unity of the Serbian people and our stronger ties with the home country Serbia.”

Rakic swept to victory in North Mitrovica with 90.1 per cent of the vote, Srdjan Vulovic in Zubin Potok with 94.5 per cent, Zoran Todic in Leposavic with 96.6 per cent and Vucina Jankovic in Zvecan with 94.7 per cent – all of them Srpska Lista candidates.

Almost 25,000 people voted, taking the turnout to 42.42 per cent, slightly higher than in the last municipal elections, which saw 41.9 per cent of voters cast their ballots.

The polls were called after four ethnic Serb mayors in northern Kosovo, all from Srpska Lista, resigned in November 2018 over a decision by Kosovo’s government to hike customs tariffs on Serbian products.

They have warned that they will resign again if the tariffs are not lifted.

Sunday’s election process ran smoothly, with no incidents recorded, according to the Prosecutor’s Office.

“In these snap elections, the citizens of this region proved maturity in the passing off of the electoral process, without any incident, in a democratic process, voting for the candidates that they believe will serve their interests best,” said Haradinaj.

However, independent observers from the NGO Democracy in Action reported some irregularities during the day.

“Family voting [more than one person in the voting booth] was noticed in 23 polling stations, complaints about voting lists in six cases, voting outside the booth was noticed in five cases, and an attempt to vote more than once was noticed in two cases,” the NGO said in a statement after the polls closed.

Local media also reported a number of alleged cases of people turning up to vote with Serbian documents, which was not allowed.

When asked if it was a problem for democracy that only one Serb party contested the polls, Jan Braathu, the head of the OSCE mission in Kosovo, which monitored the elections, responded: “There isn’t only one party competing, and we should not forget that the north [of Kosovo] is not a mono-ethnic area, it is multi-ethnic, and there are three political parties competing.”

“We are in favour of pluralism, of course. We would like to see as many political options as possible and for people to have choices,” Braathu told BIRN.

Sunday’s elections came at a moment of tension between Belgrade and Prishtina, with European Union-mediated talks to settle relations between the two seemingly deadlocked and Kosovo refusing to remove a 100-per cent import tariff on Serbian goods imposed last year in retaliation for Serbia’s lobbying against Kosovo’s membership of Interpol.