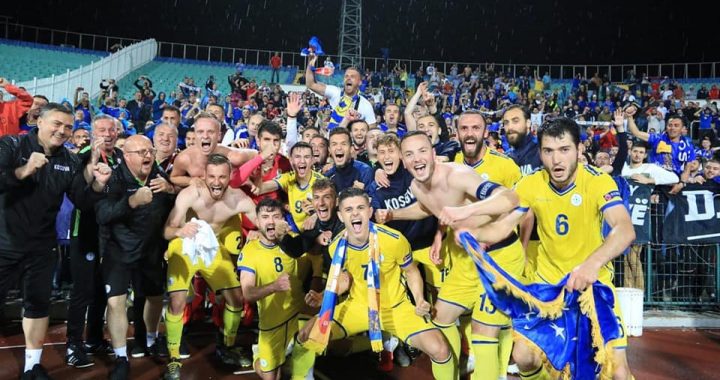 An injury time winner against Bulgaria in Sofia secured Kosovo’s first ever win in a European Championship qualifier, putting the Dardanians a point off the group leaders.

Finally, a victory. Kosovo played 12 qualifying matches for major tournaments without one before Monday’s match against Bulgaria. There were resilient draws, and even performances full of pride in defeats, but never a win.

As the clock ticked past 90 minutes on Monday night, it looked like the Dardanians would have to settle for yet another draw in a match they should have won. 2019 featured three such matches already, with Kosovo outperforming their opponents but failing to convert their chances against Denmark and Bulgaria in Prishtina and Montenegro in Podgorica.

It was the same story in Sofia for 92 minutes. Kosovo had tallied up eight shots on goal and played the final twenty minutes of the match almost entirely in the space just outside the Bulgarian penalty area, but still the score stood at 2-2.

And then it happened. Elbasan Rashani, who had already spurned two glorious opportunities to score Kosovo’s third goal of the night despite only entering the pitch after 76 minutes, met Milot Rashica’s cross, heading the ball perfectly into the far corner of the net. Bulgaria 2-3 Kosovo.

Cue pandemonium: the entire Kosovo team celebrate in a heap underneath the traveling Kosovar fans in the far corner of the stadium, with similar scenes breaking out in Prishtina and across the country. The referee’s final whistle moments later confirmed Kosovo as the victors.

Right up until Rashani’s intervention, the game had strong echoes of Friday night’s clash with Montenegro in Podgorica. Kosovo dominated that match for 70 minutes, taking the lead through Rashica before a header from Fidan Aliti was pushed onto the crossbar by Montenegrin goalkeeper Milan Mijatovic, more by luck than judgement.

A cross that was allowed to travel all the way to the back post led to Stefan Mugosa equalizing, and Kosovo had to settle for another draw in Podgorica.

Mistakes had put Kosovo in a similar position in Sofia. At the end of the first half, Vojvoda’s careless concession of possession gave Ivelin Popov space on the edge of the penalty area, which he used to full effect to draw Bulgaria level after Rashica had opened the scoring once again for Kosovo.

Kosovo started the second half aggressively, creating an early chance through Benjamin Kololli, but sloppy marking from a corner saw Kristian Dimitrov head Bulgaria into the lead.

Vedat Muriqi quickly equalized soon after before Kosovo laid siege to the Bulgarian goal. Muriqi had a second goal disallowed in a marginal offside decision, Kololli saw a header well saved, Rashica saw a long distance effort roll past the post and Rashani dragged a shot wide and directed a header too close to the goalkeeper before finally scoring the winner, securing victory.

A win against the odds

It had been unlikely circumstances for Kosovo to finally win a qualifier. They started the match missing four of their five most selected midfielders; Arber Zeneli’s injury sustained against Montenegro meant he joined an injury list already including Valon Berisha, Hekuran Kryeziu and Herolind Shala.

The list of absentees left more responsibility on the shoulders on the last midfielder standing, Milot Rashica, who responded admirably; scoring in both matches, spearheading Kosovo’s attacks throughout both games, and putting in the cross for Rashani’s dramatic late winner in Sofia.

Kosovo’s performances outside of the country have been consistently good under Head Coach Bernard Challandes, with the side playing with the same confidence to get on the ball and attacking with the same verve as they do in Prishtina. Their unbeaten run now stretches to 14 matches.

The mental qualities of the side also continue to grow, with the side showing character to fight back from behind against Bulgaria, and seemingly unfazed by playing in an empty stadium in Podgorica (due to a stadium ban after Montenegrin fans racially abused England’s Raheem Sterling) and against a backdrop of off-pitch controversy.

Just hours before kick off, news emerged that Montenegro’s Serbian Coach Ljubisa Tumbakovic, and two Red Star Belgrade players had decided to withdraw from the match in the face of pressure sustained in Serbia. When the team sheet emerged, the names of Tumbakovic and the two Red Star players, Mirko Ivanic and Filip Stojkovic were all absent. Tumbakovic was removed from his position the next day.

Controversy continued to follow the team into the match with Bulgaria, as reports that chants of “ubi ubi ubi siptari” (“kill kill kill the Albanian”) were heard during a training session for the Kosovo team emerged on Saturday. On matchday, fans of both sides mixed inside the Vasil Levski stadium’s main stand, with some ugly scenes breaking out involving both stewards and police towards the end of the match.

Regardless of the off-field distractions, the Dardanians now sit in third place in the group, a point behind Czech Republic and England, the team’s next two opponents in September’s qualifiers. Kosovo welcome the Czechs to Prishtina on September 7 before travelling to Southampton to take on the World Cup semi-finalists on September 10. Another victory in either game to go alongside last night’s will begin to really ignite Dardanian dreams.