A Turkish bath in the historic center of Prizren has remained closed to the public for decades, and citizens, architects and cultural heritage experts are pushing for the doors of this important historical site to be opened.

The Hamam of Gazi Mehmed Pasha is a must see if you happen to be in Prizren. A historic city located on the banks of the Bistrica River in southern Kosovo, to catch a glimpse of the Turkish bath would be a good reason to plan a journey to Prizren in the first place.

However, there is a chance you might not actually be able to enter the Hamam. You would be lucky to find the right people who hold the right keys, and more often than not, the Hamam – located in the very center of Prizren – keeps its doors shut.

The Hamam of Gazi Mehmed Pasha, an original Turkish bath, is located near the Kukli Mehmet Bey Mosque and the Emin Pasha Mosque. It was built from 1563 to 1574 by Gazi Mehmet Pasha, who was the Sanjak-bey of Shkodra (an Ottoman district commander) from 1573 to 1574.

On the main gated entrance to the Hamam, there is an inscription plate from 1833, the date of restoration of the building by Tahir and Mehmed Pashe Rrotulli. The Turkish bath is part of a series of buildings established by Gazi Mehmet Pasha in the historic center of Prizren, including the Bayrakli Mosque, the secondary school, the primary school, the library and the mausoleum.

As you approach the Hamam, you wander around it and see this marvelous cultural heritage, but unfortunately, you cannot enter. This includes even the garden, you cannot learn anything about the history of the Hamam if you are a random passerby. With no life inside, the Hamam, some say, has lost its spirit. 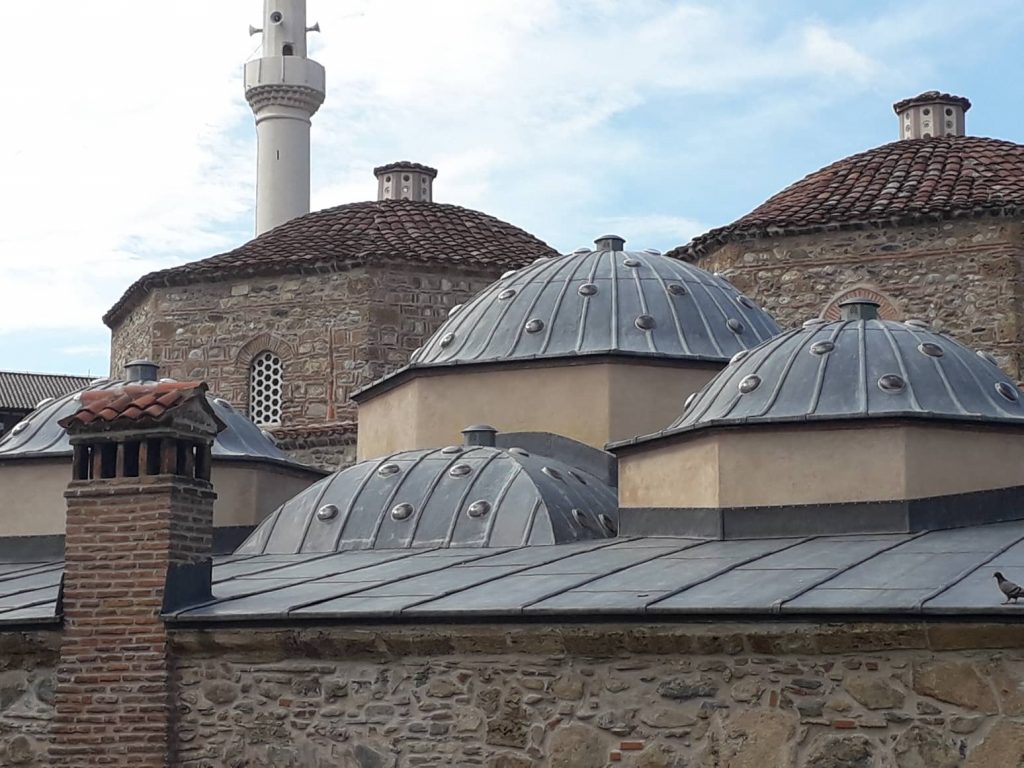 Edi Gashi has lived most of his life in Prizren, and knows every corner of the town.

“As a kid, I always dreamed of going inside the Hamam and exploring what is inside, but unfortunately at that time access was difficult and there were no events happening,” says Gashi. “Nowadays, being aware of the historical and cultural value this object embodies, I always connect the Hamam with something artistic, beautiful and fresh.”

The bath is of the ‘cifte hamam’ type, which means that it was used by both men and women at the same time, although the part of the bath for men is larger than the section for women.

The Hamam has a reception, a bar, changing rooms, and an entertainment area in the south part of the building, according to the Cultural Heritage Database of Ministry of Culture in Kosovo.

Ramadan, a man in his 70’s, walks around the building, and has mixed thoughts about this monument.

“I remember how it was back when I was a child. I come here very often, as I live just five minutes away, and even though I cannot get in, I know the garden is amazing. Things sometimes happen inside the Hamam, but I only come here to look around,” says Ramadan.

As a site of cultural heritage, the Hamam played a very important role during the time of the Ottoman Empire.

In architectural terms, the Hamam was central to the urban area of Prizren. When the Ottomans would build a city, constructing a Hamam would go hand in hand with building schools, libraries, eating areas, fountains, shops, bazaars and hospitals.

That is what Valon Shkodra explains, an independent scientific researcher at the Albanological Institute in Prishtina.

Valon says that during a visit to the baths at the Hamam, people used nallane, shoes made from wood with ornaments originating from other countries. Nallane are known to be decorated with filigree, and such decorations would show the social status of that time, especially for women.

“The Turkish bath was a crucial part of social life, but it also served a hygienic role and was connected to cleanliness – to the Islamic religion, where purity is primary,” says Shkodra. “The Hamam was open every day, under supervision, and you had to pay in order to enter inside.”

Even today, says Shkodra, we have well used phrases that are connected to the Hamam.

‘Nuk nxehet hamami me fjale po me pare’ means ‘The Hamam doesn’t get hotter with words, but with money,’ and  ‘E paske ba dhomen nxet si hamam me kon’ means ‘This room is as hot as the Hamam.’ 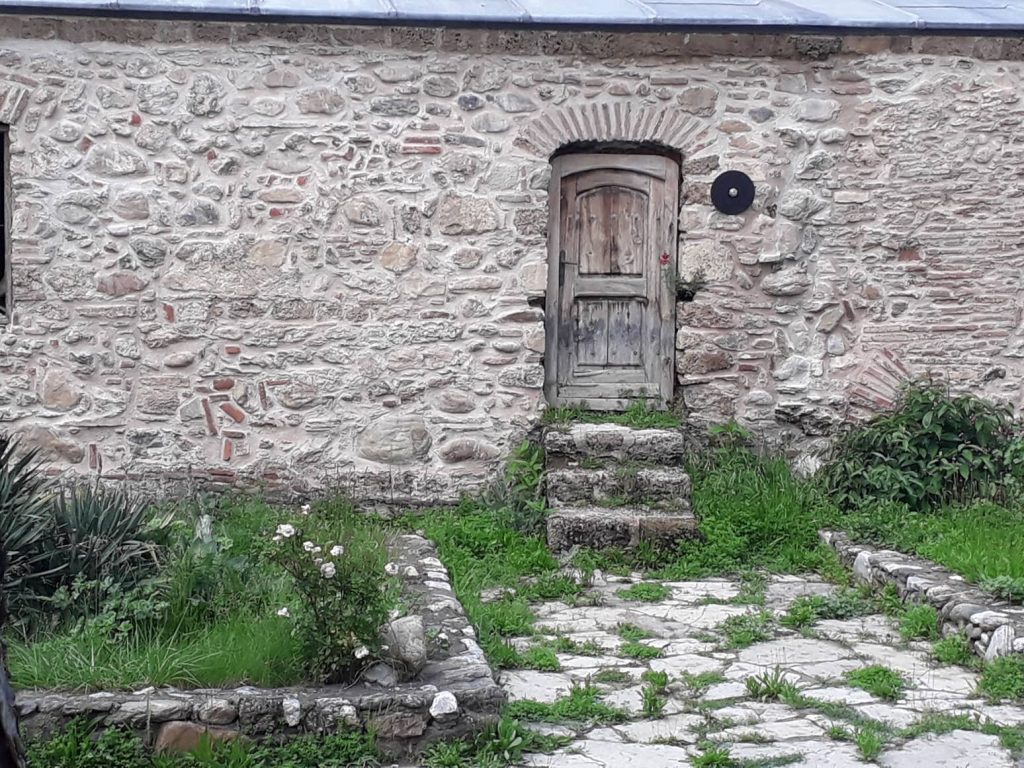 The bath was built using different kinds of stone and brick. The walls are around 90 centimeters wide, plastered on the inside. The roofing of the facility is made of two cupola, small roofs or domes built upon turrets above the reception area, along with nine smaller cupola over the hot part of the bath.

Until 1964, the bath was surrounded by shops, which were demolished at that time, before restoration and conservation works took place.

Since the beginning of the 2000’s, the Hamam has only been open to the public when cultural and artistic events happen there, and remains closed for the rest of the year.

There are many, however, that do not agree with this way of running the Hamam.

Florina Jerliu, a professor of architecture at the University of Prishtina, emphasizes that all the existing Hamams in Kosovo, of which there are six, are no longer used for their primary purpose, and another use for them has not been found.

“Young and middle-aged generations today in Kosovo have no idea about the Hamam, what happened there and how everything functioned, all we know is who built it and when,” says Jerliu. “We should not forget that these Hamams are important places in our collective memory while we are trying to rebuild a narrative that was changed on many occasions, particularly  during communism.”

“If you lock an object away you are not protecting it, and the Hamam of Prizren is the best example of this. The Hamam was living heritage, and it shouldn’t be dead like it is now,” Jerliu continued.

“If events happening there inside are becoming more and more rare, people will have no reason to go there. People go to Turkey to visit Hamams, even though it could be possible for them to do it here.” 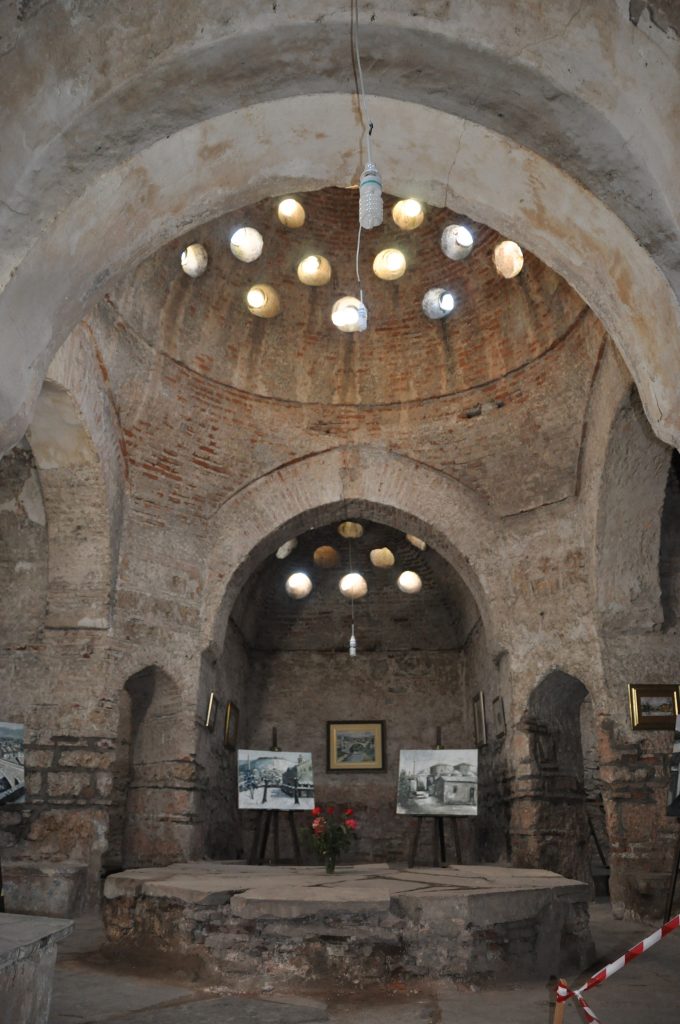 Nora Arapi, a conservation architect at the Regional Centre for Cultural Heritage in Prizren, recalls a story she knows about the Hamam. She describes a conversation between Gazi Mehmed Pasha and a worker during the construction of his mosque. Mehmet Pasha refused to allow the construction of the mosque to be carried out by workers that were unclean. To rectify this, Arapi says, he ordered that the Hamam be built first, so that his workers would wash themselves before they built the mosque.

“Being located in the very center of the city, the Hamam is a reference point for tourists coming to Prizren. It is a part of the mosaic of cultural heritage monuments in the city, and makes Prizren more desirable and diversified for tourists,” says Nora.

Throughout the years, the Hamam was brought to life through different events.

Dokufest, the famous documentary film festival in Prizren, has managed to open the Hamam on different occasions for events taking place there each summer. In 2018, Arbnor Morina, an artist from Prizren, opened his personal exhibition inside the Hamam, attracting visitors from Germany, Ukraine, Ireland, Serbia and Bosnia. HAVEIT, an artistic collective from Kosovo, performed inside the Hamam in August 2017 as part of their participation in the first edition of the Austrada Biennale.

There are so many reasons for this Hamam to open itself up to the public, and Shkodra believes that it can become as iconic a landmark as it was during the times of the Ottoman Empire.

“This Hamam was very famous back then, altogether with the Hamam of Skopje and Sarajevo,” Shkodra adds. 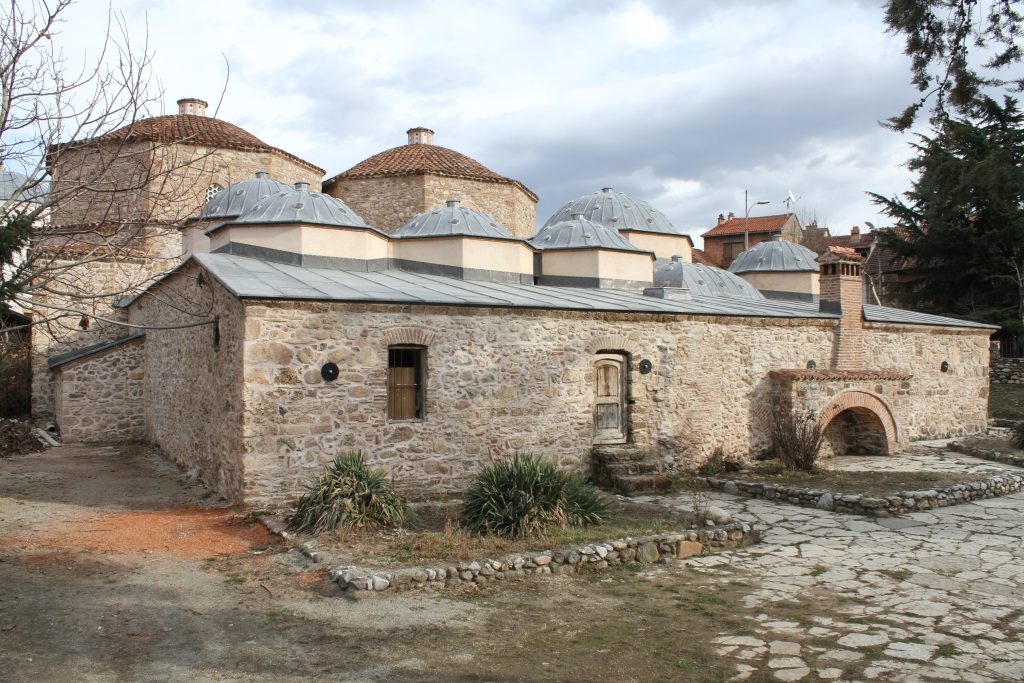 Veron Tara, an architect dealing with the restoration of cultural heritage monuments and a member of the Cultural Heritage Council of the Historic Center of Prizren and above all, says that it is for the benefit of everyone that the Hamam is open and accessible.

Tara walks around the Hamam on a Saturday afternoon, without being allowed to enter.

“The Hamam is not yet a museum. If this was the case, it would require administration, toilets, offices, exhibition spaces. You need to people to be here every day in case tourists come, or just interested people,” explains Tara. “You see the Hamam everywhere in brochures and publications regarding the city, and it is ridiculous to come here and find it closed. It is like going to the Eiffel Tower and then finding out that it is not working.”

However, Tara has some ideas for the site. This building could be turned into a library, a museum, a bookstore, an institute, into a place that functions, as has happened with many places like this around the world. You could even add in a small place to drink coffee in the yard, he says. 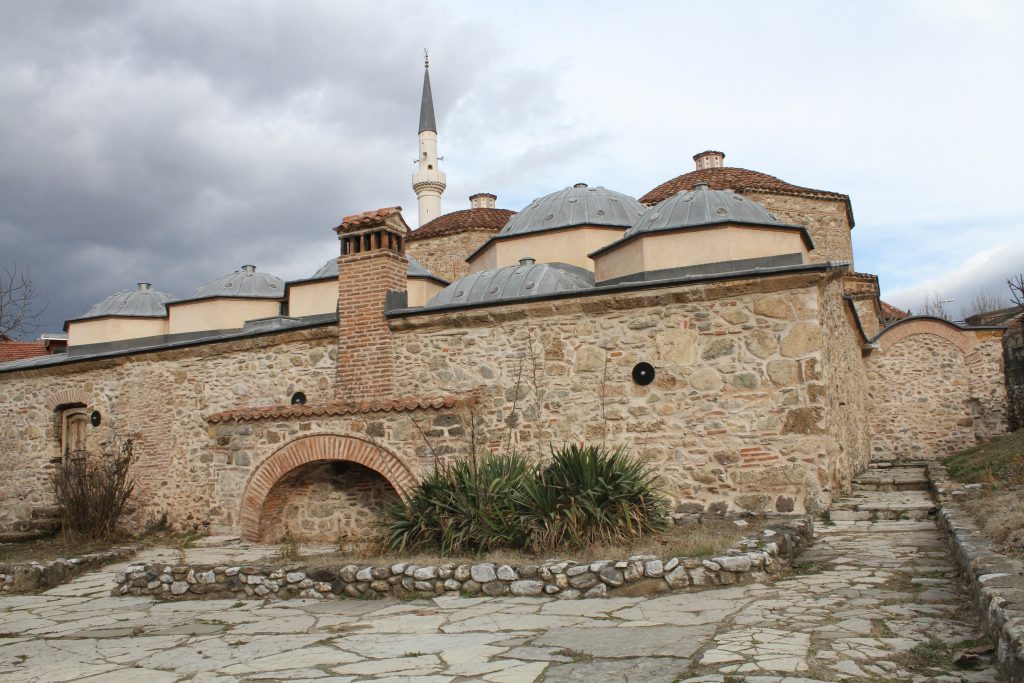 Not surprisingly, a lot of drama is involved in the whole process of restoration works for the Hamam of Gazi Mehmed Pasha.

The restoration project for the Hamam was drafted by a team from the Regional Center of Cultural Heritage in Prizren in 2011, with the participation of international experts in the field of typology of public buildings at the time of the Ottoman Empire.

Initially, UNESCO helped with the restoration on the cupolas and roof, where some cupolas were in a bad condition and had to be renovated. The cupolas were plastered from the outside for protection. Afterwards, restoration work on the exterior walls and the placement of windows in the cupolas was financed by the Ministry of Culture and completed in 2018.

“Currently the Hamam is in good condition, and the risk of atmospheric damage has been removed. The walls, cupola and the roof are stable and have been renovated. In order to complete the work, it is necessary to restore parts of the interior and the yard of the building. With the funds from the Ministry of Culture, finally the Hamam will be completely functional,” says Arapi.

Unfortunately, there is a possibility that the Hamam could reach a grisly end, says Tara.

“If you destroy the Hamam, people will feel bad because it is a reference point. People still meet in front of Hamam. Mosques and churches are everywhere, but Hamams are very rare because they were built in cities in transition whose location was very central, and Prizren was one of a kind. To my understanding, if you destroy the Hamam you bring to an end an entire culture,” says Tara.

On the other hand, just this month the Ministry of Youth, Sports and Culture of Kosovo signed 10 memorandums with the Municipality of Prizren for around 3.7 million euros. However, among the cultural projects listed to be supported by this funding, there is no sign of the Hamam.

Until something is done about the Hamam of Prizren, we must continue to cherish it from the outside, and cling to the memory of the vital role that Hamams played across Kosovo.