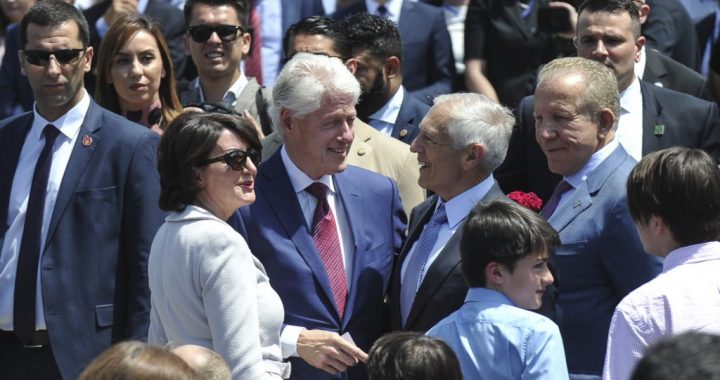 Former US President Bill Clinton addressed crowds of Kosovo citizens in the center of Prishtina on Wednesday, marking 20 years since the liberation of Kosovo by NATO forces in June 1999.

Amid cheers from the crowd in Prishtina and chants of “U.S.A., U.S.A,” former US President Bill Clinton gave a speech in front of the Kosovo Government building in Skenderbeg Square, marking the 20th anniversary of NATO’s intervention in Kosovo.

During his speech, Clinton spoke of a victory for democracy and values in Kosovo, noting that “even the smallest of nations” can win provided justice is behind them.

Clinton was awarded the Order of Freedom by Kosovo President Hashim Thaci upon his arrival on Tuesday, the highest honor that Kosovo can decorate an individual with.

Also visiting Kosovo to commemorate the day NATO troops entering Kosovo is General Wesley Clark and the former Secretary of State Madeleine Albright, who introduced President Clinton to the crowd. Albright said that she was proud of what they were able to achieve in Kosovo together.

“None of the events we commemorate today would have been possible without your leadership,” said Albright. “We prevailed because our alliance was unified and strong. Most importantly, we succeeded because our cause was right, and because of the people of Kosovo.”

President Hashim Thaci also addressed the crowd, offering his “sincere thanks” to Clinton for his and NATO’s assistance in 1999.

“What NATO did was a great and extraordinary step, a decisive step to save an entire nation so that evil would falter, to create a future for us and for our future generations,” said Thaci.

Clinton recalled his visit to Kosovo following the end of the war.

“It is one of the greatest honors of my life to have stood with you against ethnic cleansing and for freedom,” said Clinton. “I remember the faces of the people I met when I came here 20 years ago to the elementary school in Ferizaj. 79 days of airstrikes by NATO may have won this war, but only the people who were there that day, and the citizens of Kosovo, could have won this peace.”

“20 years later, I think you have done a fine job of winning that peace,” he continued.

Clinton spoke of the future, urging Kosovo not to take its democracy for granted, and to continue working towards Euroatlantic integration and further economic development.

“Every single day, we choose to live in hope of a brighter future, or stay in the shackles of out regrets and resentments,” he said. “Never forget, as we think about the challenges before us, you already have something astonishing. You have given a whole generation their first 20 years of life in peace.”

Following the speech, Clinton will take a walk from Swiss Diamond Hotel to the unveiling of a bust of Secretary Albright at the American School of Kosovo. Clinton will also walk down the main boulevard in Prishtina that was named after him to visit his own statue, which was inaugurated in 2009.