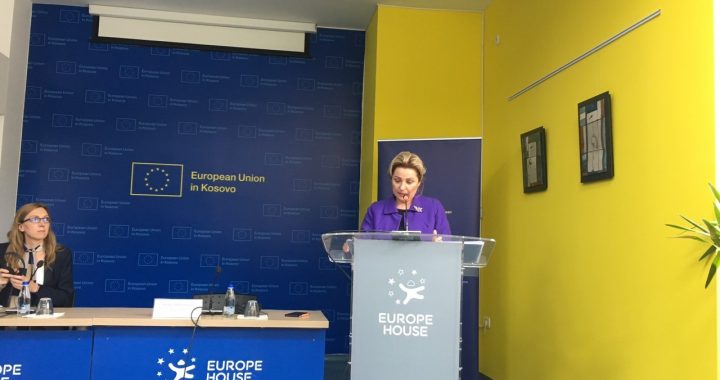 The EU published its annual report on Kosovo on Wednesday, hailing improvements in the country's rule of law reform, but condemning several policies enacted by the Kosovo Government as undermining Kosovo’s progress in relation to the EU.

The EU’s 2019 Kosovo Progress Report, published on Wednesday, praised the Kosovo Government’s commitment to the implementation of EU standards and reforms, but criticized its track record in recruitment of public officials, its tariff increase on goods from Serbia and Bosnia and Herzegovina and lack of improvements in the development of Kosovo’s judiciary.

The report, which focuses on the implementation of EU-related reforms and standards as part of their enlargement policy in the Western Balkans, concluded that irregularities in public administration, Kosovo’s relation with Serbia and the situation in the north remain challenges to Kosovo’s overall development and accession path.

“Kosovo needs to make further substantial efforts to establish a conducive environment to the conclusion of a legally binding agreement with Serbia,” the report reads. “Such an agreement is urgent and crucial so that Kosovo and Serbia can advance on their respective European paths.”

Few details on the progress of Kosovo’s visa liberalization bid were provided, but according to the report, a final decision on this proposal is in progress.

“The proposal is pending in the Council and should be treated as a matter of urgency,” the report reads.

In July 2018, the European Commission declared that the two remaining benchmarks set by the EU before Kosovo’s visa liberalization path could progress were fulfilled, concerning the fight against organized crime and corruption.

In March this year, the European Parliament endorsed the Commission’s proposal to continue negotiations towards visa liberalization.

“These efforts should continue and the Commission will continue actively to monitor the further development of the track record,” it added. Kosovo’s visa liberalization dialogue with the EU began in 2012.

The report praised general improvements in Kosovo’s legal framework in the areas of rule of law and public administration related to priorities of the European Reform Agenda. However, the Commission highlighted that these improvements were hindered by the high polarization of domestic politics in Kosovo.

The EU report paid particular attention to the import tariff imposed on Serbia and Bosnia and Herzegovina in November 2018, hailing this as one of the most visible declines in neighborly relations in the region. The report said that Kosovo “must” revoke the tariff, and attributed Kosovo’s failure to improve regional cooperation to “weaknesses in overall functioning” of Kosovo’s governing bodies.

The report condemned the employment of ministers who have been indicted for offences involving corruption and abuse of office, as well as those holding criminal convictions, stating that this is bad for the Kosovo Government’s image.

“The appointment as government adviser and then nomination as ambassador of a convicted war criminal was widely criticized,” the report said.

Syleman Selimi, who was released on January 25 this year after serving five years in prison for crimes committed against the Kosovo Serb population during the Kosovo war, was appointed in February as a political adviser to Prime Minister Ramush Haradinaj.

The report also condemned the “excessive” employment of deputy ministers that lack any clear purpose, stating that it undermines the effectiveness, credibility and coherence of the government.

Any of the government’s achievements in the last 12 months were “overshadowed” by the imposition of 100 per cent tariffs on Bosnia and Herzegovina and Serbia, said the report.

“This economically counterproductive measure violates the Central European Free Trade Agreement, CEFTA, and is not in the spirit of the SAA [Stabilization and Association Agreement]. It has undermined successful regional cooperation efforts, notably the creation of a regional economic area, and must be revoked.”

The report noted robust economic growth and improvements in Kosovo’s development of a functioning market economy, but raised concerns about the continued proliferation of an “informal” economy, attributing the slow advancement towards diversifying the economy to “spending pressures relating to social benefits for specific groups of the population and public employees’ wages.”

While giving praise for the adoption of several pieces of legislation to tackle corruption and improve the functioning of the judicial system, the report said that the judiciary remains at an early stage of development. The Commission singled out the lack of full functionality of Kosovo’s Court of Appeals as an example of how financial and human resources across Kosovo’s courts remain inadequate.

“The judiciary is still vulnerable to undue political influence,” the report said. “The administration of justice remains slow and inefficient and rule of law institutions need sustained efforts to build up their capacities.”

The Commission recommended improving laws on the disciplinary liability of judges to increase judicial accountability, and implementing alternative forms of dispute resolution to ease the backlog of pending cases in the court system.

Click here to read the Commission’s full report, or here for the summary of the key findings.