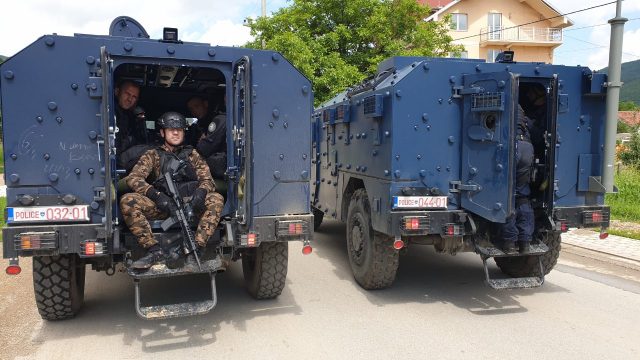 Large scale police raids in northern Kosovo on Tuesday resulted in the ‘successful’ arrest of numerous Kosovo Police officials for smuggling and organized crime, sparking declarations of military readiness from Serbia to protect Serbs in Kosovo.

The Chief of Kosovo Police, Rashit Qalaj, said that the large scale raids across municipalities in northern Kosovo and some southern municipalities as part of an investigation into smuggling and organized crime was “successful” and went “according to plan” in a press conference on Tuesday afternoon.

“The operation started at 06:00 on Tuesday morning, and in most of the municipalities where we have suspects, be they police officials or citizens, the operation went smoothly without any problem,” said Qalaj.

The Basic Court of Prishtina authorized a request to raid the premises of suspected individuals in Zubin Potok, North Mitrovica, Leposavic, Vushtrri and Drenas.

“In today’s operation, 12 premises were raided and 19 Kosovo Police employees were arrested,” said Kelmendi. “From them, 11 are Kosovo Serbs and four are Kosovo Albanians, as well as four Bosniaks. Among them is one commander of a [police] station and the others are officials in the Kosovo Police.”

“Different illegal items have been confiscated which will serve as evidence, including guns, money and various technological equipment,” she continued.

According to Kelmendi, all police officers being investigated in relation to the operation have been suspended.

Kosovo Police, who entered the northern municipalities in armored vehicles, encountered barricades and attacks upon entering the Municipality of Zubin Potok. Gunshots were fired as police entered the municipality, with one police officer incurring minor injuries.

According to Qalaj, the same bullet that injured the officer then hit another police officer, causing only minor abrasions because of the decreased speed of the bullet.

“We eliminated all of the barricades on the streets, of which there were many, and managed to get past and into Zubin Potok to raid all locations according to plan,” said Qalaj.

“We can say that the entire operation was successful and well coordinated between institutions,” said Qalaj. “I consider that, despite the active resistance from some citizens in Zubin Potok, the action was successful because we had no fatalities.”

Qalaj confirmed that Mikhail Krasnoshchenkov, a Russian national working for the United Nations Mission in Kosovo, UNMIK, was arrested during the operation.

The Ministry of Foreign Affairs of Russia and UNMIK both issued demands for him to be freed, and he was released from detention shortly afterwards.

The Russian Foreign Ministry called the operation in northern Kosovo “another provocation” by Kosovo Police.

Kosovo Police also raided houses in Vushtrri and Drenas on Tuesday as part of the investigation into contraband smuggling allegations, making numerous arrests.

In response to the raids, Serbian President Aleksander Vucic said during a Serbian parliamentary session on Tuesday morning that all Serbian police units, as well as the army, were combat ready to protect Serbs in Kosovo.

“We are more than aware of the terrible consequences, and because of that we will continue to work on keeping the peace,” he said. “But when you see that that becomes impossible and that someone wants to expel your people – I have said before that we will not allow for another Storm [operation].”

Vucic said that Kosovo Police are attempting to scare Serbs in Kosovo, and that Serbian forces are ready to “protect people in the shortest possible time.”

Prime Minister Ramush Haradinaj condemned Serbia’s reaction to the Kosovo Police operation on Twitter, saying “Organized crime and smuggling are a direct threat to our mutual progress, and should NOT be supported on an ethnic nor any other basis. The Government of Serbia should not undermine our efforts to tackle it.”

Kosovo President Hashim Thaci called for all citizens to have the utmost confidence and support for Kosovo institutions in the ending organized crime and corruption.

“Today’s police operation is for the benefit of all citizens without any distinction, and I invite the Serb community in the north to maintain peace and support the fight against organized crime,” said Thaci on Tuesday. “In the second decade of the Republic of Kosovo, there will be no room for organized crime and those who deal in illegal activity will end up behind the grilles.”

The NATO military presence in Kosovo, KFOR, confirmed that the raids were a police operation only, and that no Kosovo Security Force or other military body was deployed as part of the operation.

“Because of the political sensitivity of the moment, Commander KFOR invites all the parties to deal with the disputes peacefully and responsibly, without any use of force or violence,” said KFOR in a press release on Tuesday afternoon. “People should stay calm, they have nothing to fear.”

EU spokesperson Maja Kocijancic called for “utmost restraint” during the police operations, and implored for institutions to ensure that any action would not weaken normalization efforts between Kosovo and Serbia.

“The police operation in Mitrovica targeting individual suspects from across the whole region and the rest of Kosovo, following court orders, should be conducted in accordance with law and properly communicated,” said Kocijancic.