Nora Visoka-Weller, who worked as translator for foreign media & diplomatic observing mission during the Kosovo war, shares her memories of the late ‘90s in an exclusive interview with BIRN.

In late October 1997, a crew of foreign journalists stationed in Prishtina told their 18-year-old translator Nora Visoka-Weller a persistent rumour that had been circulating – that soldiers from the Kosovo Liberation Army, KLA, had been sighted in the Drenica region.

A few days later, Visoka-Weller headed out to the village of Llausha in Drenica in an attempt to meet the guerilla army. She remembers that when she arrived in Llausha, three men with guns stopped the car and asked for their IDs.

“For me it was a weird feeling,” she tells BIRN. “I thought: ‘This is my army! I shouldn’t be afraid of them.’ So when they requested IDs, I asked: ‘Should I also give my ID? I’m Albanian.’ One of them shouted: ‘Yes! Yes! You too! Give me your ID!”

The foreign journalists did not manage to talk to the KLA on this occasion. However, it was enough simply to confirm the existence of a guerrilla army whose formation up until that time had only been spoken of in whispers.

“For the journalists, this was the goal – to see that there were soldiers,” Visoka-Weller says. A month later on November 28, 1997, Visoka-Weller would return to Llausha, this time during a landmark moment for the Kosovo war. She attended the funeral of Halit Geci, a teacher at the elementary school in Llausha, who was killed by Serbian forces.

The funeral was attended by three uniformed members of the KLA carrying the insignia of the guerilla army. It was the first public appearance made by the KLA, and their first public pledge to liberate Kosovo from Serbian rule.

“This was no ordinary funeral – it was a public protest,” Visoka-Weller says. “I had the feeling that everyone who attended the funeral was ready to join the KLA. The anger was in the air.”

She adds that the situation in Kosovo changed after this first public appearance by the KLA. “The presence of Serbian Police and military increased in Drenica, with checkpoints being installed,” Visoka-Weller recalls.

In the following months, tensions increased across Kosovo, while sporadic fighting broke out between the KLA and Serbian state apparatus. On March 5, 1998, the Yugoslav military undertook an operation in Prekaz which killed Adem Jashari, one of the founders of the KLA, as well as 58 members of his family – the majority of whom were women and children.

The next day, early in the morning, Visoka-Weller visited Prekaz along with her colleagues from the international media. “I entered one of the Jashari’s houses and everything was burnt and destroyed,” she recalls.

Days later, Visoka-Weller managed to meet with some of the children and women from the village, who had managed to find refuge in Mitrovica. “They were in a shock and they could not stop the tears,” she tells BIRN “All of them were in one room, all crying at the same time. It is one of the most difficult moments I’ve experienced.”

Visoka-Weller’s visits to the Drenica region were even more frequent by the spring of 1998, as she had begun working with the American Information Office. She regularly witnessed the suffering of the people in the region, reporting it to the US Department.

In mid-September 1998, she visited Drenica as fighting between Serbian forces and the KLA was intensifying. Entering the village of Likoc, she and her fellow observers saw that the KLA base had been captured by Serbian paramilitaries.

Visoka-Weller describes a scene of chaos in Likoc: corpses on the ground and half-naked paramilitaries still sitting in position on the corners of the stone walls surrounding the houses in the village. Many of the paramilitaries looked like they had taken heavy drugs, with needles littering the ground.

“It was not like anything I had seen before,” she says. “It was out of control.”

The team were stopped by the paramilitaries, but were eventually allowed to continue.

“While we were discussing what we had seen, everything suddenly stopped,” Visoka-Weller says. “A mine was activated and we were thrown into the air.” 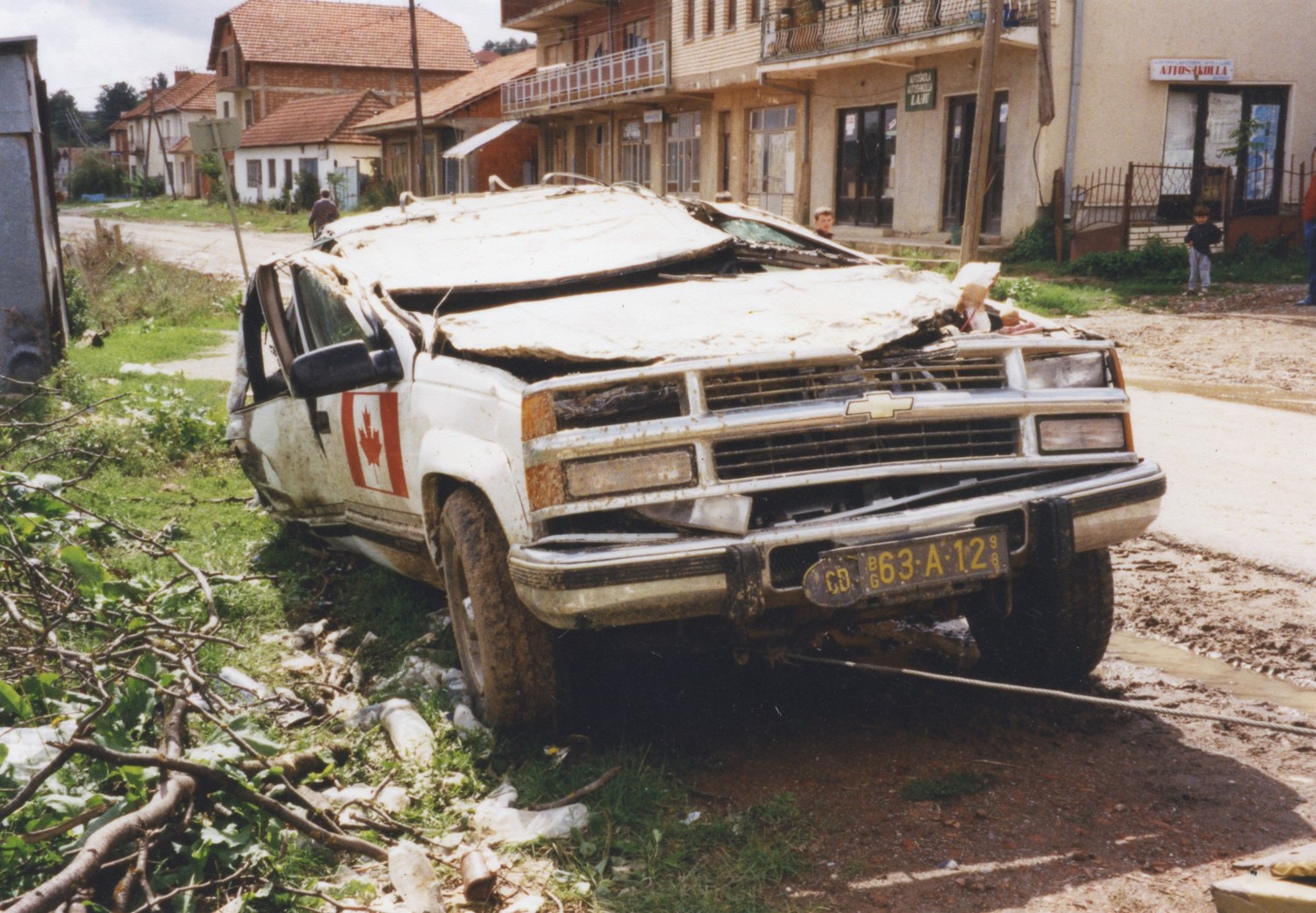 The Diplomatic Corps car following the detonation of the mine in the village of Likoc in 1997. Photo courtesy: Nora Weller.

“The car turned upside down like a crushed can,” Visoka-Weller continues. “I was covered in blood but felt no pain. Soon I understood that the blood was from my [Canadian] colleague John.”

To make things worse, Visoka-Weller says that the paramilitaries began shooting in the direction of the car. KLA forces were stationed a few hundred metres ahead, and the crew found themselves caught in between the two belligerents. After five hours and with the diplomatic intervention of the US, the withdrawal of the observing team from the battlefield was negotiated.

Following the incident, Visoka-Weller had to stay for two months in a hospital in Skopje, and would not return to the field until the end of the war. “It became clear that I could not go in the field,” she says. “At the beginning my memory was weak, I could not remember many people and many things,” she recalls.

‘Suffering of civilians is not at the centre of our memory’

The traumatic events that she experienced as an 18-year-old translator have followed Visoka-Weller throughout her career. After the war she continued her studies in cultural heritage at Cambridge University, specialising in commemoration of war zones and atrocities of war.

Her experiences have naturally shaped Visoka-Weller’s own memories of the Kosovo war. However she believes that the suffering of civilians has failed to be centred in the collective memory, largely due to the way the war is portrayed.

“When I visit the Jashari compound, the feeling that there was a massacre against civilians is missing,” she says.

The academic believes that the dominant story of the war is that of the fight between the Yugoslav army and the KLA, and that the suffering of victims have not been sufficiently told.

“The way it is portrayed is as a heroic war of the KLA against the Serbs,” she tells BIRN. “No. This was an attack of an army against civilians who were exterminated. That is the reality.”

For her, the untold story of the suffering of civilians has only helped Serbia deny responsibility for the crimes committed in Kosovo. “Silence is a victory for every genocide,” she says.