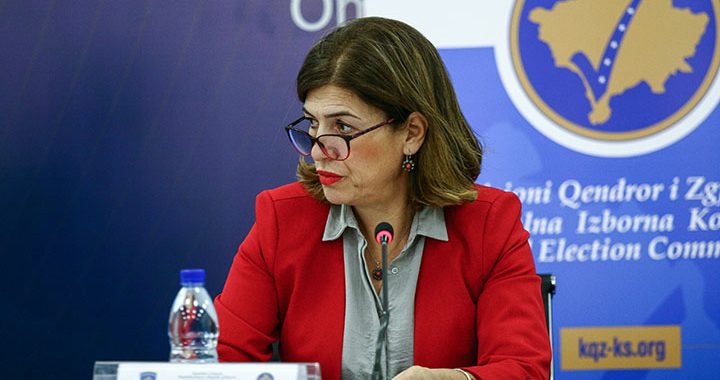 The head of the Central Election Commision, Valdete Daka, has been dismissed by Kosovo President Vjosa Osmani for ‘failing to ensure impartiality’, sparking criticism from civil society organisations.

Valdete Daka, who  served as head of Kosovo’s Central Election Commission since 2010, has been dismissed from her position by Kosovo President Vjosa Osmani. She has been replaced by Kreshnik Radoniqi, a judge at the Court of Appeals.

In the presidential decision removing Daka from her post, which has been obtained by BIRN, it is stated that Daka was being dismissed due to her failure to act with the impartiality required to ensure free and fair elections in Kosovo.

“Through her actions, the head of CEC has violated the independence and integrity of CEC, particularly during the early elections on February 14,” reads the reasoning section of the decision, which was signed by President Osmani.

The reasoning lists a number of “irregularities” at the institution relating to the parliamentary elections in February, particularly citing difficulties that members of Kosovo diaspora faced in casting their vote.

A verification process for postal voters was installed by the CEC before February’s elections, which triggered complaints among members of Kosovo diaspora for suppressing their right to vote. The reasoning for Daka’s dismissal highlights this issue, claiming that “it is visible that a discriminatory strategy against a group of voters was applied.”

Daka is also accused of behaving like a representative from a political party, and failing to control meetings at the Central Election Commission. “On some occasions, the behaviour of the chairperson was similar to that of representatives of political parties and, as a consequence, through her actions and inaction, has contributed to situations escalating during [CEC] meetings,” the reasoning states.

Daka served as head of the Central Election Commission for over a decade, overseeing the organisation of four parliamentary elections and numerous local elections, the majority of which were praised by independent observers from the European Union.

A coalition of more than 10 NGOs including the Kosovo Democratic Institute and Democracy for Development have jointly condemned the sacking of Daka, questioning the motivations behind the dismissal. “This decision is politically motivated as a result of a change of power after the last elections,” reads the communique.

In January, Daka organised a press conference in which she decried public intimidation against her following the Kosovo Judicial Council’s decision to remove 47 candidates from the ballot in February’s elections, including Vetevendosje leader and current prime minister Albin Kurti.

The coalition NGOs also warn of the potential consequences that the decision might produce, particularly in light of the fact that municipal elections are scheduled to be held this autumn.

“Taking this decision on the verge of announcing the date of local elections constitutes direct influence in the independence, and integrity of the work of CEC in organising and administering the elections,” the statement reads.