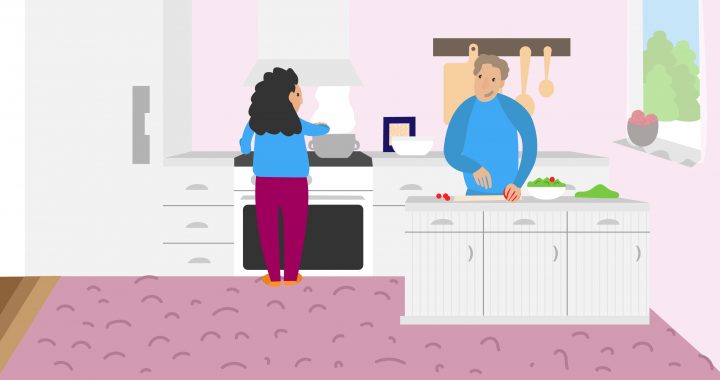 For some, the kitchen is a place for family, friendship and food. For others, it can be a site of subordination.

Weeks ago, local feminist NGO Artpolis organized an activity called “feminist cooking and other” as part of their project “Young women for peace in Kosovo and Serbia.” The two events gathered young women and activists from both countries, first in Belgrade then in Prishtina, to cook, dance and enjoy each other’s company while sharing their experiences with feminist developments in the two countries.

From the photographs, all the viewers could see were women eating and hanging out together over a buffet style table with finger food. The post sparked a reaction among activists, who mocked the activity, considering it ridiculous and ‘unfeminist’.

This raised the question for some as to whether it is unfeminist for a feminist to cook.

While it should be obvious there is nothing inferior in cooking per se, it should be just as obvious, especially to a feminist NGO, that the traditional image of women in the kitchen cooking and cleaning can symbolize women’s systemic subordination and their exclusion from political and public life.

When cooking and performing other tasks that history defined as ‘a woman’s job’ is translated into an activity aiming to send a message, this must be put into perspective. The topic of eating and cooking is worthy to focus on, and I regard these domestic activities as deeply feminist.

The kitchen is the most gendered room in patriarchal households. It is historically associated with women and we have been taught that it is the place where women belong. A room women owned and where they got to be their very best by fulfilling their duty of feeding the family, getting creative with recipes, and showing ‘womanly decency’ by cleaning up nicely after.

Conversely, as a general practice and regardless of families’ economic status, it is at the kitchen table where men jump first and eat as much as they want. It is the space where they feel no shame to ask for more and where they get to give feedback in regards to what they’ve eaten; too salty, not salty enough, too dry or too oily, you name it.

If one cares enough to hear life stories from our great-grandmothers, grandmothers, even our mothers, we learn that throughout history, food was something women made and served, but they almost always ate last and thus had less to eat. Settling for crumbs was not a voluntary choice for women, but it somehow became unavoidable due to labor division between men and women, with men being the breadwinners and women the homemakers.

The duty to feed and satiate big families like ours two to three times a day remains a woman’s job. But satisfying men’s tummies is a particular duty we are charged with from a very early age. And such an expectation, if not challenged, follows us into adulthood, no matter our age or achievements.

There have been countless times when I witnessed men taking food from the plates of wives, girlfriends, or sisters with the patronizing joke: “you don’t need all this, you will get fat.” Or times when the women have voluntarily put some of their food on men’s plates in the belief that men need to eat more than women considering our physical differences.

Thus, to change the gender discourse on food, rule number one is for women to eat well and as much as they want. Emphasizing this very basic human need is essential to the larger debate on our political and economic rights. “One cannot think well, love well, sleep well, if one has not dined well,” said 20th century author Virginia Woolf in her famous feminist essay: “A room of one’s own” in 1929. It is worthy advice to keep in mind as we continue living with sexism and do our best in fighting it.

Another reason to satisfy our own stomachs and nourish our own senses is to ignore the expectations of the capitalist market that demand thinness in women and dictates how to only keep fat in certain body parts so as to please the male gaze. Unless we’re talking about how to nurture ourselves and keep our bodies healthy and strong, let us embrace the classic feminist motto “Riots, not diets”.

Men in the kitchen is not an unfamiliar image. We are used to seeing men as chefs in restaurants or serving food in different settings. Generally speaking, when men cook, it is a job they get paid for, and along with payment they enjoy prestige and appreciation. When women cook, it is their obligation, an ‘unpaid contribution’ as the Kosovo’s law on gender equality defines it. Therefore, getting men in the kitchen at home is a real game changer and it should be among our first priorities towards equal partnership at home and beyond.

In addition, when men get to be in charge of cooking, doing the dishes and hanging out in the kitchen, it becomes a familiar and healthy image for boys and girls to look up to. While girls will later demand such qualities in men they socialize themselves with, boys will be taught to be independent and responsible. Ones that see girls as their equals, don’t find it conflicting to wash the dishes, and are able to take care of themselves and others in an a non-macho, nurturing sense.

No wonder that cooking is part of teaching curriculums in Nordic and other developed countries. The outcome reflects their core values as societies at large, with state policies that promote equality at home, school, and other institutions.

When you live in Kosovo and you talk about involving men and boys in the kitchen as active participants, the response is gloomy. “We will hardly get there,” is what I constantly hear. Such pessimism is legitimate considering the prevailing issue of domestic violence in Kosovo with women and children as the chief victims. Thus, telling women to do as they please could sound to many as irresponsible. Cooking is not always a consensual task, but an obligation they have no choice but to carry out on time.

But there are many young men and women who have a voice aiming to ‘make a change’. So many young women who operate in a safe and enabling space are able to let go of old-fashioned traditions and inspire a powerful image as a mother, a wife, a sister. Someone who, if they are the only one in charge of cooking, will primarily cook for herself and have others adjust to her taste buds and food choices. And if others have certain preferences, they might as well take care of it themselves.

Remember we are trying to make women’s lives easier, and that means letting go of what we’ve been taught, that we can bear it all; cook, clean, take care of everyone, go to work, and smile while doing everything.

The kitchen does not have to be an inferior room for either women or men. It can be a place where men and women can get social together, a place we associate with nourishment and play. But more importantly, we can turn the kitchen into a place where radical change is possible, where men lose their privileges, and children are taught life lessons.