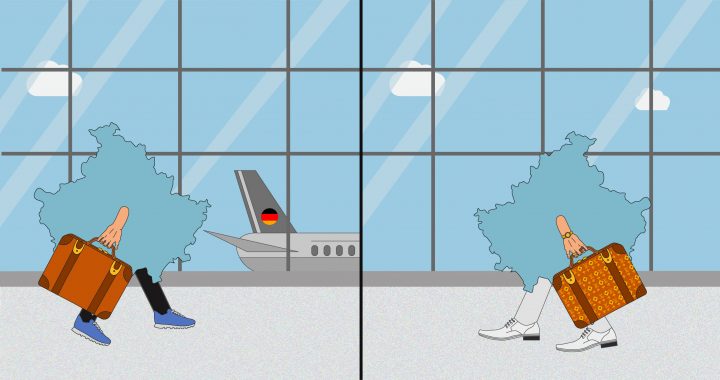 ‘Shaci’ as another product of Albanian orientalism

Through the lens of Albanian orientalism, the discourse surrounding the word ‘shaci’ is an import of the stereotypical representation of Albanians in Germany, Austria and Switzerland to Kosovo, and a method of self-humiliation.

Albanians, amongst other ‘foreigners,’ represent the ‘other’ in Austria, Switzerland and Germany. The dynamics of othering gives ‘foreigners’ two basic options. The first option is to play the role of the ‘other’ in the entertainment industry, like the football player Xherdan Shaqiri, the rapper Azet or the boxer Luan Krasniqi. Only a handful of ‘foreigners,’ in these cases Albanians, can achieve this ‘breakthrough’.

Having this in mind, statements like “shacis wear white jeans, drive expensive BMWs, and listen to trashy tallava music” are not the only way of creating the ‘other’ within Kosovo, as Dafina Paca put it in her 2015 article ‘Schatzi’: Making Meaning of Diaspora. First and foremost, the shaci image is an uncriticized import of the European ‘other’ by the European ‘other’ itself.

In this sense, shaci is a racist and absurd construction. It is racist in content because it reproduces the notion of the Albanian ‘other’ existing in these German-speaking countries. The absurdity lies in the fact that it is kept alive by Albanians in Kosovo, i.e. the European ‘other’ itself.

In numbers, around 740,000 Albanians live in the German-speaking countries. If all these people were to hold Kosovo passports, they would represent 40 per cent of the country’s population. Kosovo’s economy heavily relies on the remittances of the diaspora. According to official data, Kosovo’s diaspora brings more than 500 million Euros each year back home. However, it is believed that the number is doubled due to unregistered amounts of money entering the country. To put it shortly, Kosovo’s diaspora is economically crucial at home.

Copying and pasting Western orientalist discourse since the 1830s

The shaci image is not the first import of European discourse by the Albanian elite that fails to engage in a critical examination of its underlying racist framework. Inspired by Edward Said’s fundamental 1978 book Orientalism, Enis Sulstarova’s 2006 book Arratisje nga Lindja: Orientalizmi shqiptar nga Naimi te Kadareja (Escaping from the Orient: Albanian orientalism from Naim [Frashëri] to Kadare) addresses the constant attempt to copy and paste Western ways of thinking into Albanian elitist circles.

The major outcome of this text, drawing from empirical evidence from the beginning of the awakening of Albanian national consciousness in the 1840s up to today, is as follows: the formation of modern Albanian identities depends on mutually exclusive oppositions like Europe vs. Asia, modernity vs. backwardness, West vs. East and Christianity vs. Islam. In this sense, shaci is another outcome of Albanian orientalism.

In Germany, Austria and Switzerland, Albanians historically are portrayed in an orientalist manner. Karl May’s 1892 novel Durch das Land der Skipetaren (Travelling through Albanian lands) is one of the most well-known German works of adventure fiction. In this novel, the Albanian protagonists are represented as brutal, devious and untrustworthy thieves, who threaten the European traveller. Of course, the author included the notorious orientalist theme of the Albanian blood feud in his novel.

Albanians who arrived to work in German-speaking countries during the ‘Gastarbeiter’ period in the 1960s and 70s and the war refugees during the 90s only reinforced the belief that the Albanian is ‘non-European’ in nature. The 2011 documentary Die guten Albaner (The good Albanians), produced by the Swiss public broadcaster service SRF (Schweizer Radio und Fernsehen), is a good snapshot in time of the general feeling of the German-speaking countries toward Albanian migrants. The documentary portrays four successful Albanians in Switzerland, who are represented as an exception to the movie’s main assumption that “they [Albanians in Switzerland] are considered as speeders, dealers, and brawlers.”

Illustrating this point further, a 2018 study regarding ethnic hierarchies in job applicant selection in Germany, conducted by the Berlin Social Science Center, found that applicants with Albanian roots are the most marginalized in the German labor market.

Observing the discourse Westerners have developed of Albanians, the self-proclaimed ‘progressive’ Albanian elites imported this concept to Kosovo and promoted it under the buzzword shaci. At the same time, this elite urban population failed to take heed of their own position within the discourse they appropriated. In his polemical 2016 article Schatz mirësevjen!  (Welcome Schatz!), Rrahman Pacarizi illustrates this point (maybe involuntarily), highlighting the “cultural superiority of Kosovo’s urban population.”

Pacarizi expresses the binary between the ‘European’ Albanian living in Kosovo vs. the ‘oriental’ Albanian in Germany as follows: “Shacis, like we [Albanians living in Kosovo] have a certain jealousy regarding your economic well-being, you have a certain jealousy regarding our progress.” The irony here is that the Albanian elites assume that they are excluded from the orientalist discourse on Albanians, as promoted in the West.

Examples of how this binary opposition between the ‘European’ Albanian living in Kosovo vs. the ‘oriental’ Albanian living in the West is enacted by the Kosovo state are numerous, and almost always through different means of financial exploitation: the absence of a proper welfare state system can be attributed to Kosovo’s ‘outsourcing’ of the welfare state function, which objectifies Albanians living in the West to the status of a living wallet and is the root cause of millions of undocumented euros coming into the country to sustain the population.

Numerous bureaucratic obstacles exist for Albanians who move back to Kosovo, also stifled by the lack of governmental initiative to trigger a brain gain by making it more attractive for Albanians to move back.

By keeping alive a Western orientalist discourse directed against Albanian migrants and Albanians in general, the Albanian elites are humiliating their people and themselves. The import of this discourse, which has no emancipatory value for society, has one result: the complicity of Kosovar elites in sustaining the current misery of their people by pushing forward the old principle of rule and divide, stabilizing this rule by driving a wedge between diaspora Albanians and homeland Albanians.

This article is part of a series of op-eds published on Prishtina Insight as part of a project called Leveraging Diaspora for Policy Development from NGO Germin. This article was produced with the support of the Democratic Society Promotion, DSP,  a project financed by the Swiss Agency for Development and Cooperation, SDC, and the Danish Foreign Ministry, DANIDA, and managed by the Kosovo Civil Society Foundation, KCSF. The content of this article does not necessarily reflect the views of donors and implementers.


Adem Ferizaj was born in Kosovo, but grew up in Germany. After finishing his A-Levels, he went to France to study at Sciences Po in Paris, where he completed his trilingual (German, French and English) bachelor’s in political sciences and sociology and a bilingual (French and English) master’s in international relations. During his studies, he developed a special interest for postcolonial studies. He has also worked in different NGOs in Germany, Finland and the Czech Republic, written for different newspapers (Prager Zeitung, der Standard, openDemocracy etc.), taught German in Kosovo, and is currently employed at one of the biggest German television broadcasting services. You can follow Adem Ferizaj on Twitter.