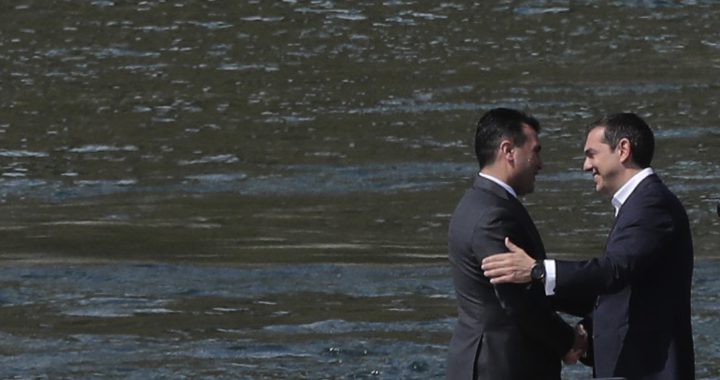 Greek Prime Minister Alexis Tsipras, right welcomes his Macedonian counterpart Zoran Zaev, in the village of Psarades, Prespes, Greece, before the signing of an agreement on Macedonia's new name on Sunday, June 17, 2018. The preliminary deal launches a long process that will last several months. If successful, it will end a decades-long dispute between neighbors Greece and Macedonia _ which will be renamed North Macedonia. (AP Photo/Yorgos Karahalis)

One down, but many other Balkan disputes left to go

The agreement on the Macedonia name dispute shows that political will can produce breakthroughs even in the Balkans, but will the same happen with the Kosovo-Serbia conflict?

Historic disputes lead to historic agreements. Cheers were heard across the region, Twitter was flooded with messages from high profile politicians congratulating Greece and Macedonia for reaching the agreement on the long standing name dispute. Greece has agreed to recognize its neighbor as the Republic of North Macedonia – announcing the good news that the Balkans has waited many years for.

Yet the name dispute, unfortunately, represents only one of too many open bilateral disputes in the Balkans. Name, territory and border disputes, minority issues, laments about lost ‘heartlands’ still plague the region. Throughout history, Balkan countries have put immense amounts of energy into creatively blocking each other from any potential progress. After all, it is more convenient for ‘strong leaders’ to drag their feet, using  ‘neighborly disputes’ as a political shield for their shameless corrupt behavior, all the while their criminal networks cooperate effectively.

It took almost three decades,or half of the life of an average Macedonian (citizen of FYROM or Macedonian/citizen of North Macedonia or whatever name that is convenient for the bureaucrats), to solve the name dispute, which became a centerpiece of the region’s politics since 1991 when Macedonia gained independence. Resentment grew even further when VMRO-DPMNE came to power. Under the governance of Nikola Gruevski, Macedonia went through a total re-branding, turning Skopje into an amusement park while fueling nationalism and hatred not only with the surrounding countries, but also internally. At the end of the day, it was all about power and corruption, the hidden agenda was not to prove that Macedonia was the ‘cradle of civilization’, but to build a cradle of corruption and greed.

When I learned that the historic agreement was reached between Macedonian PM Zoran Zaev and Greek Alexis Tsipras, I could not help but wonder where Macedonia would be if this issue was not solved. Would it lead anywhere else but the total isolation of the country and state capture? The event reminded me that Macedonia signed its Stabilization Association Agreement five days before Croatia did, which will be celebrating their fifth anniversary within the EU next month. Meanwhile, Macedonia is still struggling to recuperate from the damages of the rotten political leadership of the past decade.

The agreement has veered both parties onto the right path, yet there is a lot still to be done during this summer to prepare for the referendum in Macedonia, and an endorsement vote by the Greek parliament for the deal to be fully effective. Ensuring broader support in both countries will be a great challenge, potentially facing aggressive nationalist backlash. But both parties have reached a point where there is no turning back. Regardless, the agreement may open a new window of opportunity to the Euro-Atlantic path for Macedonia. As regulated in the Article 2 of the Agreement, Greece will not object to the membership application of Macedonia in international multilateral organizations. This agreement came just at the right moment, as the next meeting of the European Council will take place on June 28-29, thus increasing the chance that Macedonia will be given the endorsement to open accession negotiations with the EU marking the end of a long lasting blockade by Greece.

On the other hand, NATO might invite Macedonia to begin the accession process during the next summit in Brussels to be held on July 11-12, as the NATO Secretary General Jens Stoltenberg was one of the first to congratulate both prime ministers confirming the positive implications of the agreement in paving Macedonia’s path to NATO membership. This will mark a major turning point, an entire decade after the Bucharest summit where Greece blocked Macedonia’s membership proposal.

The first lesson to be drawn from the Greek-Macedonian agreement is that political willingness should be coming from the region itself, and that solutions imposed by the international community for the sake of their geopolitical interests will not by any means bring peace to the region. Another valuable lesson to be taken into account by the international bureaucrats is that negotiating with nationalist stabilocrats will lead to a dead end, or potentially another conflict – a ‘normal’ cycle ensuring survival for a political veteran in the region shuffling from one post to another to remain in power. Moreover, Macedonia can be used as a model to show the citizens of the region that the power lies in their hands, and that there are new emerging political elites that could lead  Balkan countries in a new, different and better way.

In lieu of the Greece and Macedonia case, the pressure to solve the Kosovo-Serbia dispute will be increased drastically. Although, during the Sofia Summit this issue  was hardly mentioned, or put into the spotlight. With the lack of media coverage of Serbian President Aleksandar Vucic and Kosovo President Hashim Thaci managing to bother the two attention-seekers extremely. Totally overshadowed by Tsipras and Zaev, Vucic had to stage a boring question about Kosovo from one of the government-controlled media, in order to go on a tangent about postponing the agreement and haggle for more benefits by simply declaring that he is not ready for it. Thaci, on the other hand, confirmed his dedication to enter the final round of talks without a strategy, or domestic political consensus.

Following the case of Greece and Macedonia, one of the key steps for a successful negotiation process between Kosovo and Serbia or any other dispute in the region, is change in the political elite – even though it might seem very unlikely to happen. Negotiating constructively without aggressive political discourse against each other fueling nationalist movements is the key to a successful process. While the Greek and Macedonian negotiations took place only on a prime ministerial level, there was no pressure or feeling of lack of transparency, as both parties constantly confirmed their dedication to the process aiming to create the widest possible consensus, thus increasing the level of trust toward the process in general. Macedonia and Greece should be used as a lesson not only for the countries in the region, but also for the EU and other international actors claiming to be the factor of stability and peace. The key lesson is that there are very slim chances to end a dispute while constantly triggering fear for conflict and destruction.