A letter from Argentina

Our columnist sends us a letter from a far off corner of Argentina, a country of natural wonders, excellent wine, tumultuous history, and a destination for retired war criminals from World War II to Yugoslavia’s breakup in the 1990s.

I woke up after midnight slightly disoriented in a room bathed in silvery moonlight. It took me a few seconds to realize that I was in a hostel in El Chalten, a tiny village tucked in a corner of the Patagonian steppes in Argentina’s Los Glaciers National Park. I dressed up quickly and walked outside where temperatures had plummeted to below freezing. I got into the car and drove through the desert for about an hour and then pulled over on the shoulder of the road, stopped the engine, and walked outside. There was no wind, but the first thing I was forced to reckon with was the frigid cold air. Then I noticed the silence. Deafening and mysterious silence, punctuated by the ineffability of the experience, the indistinct shapes of shrubs and distant hillocks, and a flashing awareness of the vastness and emptiness of the desert.

I started walking but after the frozen gravel under my shoes made that disturbing crunchy noise, I resorted to stand still for a few moments looking up at the moon and the stars imagining how this night-haunted ancient desert was once home to the biggest dinosaurs roaming freely in a world that would not see humans for another 65 million years. And perhaps, I thought, this is how muted the world will be like, on a distant future night, when humans along with their political and moral systems, their rotted ideologies, religions, their armies, wars, borders, cities, corporations, kings, tyrants, and pathologies of every kind will grind to a halt; and the most destructive, most violent,most vindictive species the planet has ever known will finally cease to exist, granting mother earth another chance to return once more to that primordial silence.

Then I remembered it was my  birthday and feeling somewhat adrift my thoughts flew back from The End of Times to my own mother, two continents and several time-zones away. With a sinking sad feeling settling in the pit of my stomach, I thought about her advanced age, her declining health, the depressing regimen of medicine and painkillers she’s subjected to everyday, the arthritis racking her bones and disturbing her sleep at blackest hours of night, flooding her brain with memories and worries about her scattered children around countries and continents. She’s always been a worrier, and even today she constantly fretts about the most trivial details of my day. It seems like it is a mother’s destiny to never get a break, never retire from motherhood. 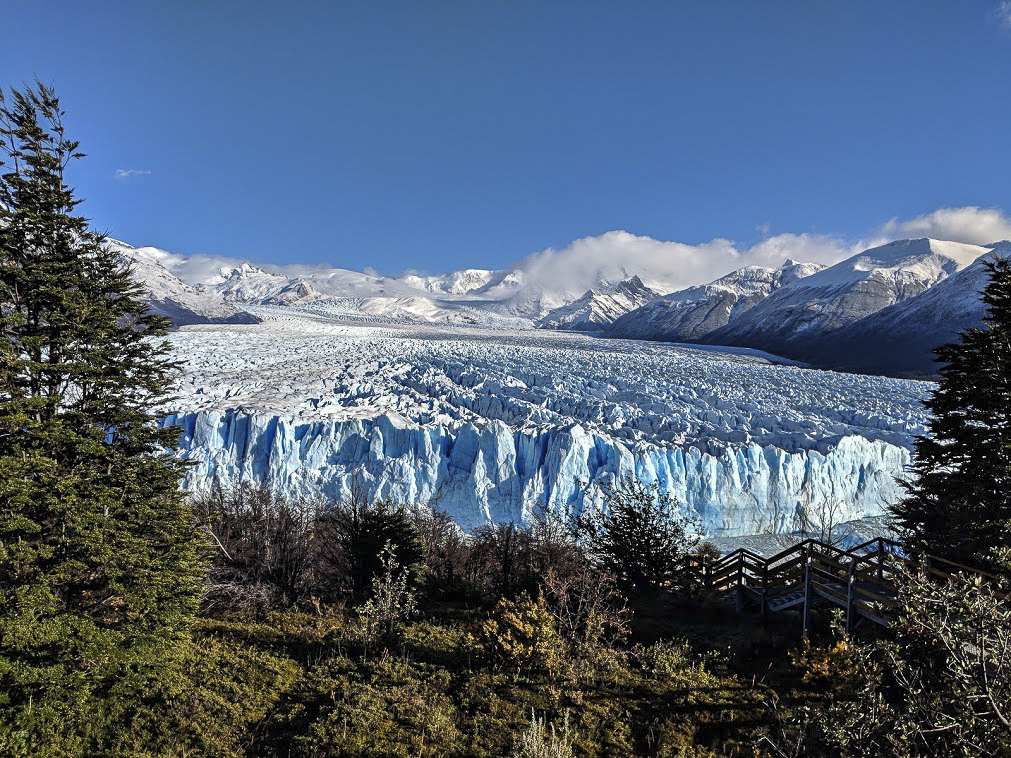 For a long time Patagonia loomed large in my imagination ever since I read the travelogues of writers and explorers ranging from Charles Darwin to Bruce Chatwin, who were awed by the region’s strangeness and its outlandish tales and myths. Before the Europeans showed up here, archaeological records show that human presence in Patagonia goes back to at least 12,000 years ago, roughly at the end of the last Ice Age. One famous relic of this early habitation is Cueva de Las Manos (‘the cave of hands’) site, which shows hundreds of handprints painted on the cave walls. As it happens, cave art is now believed to have been more consequential to the evolution of modern humans than previously thought. Some anthropologists suggest that cave art, which first appeared in Europe more than 30,000 years ago, coincides with the rise of homo sapiens as dominant species, which consequently led to the demise of the Neanderthals who supposedly lacked human-like neurological structures to form symbols and communicate through them. Though indecipherable, the images at Cueva de Las Manos are evidence of the earliest organizational codes and communication in the Patagonia region, which those early inhabitants shared with other animals like guanaco—a shy, elegant, and lama-like creature—that today is the most iconic resident of the Patagonian steppes and pampas.

Closer to our times, Argentina, like much of South America, was a Spanish colony before it broke away in the early 19th century and then plunged headlong into decades of chaos and civil war. In the 1880s, however, the country entered a period of unprecedented economic growth and prosperity, which attracted the largest wave of immigration the country had seen until then. Fleeing war, poverty and filthy and violent cities of Europe, immigrants landed in Argentina by hundreds and thousands, prompting a sharp political debate about the nation’s character.

After World War II, the country became a magnet for another group of immigrants: war criminals—Nazis, Fascists, Ustase, you name it. Even Adolf Eichmann, Hitler’s main architect of Holocaust, was smuggled into Argentina during the 1950s with the direct help and sponsoring of the Catholic Church and Juan Peron’s government. In the Balkans too, Croatia, led by the Ustase, had become a Nazi puppet state, and joined the conspiracy to ship war criminals to Argentina after Germany’s defeat in 1945. Ante Pavelic, the notorious Ustase founder, landed in Argentina in the late fall of 1948 under the name of Pablo Aranjos. So widespread was the operation of relocating these monsters to Argentina that it led to wild speculations that even Hitler himself had escaped there and lived peacefully with some of his henchmen somewhere in Patagonia.

Though it was particularly Peron’s government that sheltered the most notorious Nazi collaborators, Argentina’s reputation as a sanctuary and a promised land inspired many of the war criminals of the 1990s emerging from the rubble of Yugoslavia. Some of the most well-known who spent time in Argentina include Ante Gotovina who was first indicted by ICTY for war crimes during the Croatia-Serbia war, then acquitted on appeal, and Milan Lukic, a notorious Bosnian Serb who ordered killing of civilians, including women and children in Visegrad during the Bosnian war. He was arrested in Buenos Aires in 2005. That same year in Mendoza, Argentina, a region famous for its Malbec wine, the police arrested a Kosovo-born man by the name of Nebojsa Minic who had lived in the country for some years under the false name of Vlada Radivojevic. Some readers will recall that Minic was a ruthless war criminal and a commander of the so-called “Jackals,” a paramilitary unit during the Kosovo war operating under the cloak of Serbian army in and around Peja, Minic’s hometown.

During the spring of 1999, Minic, also known as “Mrtvi” (The Dead) led the Jackals into four villages near Peja and killed more than 100 Kosovo Albanian civilians. “Total horror,” it’s how Zoran Raskovic, one of the killers and a key witness in a Belgrade special court, described the massacre in the village of Lubenic. In “The Unidentified,” a chilling BIRN documentary about the massacres, Raskovic described how he felt after the killing on the morning of April 1: “When they were all dead and quiet, I looked up at the minaret and I thought, ‘God, what a beautiful day.’ It was truly a nice, sunny day. And I could not bring myself to look down.”

Nebojsa Minic died from AIDS and cancer in a hospital in Mendoza while waiting for extradition. The other members of the unit were indicted in a special court in Belgrade with 106 years in prison, but  the decision was later overturned by an appeals court. On the other end, successive Argentine governments have investigated and arrested people like Minic and Lukic, but the scale and numbers of war criminals retiring to Argentina and elsewhere in South America remains unknown. It may take many years of painstaking investigative work to find and arrest lesser known criminals who participated directly in the bloodbath of the Balkan wars in the 1990s, but may be living in freedom today in cities across Argentina and beyond.

by Eve-anne Travers
Next: Opinion

One down, but many other Balkan disputes left to go