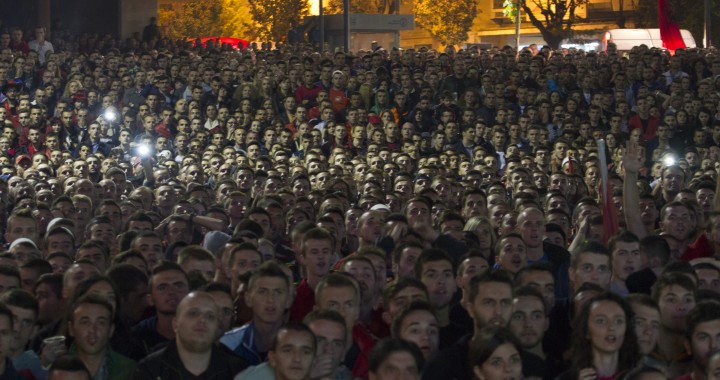 Thousands of Kosovo Albanians follow on a giant screen in Pristina, Kosovo, the Euro 2016 Group I qualifying match between Serbia and Albania, being played at the Partizan stadium in Belgrade, Serbia, Tuesday, Oct. 14, 2014. (AP Photo/Visar Kryeziu)

Our destructive obsession with Serbia

One day in October of 2011, I was sitting across the table from a Rwandan government official in an office building overlooking Kigali, the capital of Rwanda. After talking business for a while—I was there as part of a World Bank Mission in East Africa—our subject turned to the relationship between Tutsi and Hutu in the country. “The tension is always brewing underneath, and it has been there all along,” the official said, describing relations between the two groups since the 1994 genocide, when as much as 20 per cent of the country’s population were slaughtered by Hutu militias. My colleague, a Tutsi, described how one recent small incident between the two groups had exploded into a dangerous physical brawl. “It led to an outburst of hate unseen for many years. I believe we are in denial, and sooner or later we will still slide back into widespread violence,” he said.

I found myself thinking about that conversation as I watched the reaction of Serbian and Albanian crowds to the brawl unfolding in Belgrade’s Partizan football stadium on the night that Albania and Serbia played against each other in the European championship qualifiers. In the aftermath, as emotions ran high, thousands of people took to the internet and media with messages of hate, violence and calls to arms.

The mechanics of the incident involved a seemingly mad crowd of Serbian hooligans, with convicted criminals in the midst, throwing objects in the field, chanting “Death to Albanians” and other offensive language throughout the 42-minute match. The Albanian players were under relentless abuse and pressure the minute they stepped into the stadium. Then came the unnecessary provocation by Albanians or whoever flew the “greater Albania” banner over the stadium. The people who orchestrated the stunt probably never stopped to think that their reckless act would endanger the lives of the Albanian players who were in a precarious position inside the stadium. There is nothing amusing about that act unless one lacks the foresight to see through an insane situation with potentially deadly consequences.

But the incident itself— outrageous and tragic as it might have turned out to be—is just a symptom of a much larger ailment between Serbs and Albanians. This is why it’s important to look beneath the surface and see the larger forces at play.

Many Albanians judged the incident another example of Serbia’s poisonous nationalism, a reminder of the dark days of the 1990s. As a Kosovar Albanian, it is tempting for me to agree with their version of the truth or any truth that blames Serbs for anything that goes wrong under the Balkans skies. After all, I am all too familiar with the history of Serbian repression and violence. For almost 100 years, Serbia has been a constant threatening and destructive force to my family. Serbs killed my great-grandfather during the First World War in 1916. The Serbs also killed my grandfather, too, during the Second World War, in 1945. My father was harassed by Serbian security forces throughout his life. My house was burned to the ground by Serbs dressed in police uniform in 1999. They then beat my father, leaving him lying unconscious in the street. Then they turned on me. I was taken to be shot in front of my parents but escaped in a moment of great confusion and chaos.

For me, talking about Serbs quickly becomes personal. I am aware that this history looms large in my life and can imagine the same or worse for many other Kosovar Albanians. Denying the depth of this emotional history and its reach into the present is equivalent to denying it ever happened. But I’ve also wondered over the years what this history should mean for me, my family and the future generation. What am I to do with all this information? Should I channel this emotional baggage into a perpetual state of hatred against present and future Serbs regardless of their actual role in that history? If I do that, how is that going to help me move on in life? Do I want to carry all this rage inside me? Is there a point to all of it?

This conundrum easily extends to all Kosovar Albanians who live under the shadow of this history. Most importantly, can the young and bright of Kosovo do something to weaken the deadly grasp of that history into our own present and more importantly into the future? A traumatic past can never be erased, but it can be archived, so that it frees the society to form an outlook in life through present and continuing experiences. It is a psychological and social struggle, but one that is sure to open the mind to a healing process and to form judgement without always searching for a reference point in a painful past.

Unfortunately we Kosovar Albanians have been ready to blame Serbia for anything that has gone wrong in the region. We fault Serbia for a catalogue of failures from when the sons of Kosovo become jihadi fighters to the fact that people in Kosovo prefer Serbian-made products over domestic ones. Why do we believe that every negative event is orchestrated by Serbia? Why, even when faced with failures of our making, do we reach deep in the past to assign the blame for this to Serbia?

Why is this victimhood mentality so persistent, so unyielding, so in charge of our societal outlook in life? Doesn’t this state of psychological insecurity bother us at all? What dignity is in a living, which continues to subject itself to a perpetual state of inferiority? Where is that independent mind that we boast so much about? Why are we so obsessed with Serbia? Why do remarks from an obscure Serbian politician take so much space in our TV talk shows and, more importantly, why are Serbs still in our heads as we go about our daily routine–even when no events are related to them?

Time has come to take a deep look at ourselves and ask existential questions about who we are, what we have become, and where we are headed. In other words, we need to engage in some serious soul-searching and deal with our own societal flaws and let the relation with Serbia take a natural course. The less we scratch those wounds the more chance we give them to heal, and with time they just might feel better.

In the meantime, we should unshackle ourselves from this sorry state of mind and deal with the mountain of our own failures: broken schools, uneducated youth, terrible health care system, a horrific economy, corrupt public service, the deepest poverty in Europe, most isolated country in the continent, and the religious radicalization of our youth whom we now export across borders not as immigrants, but as terrorists. I believe that the ultimate answer for us is to turn inward and focus on our own fledgling state. We have our space now and no one is closing our schools or harassing us in the streets. Let’s stop harassing ourselves and let the Serbs figure out their own problems and fight their own demons. Neither party can afford to slide back.

Mikra Krasniqi, a native of Kosovo, is a senior economist with the Government of Maryland’s Department of Economic and Business Development in Baltimore. His opinions are solely his own and not reflect those of his employer.