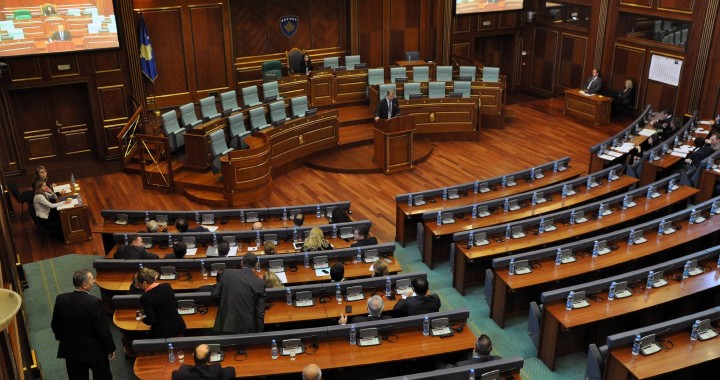 Ombudsperson’s case against judges’ reappointments might take Constitutional Court out of commission and even lead to president’s impeachment - but experts doubt either will happen.

The Constitutional Court has remained silent on a case questioning the legal legitimacy of the three international judges who serve it, or President Atifete Jahjaga’s decree confirming their appointment by the EU Rule of Law Mission, EULEX, which has been challenged as unconstitutional.

If the court hears the case, filed by Ombudsman Sami Kurteshi on Oct. 9, it could render itself completely dysfunctional until there is a new parliament. It could also result in the impeachment of Kosovo’s president, which is why analysts are skeptical that the court will hear the case at all.

“This is a case with potentially serious consequences,” says analyst Fisnik Korenica, director of the Group for Legal and Political Studies. “If the court finds a serious violation of the constitution, it could be grounds for the dismissal of the president, and would be automatically referred to the parliament.”

On Sept. 1, Kosovo President Atifete Jahjaga issued a decree “confirming the continuation of the mandate” of the three judges, American Robert Carolan, Bulgarian Snezhana Botusharova-Doicheva and Portuguese Almiro Rodrigues. The three were originally appointed by the International Civilian Office, a now-defunct body which transitioned Kosovo from UN Administration to Independence.

An internal EULEX memo obtained by Prishtina Insight revealed that the President’s office wanted the three judges to be nominated by parliament and to swear an oath upon appointment, as required by the constitution, but the EU convinced the president’s advisers that this was not necessary.

Any decision that found that the president violated the constitution in decreeing the continuation of the mandates, however, would also destabilize the court because the three judges would have to be at least temporarily removed, taking away the seven person quorum needed to make any decisions. There are currently only eight judges on the court (one of the nine seats is vacant), one of whom must recuse himself from hearing any political cases.

“No constitutional court in the world would follow a line [of logic] that would put itself out,” Korenica said.

That’s why the court may decide that the case is inadmissible.

“We need not to forget that the Constitutional Court is a highly politicized institution, which is not there to interpret the Constitutional justly, but to serve as a political scale to maintain balance and the so called political stability,” said political analyst Shpend Kursani. “I do not believe … that the Court will act upon fairly on the Ombudsperson’s case. It’s just too democratic for the Court to swallow this case.”

The European Union and the president’s office say the “continuation” is in line with an April exchange of letters between President Jahjaga and EU foreign policy chief Catherine Ashton which was ratified by the Kosovo Assembly.

Ombudsman Kurteshi argues that articles 65, 84 and 114 of the Constitution mandates that all appointees to the Constitutional Court be nominated by the Assembly and then appointed by the President, and that according to his interpretation – in line with the President’s own initial interpretation prior to her discussions with EULEX – that requirement was not altered by the exchange of letters with EU foreign policy chief Catherine Ashton.

In his filing, the Ombudsman requested “Interim measures,” or an immediate decision by the court to suspend the three international judges. According to the court rules, such requests are supposed to be expedited and given priority over all other matters, but the court has yet to respond.

Even if the three international judges have to recuse themselves due to a likely conflict of interest–as any decision would deal directly with their jobs–that does not stop them from weighing in on a decision on interim measures.

The Constitutional Court told Prishtina Insight it had no comment about the deadline for deciding on interim measures codified in its rules of procedure.

As President Jahjaga encourages the political parties to break out of four months of deadlock and stalemate, she now has a challenge to her own legitimacy hanging over her head. The court has 30 days from the day it receives all the paperwork from the Ombudsman to decide whether or not the case is admissible, and the president 45 days to issue a response to the challenge.

“They have her in their hands,” Korenica said.