In his book Our Man: Richard Holbrooke and the End of American Century, American novelist and journalist George Packer sheds light on the life of the US diplomat who left deep footprints in Kosovo’s recent history and the Balkans.

“I am writing to inform you that I am ready to meet President Slobodan Milosevic, without any preconditions, under the mediation of the United States. I urge you to appoint Mr. Richard Holbrooke as a mediator.”

When Kosovo’s former president Ibrahim Rugova wrote this letter in March 1998 to then-US Secretary of State Madeleine Albright, he was aware of the outstanding role that Richard Holbrooke had played in the Balkans, particularly his part in the Dayton Agreement that brought an end to the war in Bosnia and Herzegovina in 1995.

Nonetheless, Rugova was not aware that he was asking Secretary Albright to engage one of the Clinton administration’s biggest political opponents. Albright hated the idea that Holbrooke would deal with the issue of Kosovo. Despite being a successful and long-serving military man and diplomat since the Vietnam War, because of his temper, Holbrooke was hated by almost all of his colleagues in the US Foreign Service. Holbrooke also disregarded Albright, considering her incompetent. The dream post for Holbrooke, that of Secretary of State, had been denied him by Albright, who was selected in that position on the recommendation of  the former First Lady Hillary Clinton.

As Rugova requested in his letter of March 1998, Holbrooke was named President Clinton’s special envoy to resolve the crisis in Kosovo. In June 1998, when the war was in full swing, he met with representatives of the Kosovo Liberation Army, KLA. He was among the few from the foreign delegation who, before joining the meeting room, took off his shoes– a widespread custom of Kosovo Albanians when entering a home.

This was perceived as a sign of respect for the hosts, but could just have easily been the health problem that had tormented Holbrooke for many years. Due to problems linked to being overweight and heart disease, his feet were swollen and he could not stand wearing his shoes. For many of his colleagues, it had become a normal sight to see his bare feet on the meeting table, or when he pulled off his socks and dried them on the plane in the pocket of the seat in front of him. 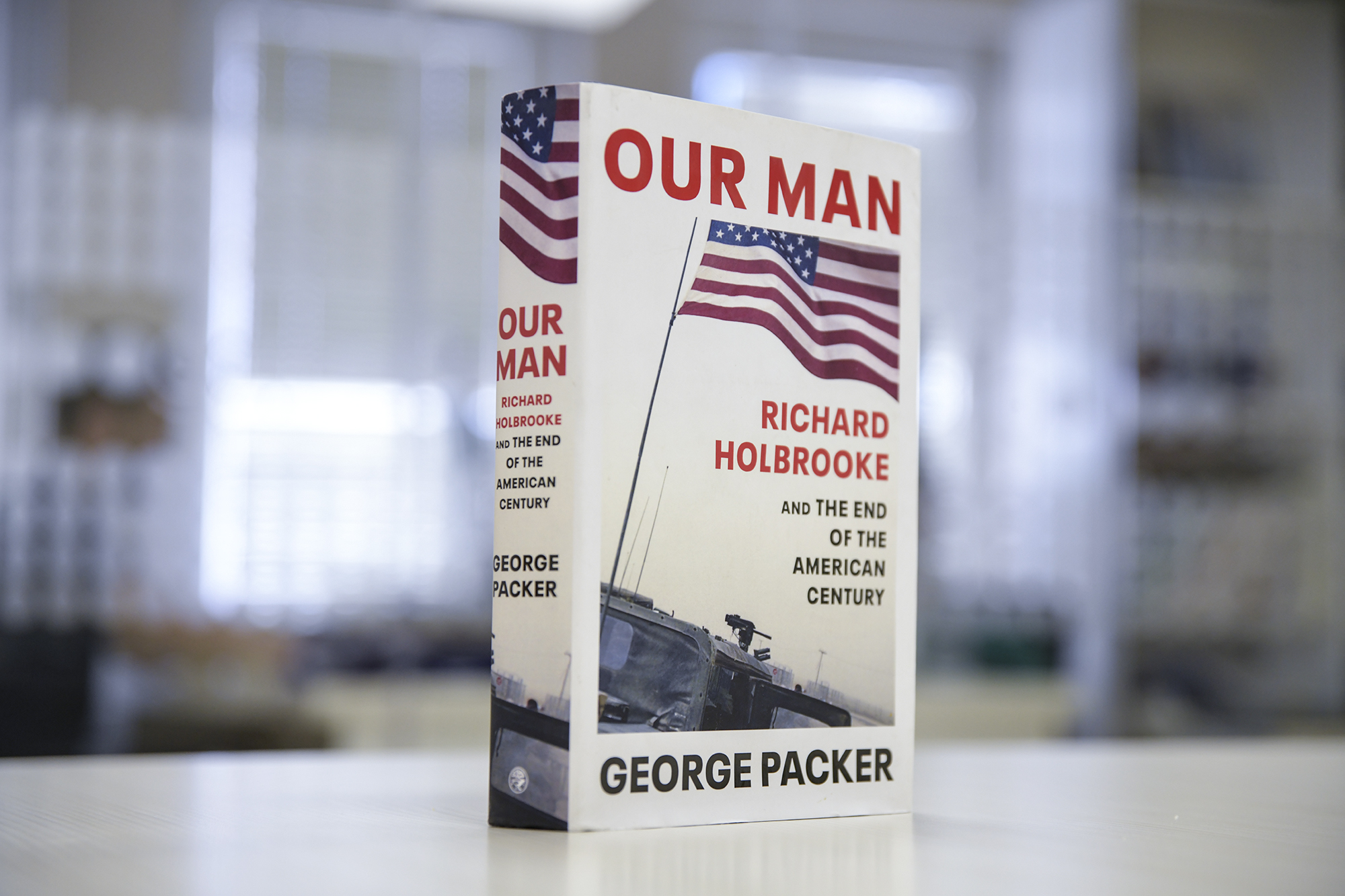 In his book, George Packer does not share details of Holbrooke’s engagement as a special representative in Kosovo. Neither backstage details of meetings with KLA representatives nor with political leaders in Kosovo are revealed. Nonetheless, his meeting with the guerilla group per se marked a change in U.S foreign policy towards the KLA. Hoolbrooke’s predecessor, Robert Gelbard, had never met with them, and previously labelled the KLA “without any questions, a terrorist group.”

Holbrooke likewise was the last one to meet with Milosevic before NATO launched its attack on Serbia on March 24, 1999. Holbrooke couldn’t accept the failure of his persuasive powers, and wanted to stay in Belgrade and keep talking. However, Albright told him to leave that afternoon. They would no longer plead with the Balkan butcher. Holbrooke’s role in the Kosovo war became so minimized, he began ironically referring to it as “Madeleine’s war.”

George Packer gives thrilling descriptions of the beginning of the conflict in the former Yugoslavia. According to Packer, “the question in the Balkans was always how far back to go. Serb nationalists went back to 1389, when at the Field of Blackbirds in Kosovo they fought the Turks. The Croatian president Franjo Tudjman liked to start with the breakup of the Roman Empire. President Alija Izetbegovic of Bosnia began his autobiography by noting that Bosnia was first mentioned as a distinct territory in AD 958.”

However, according to Packer, Serbian nationalism also emerged from a less militaristic act. In 1985, while a Kosovo Serb was trying to pleasure himself by sitting on a bottle, things went awry and the bottle broke. While in hospital, he declared that he was not responsible – rather, he was sodomized by Albanians. This claim was jumped on by Serbian academics, and in 1986 a political manifesto was written – referencing the act – that would put Serbian nationalist claims to paper, a manifesto which would play a huge part in the bloody Balkan wars to come.

George Packer’s book should be mandatory reading for Balkan politicians and beyond who insist on exchanging territories between Kosovo and Serbia. The book provides details of behind the scenes at the Dayton Agreement, when parties to the Bosnian conflict drew boundaries on their napkins, and Holbrooke had to serve as a courier of these napkins between Milosevic and Bosnia’s political representatives.

Holbrooke was an idealist in terms of his approach to foreign policy. Seeing the horrors of the Vietnam War, especially the suffering of refugees, he always insisted on greater involvement of US politics in solving international conflicts. He and his generation that served in the Democratic Party were classified as ‘neo-Wilsonian pragmatists,’ lobbying for a liberal approach to international relations. Holbrooke’s idealism pushed him to lobby for the rights and acceptance of refugees, from those affected by the conflict in Cambodia to that of Kosovo.

It was Holbrooke and his associates who, during President Carter’s mandate, solidified the status of human rights as an integral and permanent part of American foreign policy, which Kosovo would benefit from by the end of the 20th century.

Holbrooke was an advocate of President Clinton’s commitment to the United States’ relations with other countries, and George Packer links Holbrooke’s career with the rise and fall of US foreign policy. According to Packer, the ’90s were the golden age for the United States, the time when the United States emerged victorious from the Cold War, a period which ended with the September 11 attacks in New York. It was fortunate for Kosovo that the issue was resolved in this period, after the end of the Bosnian war and just before the September 11 terrorist attacks.

Richard Holbrooke died on December 13, 2010, while working as a US Special Envoy for Afghanistan and Pakistan. In the last years of his career, he was despised by the Obama administration. Holbrooke had escaped dismissal on the fact that the Secretary of State Hillary Clinton couldn’t break it to him that Obama had requested he be dismissed from his position.

Despite nearly five decades of service to his country, including six years in Vietnam, the Pentagon refused his family’s request to have him buried in Arlington cemetery, where the souls of war veterans lay. He was not laid to rest until 2015.

George Packer portrays Richard Holbrooke with all his virtues and flaws. According to Packer, if you cut out the destructive element of Holbrooke, you would kill the thing that made him almost great. Therefore, the reader could never understand why Holbrooke did not achieve his dream of becoming Secretary of State if he would not even learn about the flaws in his character.

Packer dedicates so much of the book to sharing and considering Holbrooke’s personal and professional suffering. Particularly impressive is the detailed description of Holbrooke’s last minutes of life, which remain etched in the reader’s memory even after turning the last page.

In Kosovo, Holbrooke is remembered with admiration, even though his role was marginal in the struggle for peace in Kosovo. There is a street named ‘Richard Holbrooke’ in Kosovo’s capital, Prishtina. In the center of the small town of Vitia, not far from the American base Camp Bondsteel, a bust of him was raised in his memory, although I am convinced that the monument’s sculptor had no idea what Holbrooke’s role in Kosovo truly was. Perhaps because of ignorance and the obsession to raise monuments everywhere, we honor Holbrooke more for his idealism rather for his real engagement. Kosovars have accepted Holbrooke as “our man.”