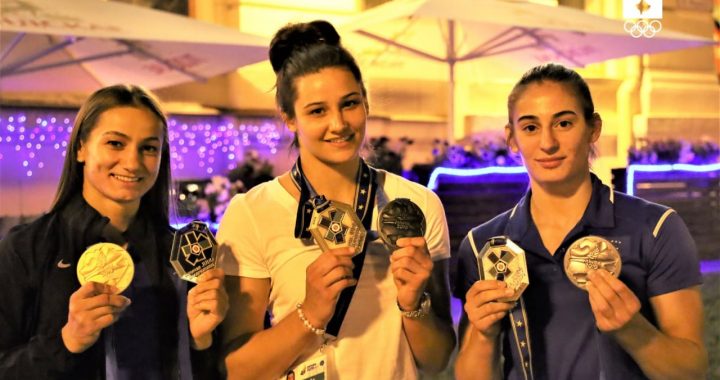 In the space of just a few years, Kosovo has become a major player on the world judo scene thanks to Majlinda Kelmendi, two-time world champion, 2016 Olympic champion, and most recently, gold medal winner at the 2019 European Olympic Games in Minsk, taking first place in Belarus for the first time in her country’s history.

12 athletes represented the Kosovo national Olympic team at the Games in Minsk in judo, boxing, karate and table tennis. The team returned to Kosovo on Sunday bringing three medals for judo, with Kosovo showing its dominance in the sport once again.

Kelmendi, the most successful Kosovo athlete in the sport’s history, was one of the brightest stars of the games. Injured for the previous European Olympic Games in Baku in 2015, this was her debut at the event, competing in the -52kg weight category.

“The best moment of the day? Definitely the final,” said Kelmendi upon her return to Kosovo. “I already knew I had won a medal, but I wanted more. For me, the silver is not the same feeling, because when you have silver you see someone else taking the gold.”

In the final, Kelmendi defeated Russian Natalia Kuziutina, after defeating Swiss Fabienne Kocher in the second round, Polish Karolina Pienkowksa in the quarterfinals and the French favorite Amandine Buchard in the semifinals.

Kelmendi’s 2019 gold medal is the first gold that Kosovo has ever won at the European Olympic Games, while for the judoka it is the fourth gold medal she has won this year. Kelmendi brought home two gold medals in January following the Tel Aviv Grand Prix, and one gold at the  Dusseldorf Grand Slam in February.

She won her first world title for Kosovo in 2013, which was officially recognized by the International Judo Federation, IJF, a year earlier. However, in 2014, when the world championships were held in Russia, she was forced to compete under the federation’s acronym, IJF, because the host nation refused to allow her to compete for Kosovo, a nation that Russia does not officially recognize.

Upon returning to Kosovo, Kelmendi spoke of her success in Minsk.

According to her, she was very happy that after 14 months of being unable to compete, she managed to win the gold medal at the European Championship. In total, Majlinda Kelmendi has won 43 medals during her career, 31 gold medals, six silver, and six bronze medals.

Another successful Kosovar judoka, Nora Gjakova, won a silver medal at the Games.

She came out on top against French Priscilla Gnettor, Pauline Starje of Germany and Portugal’s Telma Monteiro to advance to the final round, but was then defeated by Russia’s Daria Mezhetskaia in the -57 kg category.

An improvement for Gjakova, this was the second medal she has won at the European Olympic Games, winning a bronze medal when she previously competed at the 2015 games in Baku, Azerbaijan.

Kosovo’s third medal was brought home by Loriana Kuka who won a bronze medal after defeating Germany’s Luise Malsahn in the -57 kg category.