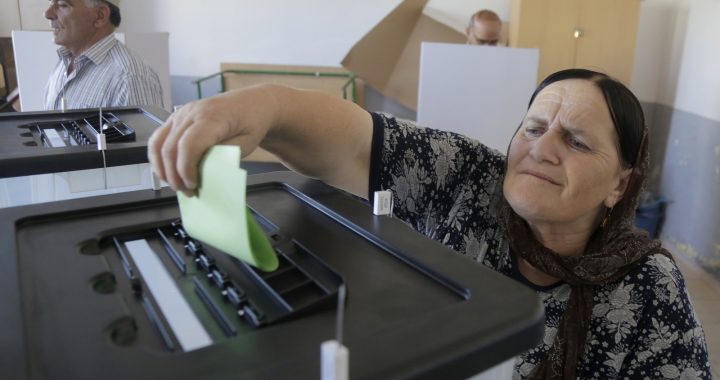 An elderly Albanian woman casts her vote at a polling station in Tirana. Photo: EPA-EFE/MALTON DIBRA.

Sunday’s local elections in Albania ran more smoothly than expected – but an opposition boycott will leave the Socialist-led government struggling to defend the result as legitimate.

Fears of violence in Albania diminished on Sunday during the contested local elections which were boycotted by most of the opposition parties. However, a low turnout by mid-afternoon suggested that the Socialist-led government would struggle to present the election results as democratically legitimate.

About 3.5 million Albanians were entitled to vote in the  elections, but the main opposition parties boycotted them, citing alleged collusion between the Socialist-led government of Edi Rama and organized crime networks in past elections.

On Sunday afternoon, the Central Election Commission, CEC, spokesperson Drilona Hoxhaj told a press conference that the turnout by 15:00 was only about 15.5 per cent – although he said the figure might well rise before polls closed at 19:00. The CEC estimated that voter participation by 18:00 would be 19 per cent.

As Socialist Party candidates had no or little competition in the municipalities, and were therefore expected to win all of 61 of them, meaning all 1,590 council seats, the turnout was the only topic of debate.

Election administration in Albania is based on commissions, on which all the main parliamentary political parties are represented. But as the opposition boycotted the elections, only Socialist representatives were present at commissions.

Klement Zguri, the nominal chairman of the CEC, who is routinely overruled by the four commission members nominated by the Socialists, gave an alternative press conference, downplaying the accuracy of the figure provided by the spokesperson, and calling it “a mere estimate.”

As Socialist officials took sole care of the election administration and vote count, the result is likely to be hotly debated.

Ivi Kaso, a representative of the main opposition Democratic Party, denounced what he called “a massive operation for manipulating the participation rate,” claiming the turnout was no more than 15 per cent.

At one polling station in Tirana, BIRN observed bored-looking election commissioners in a school building attempting to keep cool while waiting in vain for voters, who appeared in no hurry to show up.

“There were some [voters] early in the morning, but at noon no one came for almost one hour. The last person came about 10 minutes ago,” a commissioner told BIRN at Bajram Curri elementary school.

By 16:00 the turnout at that Tirana polling station was about 14 per cent, meaning 130 votes cast out of a potential 957 voters in all.

During the day, the opposition denounced what it called “massive pressure” on public employees to participate in the elections. The public sector in Albania employs some 170,000 people and is heavily influenced by politics.

The Socialist Party received 764,000 votes in that election, and that figure is expected to be the reference point to measure whether Rama managed to get his supporters to vote in the elections or not.

The run-up to the elections was marked by a high level of political violence as the opposition attempted to topple Rama through street protests.

Despite fears that the election would also be violent, pressure from Albania’s Western partners appeared to calm the atmosphere.

The Deputy Assistant Secretary at US State Department, Matthew Palmer, implicitly criticized the boycott last Friday in an interview for Voice of America’s Albanian service, saying the US did not agree with “obstructing elections.”

Unlike the Molotov bombs and fireworks used in previous protests, opposition supporters on Sunday used more ironic methods to protest, wearing Communist-era regalia to recall the time when Albanians were obliged to participate in single-candidate elections.

In Tirana, protesters wore Communist-era military uniforms and organized a mock vote count in which current Socialist mayor Erion Veliaj won 100 per cent of the votes.