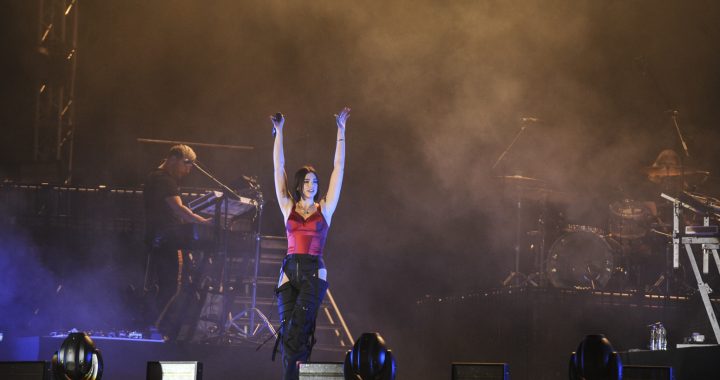 Appearing in front of thousands of fans in Germia Park for the Sunnyhill festival, Lipa sang her major hits including 'One Kiss' and 'New Rules.' | Photo: Atdhe Mulla.

A star-studded lineup including Miley Cyrus was announced over the last seven days for the second edition of the Sunnyhill festival, kicking off in Prishtina at the beginning of August.

British-Albanian artist Dua Lipa has announced the three main headliners scheduled to perform at the second edition of the Sunnyhill music festival in Germia Park in Prishtina from August 2 to 4.

The festival, organized by Lipa and her father, Dukagjin Lipa, will be headlined in 2019 by American artist Miley Cyrus, Scottish DJ Calvin Harris and American-Albanian rapper Gashi.

In 2018, the festival was headlined by Lipa herself, alongside American-Albanian artist Action Bronson and Dutch DJ Martin Garrix.

Sunnyhill became the biggest musical event to be organized in Kosovo, hosting around 50,000 people across the three-day festival in Germia park, despite available capacity being recorded at only 15,000 at one given time.

In a series of Instagram videos posted on Monday morning, June 28 and June 24, Lipa confirmed to her followers that Miley Cyrus would be performing the first evening of the festival, Gashi the second and Calvin Harris the third and final night in Prishtina’s national park.

The lineup has slowly been announced since June 19. Other acts that will be performing include Bondax, Merk & Kremont, Rrrron, Klangkarussell, Col3trane, Ledri Vula, Generik, Njomza and Kida.

It has not yet been confirmed whether Dua Lipa will return to the stage this August to perform in her hometown for the third time.

This year, one ticket will cost 80 euros, a markup of 25 euros from last year.