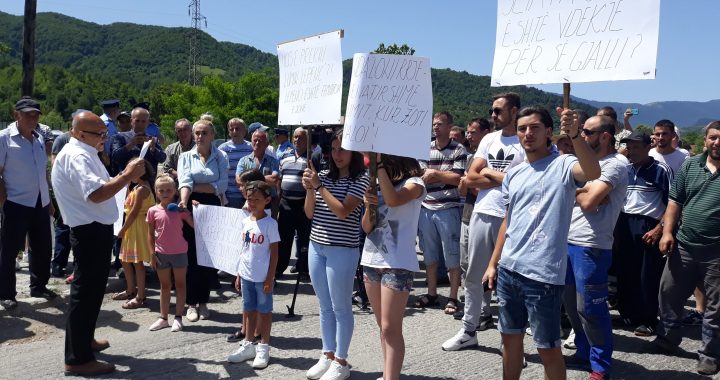 Kosovo Albanians and Serbs protested together against the construction of hydropower plants in Strpce on Monday, claiming that their life, agriculture and tourism will be affected by the plans if construction continues.

Holding banners reading “Without water, life cannot continue” and “We will not give up Lepenc,” both Kosovo Albanians and Kosovo Serbs held a joint protest demanding a halt to plans to build more than five hydropower plants across the Lepenc river in the Municipality of Strpce.

During the protest, which was held in the village of Biti in Strpce on Monday, demonstrators claimed that their lands cannot remain fertile and the tourism that many of the residents depend on will be damaged if the plans continue to be implemented.

According to Hamdi Rushiti, a representative of the village of Biti, “If the water from the Lepenc river disappears, the degradation of our land with be irreparable and the loss will be catastrophic for these villages. Without water this land is dead, and there will be no agriculture, no tourism and, to put it shortly, it will die.”

The Matkos Group, a company based in Prishtina, is in charge of the hydropower plant construction, and has planned five different mini hydropower projects in the Municipality of Strpce according to the website of the Energy Regulatory Office in Kosovo, ERO.

In January, the municipality of Strpce decided to halt the construction of the hydropower plant as a result of citizens protesting against the plans.

Strpce, a Serb-majority municipality located in the south of Kosovo not far from the Macedonian border, rests within the Sharr Mountain National Park. However, the construction plans for hydropower in this area fall out with the border of the national park itself, so are not in the protected area that would preclude the possibility of construction.

The lack of public consultation between the institutions responsible for construction of the plants and the communities that will be affected by their operation has been a topic of heated debate among protestors.

Article 52 of Kosovo Constitution specifically requires that communities be provided “an opportunity to be heard by public institutions and have their opinions considered on issues that impact the environment in which they live.” According to protestors, this has not been made available to them.

“The construction of hydropower fills some pockets, but impoverishes hundreds of families,” said Diana Metushi Krasniqi, a member of the Kosovo Democratic Institute, KDI, who participated in the protest.

The municipality of Strpce has not provided an explanation as to why the construction of hydropower has continued.

The Kosovo government has pledged to utilize both new and existing hydropower, the process of siphoning water to generate electricity using Kosovo’s rivers, to its full potential, as part of their promise to rely on 25 per cent renewable energy for electricity by 2025.

In the Ministry of Economic Development’s National Renewable Energy Action Plan, the completion of at least five extra mini hydropower plants is foreseen between 2018 and 2020.

In 2016, the Assembly of the Municipality of Strpce, with no specific time frame, suspended all building activities related to the construction of small hydropower. It is not clear whether this suspension has been lifted.

Currently there are six mini hydropower plants in operation which have the capacity to generate up to 10 MW of electricity, located in Strpce, Decan, Dragash, and Mitrovica.

There are currently 87 planned projects involving hydropower in Kosovo, with more than 25 existing plants constructed in protected areas, according to the NGO River Watch’s ‘Save the Blue Heart of Europe’ campaign report, with the potential to damage Kosovo’s rivers irreversibly.