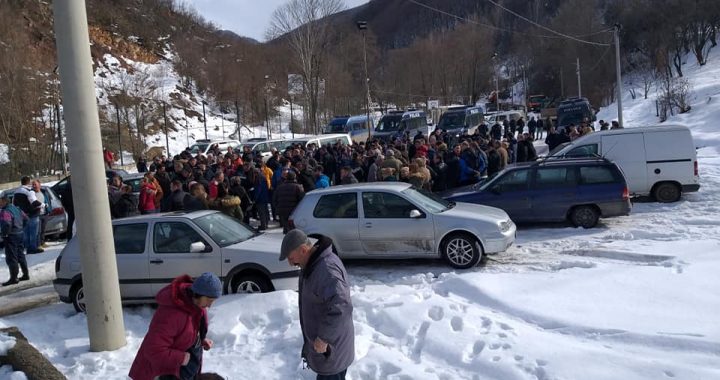 On Tuesday and Wednesday, people from the Municipality of Strpce gathered in protest the construction of a mini hydropower plant in Obe Reke, citing damage to their water supply during construction.

Excavation currently underway to build a mini hydropower plant in the Municipality of Strpce was interrupted on Tuesday by protestors attempting to halt the construction of the plant by the Matkos Group.

According to Serbian media organization N1, peaceful protesters assembled at the site of construction and requested access to official permits for the construction. However, no authorities they have requested information from shed light on Matkos’ authorizations to build, they said.

The protests began following damage during excavation work following hydropower plant works, to a water reservoir in the municipality that supplies water to around 2,500 citizens, according to Radio Kim.

A police unit from nearby Ferizaj was deployed in an attempt to end the protests on Tuesday as well as Wednesday, to allow the workers to continue with construction.

Matkos Group, a company based in Prishtina, is in charge of the hydropower plant construction, and has planned five different mini hydropower projects in the Municipality of Strpce according to the website of the Energy Regulatory Office in Kosovo, ERO.

One of these plants has been in operation since January 2016, and three have been granted authorization for construction.

Strpce, a Serb-majority municipality located in the south of Kosovo not far from the Macedonian border, rests within the Sharr Mountain National Park. However, the construction plans for hydropower in this area fall out with the border of the national park itself.

In 2016, the Assembly of the Municipality of Strpce, with no specific time frame, suspended all building activities related to the construction of small hydropower. It is not clear whether this suspension has been lifted.

According to N1, officials from the Municipality of Strpce who have the power to hand over licenses to mini hydropower construction companies have been silent on the issue, but several people in attendance on Tuesday were called by the police for interview regarding the protests.

Currently there are six mini hydropower plants in operation which have the capacity to generate up to 10 MW of electricity, located in Strpce, Decan, Dragash, and Mitrovica.

The Kosovo government has pledged to utilize both new and existing hydropower to its full potential, the process of siphoning water to generate electricity using Kosovo’s rivers, as part of their promise to rely on 25 per cent renewable energy for electricity by 2025.

The plan has been criticized by Kosovo citizens and environmental organizations, for negative consequences of its hydropower plan, especially in National Parks such as the Accursed Mountains and Decan Municipality, where three hydropower plants are located.

Studies have identified more than 70 locations where hydropower plants can be built and installed. These plans were widely accepted by Kosovo institutions, regardless of the scarce water availability in Kosovo.

A report on the state of water from the Ministry of Environment and Spatial Planning, published in 2015, says that Kosovo has around 1,600 cubic meters of water per capita, the lowest in the region, and not enough to fulfil the necessary amount needed to sustain the population, regardless of hydropower construction. The report states that the distribution of water is both “unequal and inadequate” in relation to demand.

The Kosovo Energy Regulatory Office published a list of companies which have been awarded licenses to generate, import, export or supply electricity using hydropower, on which Matkos is listed.

The Ministry of Economic Development reviewed the incentive scheme for feed-in tariffs for hydropower plants in 2018 in their National Renewable Energy Action Plan, amending the amount the government will pay to buy renewable energy for use in Kosovo from private companies such as Matkos.

The Energy Regulatory Office, ERO, increased the amount the Government pays from 63.3 euros to 67.3 euros per MWh, which is one million watts of electrical power produced continuously for one hour, for electricity generated through small hydropower such as the one planned to be built in Strpce, paid to Matkos.

“It destroys the ecological flow of the river, damaging the entire ecosystem, everything from the animals that rely on the river to the communities around it,” said Frank.

The protests against the construction of the plant and the damage to the water reservoir will continue on Thursday.