Next to KEK, a toxic blue lake that could spell disaster

The Kosovo Energy Corporation is pumping millions of tons of ash produced by its coal plants each year into a former mining pit, creating a potentially disastrous chemical pond.

In the former coal mines of Mirash, environmental calamities are amassing in Obilic. Only 500 meters away from the regional sanitary landfill, the Kosovo Energy Corporation, KEK’s ash dumpsite is already contaminating the Sitnica River with apparent impunity.

In 2006, KEK decided to replace the old ash transport and disposal system, which constituted a public health threat due to the massive amounts of ash particles left in the air.

The new hydrologic system was extended in 2013 to collect ash both from Kosovo A and B, with the World Bank paying one million of the 10 million euro project.

Since then, the million tons of ash produced each year by the two coal-fired plants are mixed with clean water and transported through pipes into an old open pit mine, resulting in the creation of the so-called Blue Lake.

The stunning turquoise hue of the pond covers an area of 15 football pitches – making it easy to identify on satellite views – and brings to mind the beautiful beaches of the Caribbean. But a 2016 hydrological study conducted by the German development agency GIZ revealed that its water quality indicators are flashing red.

“I would generally doubt whether it is a good idea to even call it water, because it is just a chemical substance on its own,” said Ewelina Rathje, a hydrogeologist who conducted the analyses for GIZ in June last year.

KEK, on the other hand, argues that based on their latest analysis made in March 2017, the only issue with the Blue Lake is its high pH level.

Both GIZ and KEK measurements show the the coal ash pond’s pH level to be far above the legal limit. According to Rathje, its level of 12 (on a scale from zero to 14) is the same as bleach. “It’s basically Domestos, which you use for toilets,” she said, adding that such a substance should not be in contact with groundwater or any other natural body of water.

The eastern shore of the Blue Lake is located only 200 meters away from the Sitnica River, in a former mining hole dug under the river’s water level, therefore increasing the risk of contamination of surrounding waters.

Mustafa Hyseni, Head of the Department of the Inspectorate at the Ministry of Environment and Spatial Planning, MESP, however, is skeptical that this can happen.

“KEK first isolated the location where the lake is, which previously served for the extraction of coal and other activities, in order for the water of the Sitnica River to not become part of the extraction location,” he explained.

However, the stable water levels of the pond–despite the daily inflow of water mixed with ash–suggests that the water must be escaping the lake in one way or another. Following her hydrogeological investigation, Rathje argued in 2016 that the toxic water might be potentially polluting the soil.

“This water leaves the ash on a dump and is flowing into the lake but the lake is not getting bigger. What this means is that once the new water is flowing in, the polluted water is infiltrating to the groundwater at the same time.” 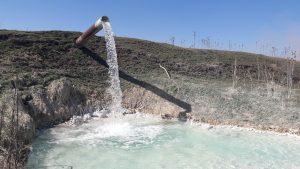 The situation is even more grave considering that during her water quality assessment, the GIZ expert did not notice a pipe discreetly emerging from the pond and traveling 250 meters–sometimes underground–in the direction of the Sitnica River.

On the other end of the conduit, a waterfall feeds an artificial creek that empties into the Sitnica River a few dozen meters away. The polluted liquid pumped out from the Blue Lake by KEK is thus discharged into Sitnica without being treated.

Different cases all around the world, such as the Little Blue Lake in United States, have highlighted the heavy damages caused by uncontrolled discharges of water mixed with coal ash on the environment, which often irreversibly contaminate water resources.

Among the multiple other sources of water contamination, KEK’s illegal discharge of contaminated industrial water contributes to making Sitnica the most polluted river in Kosovo, as the Kosovo’s Environmental Protection Agency qualifies it in its latest Report on the State of Water. Ultimately, the pollution does not only impact wildlife, but also potentially contaminates the numerous wells that supply area inhabitants with fresh water.

A look at Google Earth’s satellite views of the area over time suggests that KEK has been discharging water from the Blue Lake since 2010. Yet KEK does not explicitly admit releasing contaminated water into the Sitnica River and denies that its operations have a significant impact on its waters.

KEK argues that the samples collected from the river do not exceed the limit values determined by the MESP’s Administrative Instruction on wastewater discharge. However, the evidence they cite to support their claim is not in compliance with the administrative instruction, which requests sampling to be done pre-discharge into the river, not after, as KEK does.

As far as the MESP is concerned, the Inspectorate does not seem to be aware of the matter.

“KEK does not drain the lake,” ensured Hyseni, adding, “if such a thing was happening it would be illegal and without any paperwork.”

MESP representative must therefore have been surprised when an EU experts mission, led by Rathje, invited the MESP to visit the Blue Lake’s illegal discharge pump a few days ago. Kosovo’s environmental authority, placed face-to-face with its responsibilities, had no other choice than to interrupt the pumping of polluted water from the Blue Lake into Sitnica. For now.

Mr. Capussela’s not so funny advice to his imaginary interlocutors

by Mikra Krasniqi
Next: Opinion

Response to a critic (what did citizens actually say?)