After years of mismanagement, Kosovo’s largest landfill poses an environmental disaster and may cause irreversible water contamination, researchers warn.

Mirash’s landscape has been shaped by decades of mining activities to feed Obilic’s coal-fired Kosovo A and B plants, leaving massive dark holes in the hilly landscape. The abandoned mining sites of Mirash became therefore an ideal area, secure and tucked away from public view, for activities that are now building up to a major environmental disaster.

Such activities include KEK’s disposal of ash, which has resulted in the creation of the so-called blue lake, as well as the burial of waste in the nearby landfill. Recent studies show evidence that the latter already constitutes a serious threat to the groundwater and the Sitnica river.

The situation in Mirash poses serious potential for an environmental catastrophe that would not only affect inhabitants in the direct vicinity, but could also spread much further.

There are ten official landfills collecting urban waste in Kosovo, and more than half of them are considered by the Kosovo’s Environmental Protection Agency, KEPA, to be environmental hotspots.

The Mirash landfill, located in the municipality Obilic, is especially worrying. This landfill of seven hectares – the size of ten football pitches – hosts waste from seven municipalities: Prishtina, Drenas, Lipjan, Podujeva, Gracanica, Obilic and Fushe Kosove. It is by far the biggest landfill in Kosovo. A third of all the waste produced by Kosovo inhabitants – 100,000 tons in 2015 – ends up in Mirash.

In Mirash, the results of the groundwater analyses are damning: the pollution has already started to spread to the underground premises of the landfill.

Years of mismanagement have made Mirash an environmental threat and the project seems doomed to fail.

Ewelina Rathje, an expert in hydrogeology who conducted a hydrological study in 2016 for the German development agency GIZ, said that the situation in Mirash is alarming.

“In Mirash, nothing is going well,” she told Prishtina Insight. Since the waste is not covered daily with soil, garbage flies away, accompanied by a strong, vomit-inducing stench. All sorts of garbage is disposed, including animal waste, which attracts packs of hounds, and medical waste, which could heavily pollute the surrounding water.

On one of side of the landfill, the thick smoke and the smell of methane indicate spontaneous fires resulting from the inappropriate deposit of coal. It increases the permanent risk of explosion within the landfill, where no degassing system has been installed. 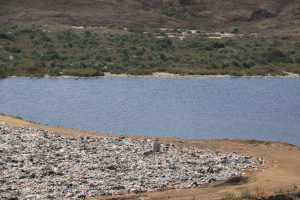 Kosovo Ombudsperson Hilmi Jashari fears that this situation could lead to an accident similar to the one in Turkey in 1993, when a landfill exploded due to the accumulation of methane gas. “This poses a permanent danger which could cause the death of people,” he explained.

Even if the situation in Mirash is not yet as disastrous, the landfill is already harmful for the environment and people living in the area.

According to the Head of Inspectorate at the Ministry of Environment Bedri Halimi, short-term measures could solve the problem.

“For at least the next four or five years, the landfill has the capacities to gather, compact and cover the waste going there,” he said.

Rathje disagrees, insisting that the worst may actually be yet to come with the contamination of underground water.

“The problem started before the landfill was even there, because the landfill should never have been placed there,” explained Rathje.

In 2004, the European Agency for Reconstruction, EAR, approved to use the former KEK mining site of Mirash and construct the landfill approximately 6 to 10 m below the natural groundwater level. This decision came with risks of contaminating the natural water resources and the formation of an artificial lake threatening to submerge the waste fill area.

For Professor Bexhet Shala, a geologist specializing in environment who participated to the GIZ study, such a location for a landfill is not typical.

Ultimately, building a landfill in these conditions is a bit like building houses on the seaside below sea level. It is possible – 25 per cent of the territory of the Netherlands is located below sea level – but requires special attention, technical knowledge and experience.

This is a bet of approximately 3.5 million euros that the European Agency for Reconstruction, an EU Institution that pushed the project forward and financially supported it, took, despite the warnings of a 2004 design report. The report, made by Golder Associates, a company appointed by KEK to design the landfill, highlighted the absurdity of this project due to the many risks linked to the location of the landfill.

A soil barrier was built between the artificial lake and the landfill to avoid water contamination and a pump was installed to control the level of groundwater and prevent the flooding of the landfill. The presumably clean water was then pumped into the nearby Sitnica River.

So far, the installation may have seemed under control, but this pretense of good management did not last long. Instead of building a proper facility to treat the leachate, a toxic liquid produced by waste, Golder Associates recommended to install a recirculation system that would rely on evaporation.

One year after the opening of the landfill, this system failed and the leachate overflowed in the landfill and the nearby lake, which became a mixture of toxic liquids, rainwater and groundwater. Since then the contaminated water cannot be pumped and discharged into the Sitnica River.

Today, the Mirash landfill is “just a garbage dumpsite,” according to Rathje. A hole dug in the wrong place, built in a wrong way, with the wrong infrastructure at a time when nobody really cared about the impact of the pollution of underground water.

Private company mismanagement after the landfill was built did not improve when capacities were transferred to the Kosovo Landfill Management Company, KLMC, admitted Abdullah Haxhiu, the company’s director.

To better understand the level of contamination of the underground waters in the premises of the landfill, Rathje and her team sampled water from various spots inside the landfill and the surrounding areas. Originally, this water was natural freshwater coming from the soil and rainfalls.

When stored in the soil, water is usually well isolated from contamination. This isolation, however, is a double-edged sword: when pollutants reach the groundwater, it remains in the soil. In Mirash, the results of the groundwater analyses are damning: the pollution has already started to spread to the underground premises of the landfill.

”I don’t think there is time, I think there is no space for optimism here,” declared Rathje after explaining that the waters in and around the landfill are already contaminated and the level of the “landfill lake” is rising by over one meter each year.

You can’t clean the groundwater; if it is polluted, it is polluted... The thing that I cannot understand, why has nothing been done for six years? Ewelina Rathje

If nothing is done, the contamination will spread all over the area, in the ground and on the surface through the Sitnica River, which spans more than 40 kilometers across Kosovo’s lands after passing Mirash, reaching Obilic, Vushtrri, and finally Mitrovica, where it then pours into the Ibar River. Many residents in the area have wells that they use for watering their vegetables, feeding animals and even sometimes for drinking water. Such pollution could therefore affect the lives of a significant number of Kosovars for generations.

In 2010, a report from the International Finance Corporation warned Kosovo’s authorities about the contamination of waters, urging them to take measures. At the time, the cost to rehabilitate the landfill was assessed at 3 million euro by IFC experts. Nothing has been done since then.

“The thing that I cannot understand, why has nothing been done for six years? This is something that, really, is dark magic for me because I find it unacceptable, because the problem keeps on rising and they [Kosovo authorities] knew it, because every KEPA report, every year, is mentioning this as a hotspot,” said Rathje when asked if the representatives of the Ministry of Environment and the Ministry of Economy  knew about the 2010 report and were aware of the situation in Mirash.

The pressure exerted by the EU office in Kosovo on the Ministry of Environment and Spatial Planning, MESP, through a letter of concern sent last October might help to breakup over ten years of status quo. The MESP’s Minister Ferat Shala answered the EU office a month later, insuring that “Kosovo’s Government is undergoing some negotiations with the Government of Germany for some financial aid.”

In his letter, Minister Shala also indicates that the MESP will use the grant awarded by the German Government in order to pump out the water that has leaked into the landfill, to deal with the issue of pollution at the landfill, to collect and channel methane that is released from the landfill, and  install necessary machinery that will improve its management.

Yet nowhere in this letter does the Minister mention the main concern raised by the GIZ research, which was the rising water levels of the lake that pose the risk of polluting groundwater.

In December 2016, Minister Shala did explain that a grant of eight million euros would be provided for the rehabilitation of all the landfills in Kosovo. The Mirash landfill is not the only landfill constituting an environmental risk, and eight million euros would not even be enough to cover Mirash’s rehabilitation and preventing groundwater contamination in the long-term. The situation has worsened over the last seven years, doubling or tripling the cost of restoring the landfill. This project would cost today “anywhere between seven to ten million euros,” according to Rathje.

The measures that MESP wants to implement in Mirash will certainly improve the situation, but if no long-term actions are being taken to counter water contamination, it will have lasting negative impacts for Kosovo residents. Once groundwater is contaminated, there will not be a plan B, because polluted groundwater cannot be replaced in within a month, a year, or even a decade.