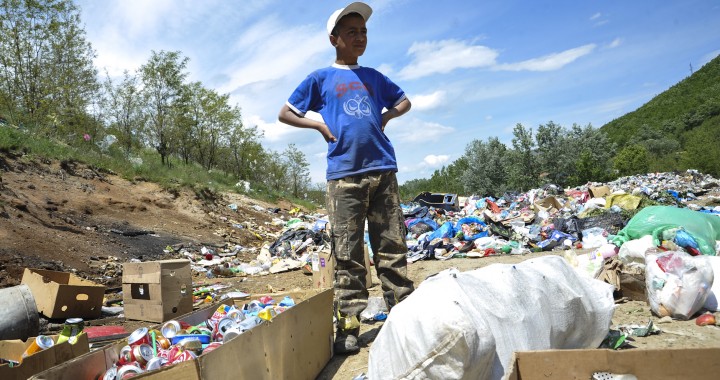 The UN expresses regret for north Kosovo’s Roma communities who suffered lead-poisoning in UNMIK-run IDP camps, but does not offer a plan for individual compensation.

The United Nations Secretary-General, Antonio Guterres, expressed regret for the suffering of Roma that lived in the poisonous conditions of displaced persons camps run by the UN Mission in Kosovo, UNMIK.

“The Secretary-General wishes to express the Organization’s profound regret for the suffering endured by all individuals living in the IDP camps,” Guterres’ spokesman Stephane Dujarric said in a statement on Friday.

Thousands of Roma were displaced from Mitrovica in 1999 when Albanians attacked the Roma Mahalla community as Serbian forces were withdrawing from Kosovo. Between 1999 and 2001, the UN placed 700 Roma in IDP camps near the Trepca mining complex.

The location of the camps put people in direct danger, as they were close to Trepca’s lead smelter and mining waste storage dams. The toxic environment in which the displaced Roma lived caused severe illnesses and even death.

UNMIK did not close the camps despite reports from health officials, including the World Health Organization. They remained open until 2010.

In a February 2016 opinion (released in April 2016), the UN’s Human Rights Advisory Panel, HRAP, recommended that UNMIK publically acknowledge its failure to comply with human rights standards and provide compensation for the victims. In July 2016, HRAP’s annual report concluded that UNMIK remained unaccountable for adjudicating human rights abuses, cooperating with investigations, and implementing the Panel’s findings.

Almost a year later, the UN responded to the HRAP’s report on May 26, 2017, saying that “the Secretary-General is keenly aware of the particular plight of those individuals, as well as the other members of these most vulnerable communities who also lived in the IDP camps.”

The statement did not offer a direct apology or a compensation plan for the victims, but a promise to establish a broad-reaching trust fund.

“The Trust Fund will implement community based assistance projects, primarily in North Mitrovica, South Mitrovica and Leposavic, which will benefit more broadly the Roma, Ashkali and Egyptian communities. The assistance projects will focus on the most pressing needs of those most vulnerable communities, including with respect to health services, economic development and infrastructure,” the statement reads.

The Secretary-General Spokesperson said that the Organization will consult with member states to mobilize resources for the fund and called upon the international community to support the initiative. No resources have been pledged yet.

Louis Charbonneau, UN director at Human Rights Watch, said that by promising a community assistance fund rather than individual compensation, the UN was selling “victims of its own negligence” short.

“When he took office, Secretary-General Guterres promised to build a culture of accountability and make victims of UN wrongdoing a priority. Apparently that doesn’t apply to the men, women and children poisoned in Kosovo over a decade ago,” Charbonneau’s statement reads.

“Secretary-General Guterres inherited this problem, but he can still change course and implement the UN’s own advisory panel’s recommendations, most importantly by providing victims and their families with adequate individual compensation.”