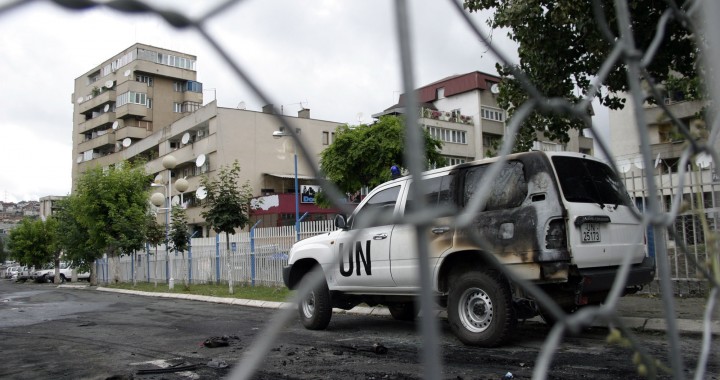 A detroyed car seen at United Nations Mission in Kosovo headquarters July.3.2005 after explosion that happend late Saturday, July 2nd, following at least three blasts that targeted the UN administration's headuqarters as well as the offices housing the province's government. The Organisation for Securoty and Cooperation in Europe (OSCE) was also targeted in the attack that caused material demagae but no injuries. Kosovo has been adminsiterd by the UN since 1999.(AP Photo/Atdhe Mulla)

In its annual report, a UN internal human rights mechanism rails against the UN’s inability to adjudicate human rights abuses, co-operate with investigations, or implement the panel’s findings.

An internal attempt to adjudicate human rights abuses perpetrated by the UN Mission in Kosovo, UNMIK, has been deemed a “total failure” by the organization’s Human Rights Advisory Panel, HRAP.

The body was assembled in 2006 by the UN as an internal mechanism to adjudicate complaints of human rights violations made against UNMIK since it was established in 1999. Now, nearly 10 years later, the panel’s mandate has ended and its members have raised concerns that the wrongs they investigated will never be righted.

“UNMIK remains as unaccountable now for the human rights violations that it committed as it was in 2004 when the Venice Commission proposed to establish a mechanism to bring some oversight to UNMIK’s compliance with human rights standards,” reads the conclusion to the stinging 49-page report, which covers the panel’s findings on 88 cases handled during 2015 and 2016.

“Due to UNMIK’s unwillingness to follow any of the Panel’s recommendations and UNMIK’s general intransigence, the HRAP process has obtained no redress for the complainants. As such, they have been victimized twice by UNMIK: by the original human rights violations committed against them and again by putting their hope and trust into this process.”

This is the eighth and final annual report, which includes all proceedings from 1 January 2015 to the end of its ruling in May 2016 and on July 1, the panel ceased all operations. The panel voices particular frustration about the poor level of cooperation they received from UN authorities, saying that this process had been turned into “a human rights minstrel show.”

After the Kosovo war, UNMIK took charge of the entire administration of Kosovo, including courts and police. It held the responsibility of investigating and prosecuting crimes until these duties could be passed on to an established Kosovar government.

The panel found that UNMIK’s governance at the time marked by a “lack of adequate criminal investigations in relation to disappearances, abductions and killings.”

Particular weight was given to the panel’s finding earlier this year about the UN’s negligence in putting Roma displaced by the Kosovo war onto land contaminated by lead and not finding a durable solution for more than a decade.

HRAP decisions are non-binding but are meant to serve as recommendations to the mission. However, the UN has been wary of implementing them because of the precedent it could set in other cases where it has been called to account, including over a cholera epidemic in Haiti in which UN Peacekeepers are believed to have brought the disease to the impoverished island, and over sex-abuse scandals tied to the mission in the Central African Republic.

In the foreword, Marek Nowicki, a presiding member of the former panel, acknowledged a lack of appropriate action being taken by the UN following HRAP’s rulings.

“I must highlight again with deep regret the general structural problem that exists, namely the lack of implementation of the Panel’s opinions, especially with regard to UNMIK paying financial compensation to the complainants, as well as the lack of significant progress of [the E.U. Rule of law Mission in Kosovo, Eulex] or of Kosovo law enforcement institutions’ continuing investigations regarding the Panel’s cases related to abductions, disappearances and killings,” he wrote.

In response to these and other violations regarding failure to investigate murders and disappearances, the panel recommended that UNMIK “publicly acknowledges, within a reasonable time, including through media, responsibility with respect to its failure to adequately investigate the disappearance and killing of the victims and make a public apology to the complainants and their families in this regard.”

Jan Malekzade, a spokesman for UNMIK, said that the report is not a final representation of the panel’s efforts and that the Special Representative to the Secretary-General, SRSG, had taken them into account.

“UNMIK values the work of its advisory panel, as evidenced by the decisions issued by the SRSG on the Corresponding Opinions, and appropriate consideration has been given to the HRAP’s work in regular reports of the Secretary-General on UNMIK. Regarding the HRAP’s Opinion on the recent case of “N.M and Others” (26/08) (submitted to HRAP by 138 members of the Roma, Ashkali and Egyptian communities), as per established practice, the SRSG has issued a decision on all its aspects, and has brought the HRAP’s recommendations on issues regarding compensation to the attention of Headquarters. As such, we are carefully giving due consideration to these issues,” Malekzade said.

Dianne Post, the lawyer who represented Roma seeking compensation for the damage caused by lead poisoning, said that the lack of action on the panel’s recommendations highlights the inability of the UN to follow its own rules.

“This is 2016. UNMIK was told over and over again to make a public apology, which they never did,” said Post. “When they became the authority, they had the responsibility, and they didn’t act when they were told repeatedly to act. That’s what we’re asking you to apologize for. This is not acceptable behavior by an international organization that has such an important role in the world to uphold human rights and law.”

Jennifer Brush, who served as Deputy Special Representative to the Secretary-General for UNMIK in 2014 and 2015 said that she was supportive of the efforts of both HRAP and UNMIK, but would never encourage a UN mission to take on those responsibilities again.

“I understand why they did it, it was the best we could do after the peacekeeping in 1999, but it did not work,” Brush said. “We are [now] supportive of the efforts in order to prove that it didn’t work so that the UN  [doesn’t] do it again.”

Brush went on to say that what isn’t often understood is that UNMIK no longer functions with the authority that it did, and that responsibilities to victims are now held by EULEX.

“During my time, I met with a lot of the survivors and missing and murdered person groups, and shared their anguish, and the only thing I could tell them was that if they wanted to pursue their claims, they had to go through Eulex. They can blame UNMIK, but we can’t do anything at this point, because all those responsibilities are with Eulex, now,” said Brush.

Brush said that after disinterested responses from Eulex, she began advocating for alternative efforts to console the victims.

Post, who has filed several legal complaints against the UN in her time representing the Roma, said that in order to hold the UN accountable there needs to be a directive that first states who the UN are accountable to.

“There always has to be some balancing power when you have such a powerful organization,” said Post. “The only thing balancing the UN’s power is the money that the member states put in. That’s not a very positive way of bringing about change.”

Statements made by HRAP demonstrate that internal accountability measures do not work, brought home in the report’s conclusion:

“For its part, the Panel apologizes profusely to the complainants for its role in this sham.”