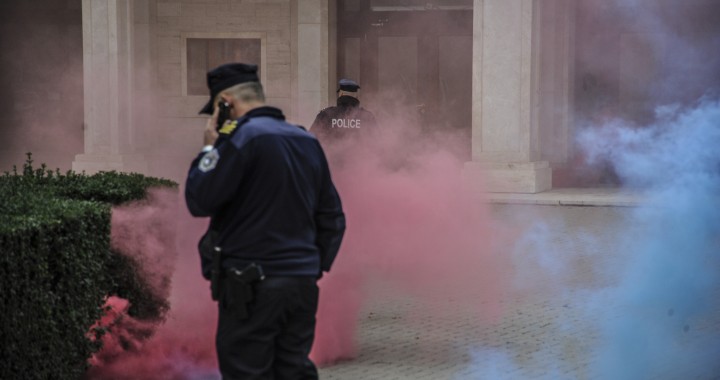 The Kosovo Police should step up its social media game

With an official Facebook page, and an unverified Twitter account, the Kosovo Police use social media only to publish press releases. Here’s what they should do instead.

In today’s economy, social media is a resource not just for traditional brands and businesses but also for the police and other law enforcement units. It helps humanize the force by making it more connected to the general public, but most importantly by being a tool that police officers use to share information faster and respond to tips from citizens (who are often more active and reachable on social media than in real life).

The Kosovo Police has over 7,000 officers and a well-structured force separated into departments, operations, and other relevant units. What it does not have is a social media presence.

Kosovo is one of the most electronically connected countries in the Balkan region with over 1.1 million active internet users. The country’s digital diplomacy has been awarded and mentioned as a successful case study around the world, and most politicians are particularly committed to communicating through Facebook and Twitter.

Another important state security authority in Kosovo, the Kosovo Intelligence Agency (KIA) has no social media presence whatsoever.
What’s happening in the world at large

Men in blue in the United States are taking social media by storm. For example the New York and L.A. police departments, NYPD and LAPD respectively, have a powerful presence on Twitter with different accounts specifically focused on news, precincts, chiefs or special units. They tweet news, tips, press releases and engage with followers. The same goes for Facebook.

Compared to Kosovo’s Intelligence Agency, American agencies including the CIA, Homeland Security, FBI and many other units are present in different social media platforms and engage their readers with different posts.

When the CIA officially launched its Twitter account (@cia) about 2 years ago, with the famous tweet “We can neither confirm nor deny that this is our first tweet,” it took the internet world by storm, creating more than 300,000 retweets and over 240,000 likes. The U.S. Transportation Security Administration, TSA, uses an Instagram account with over 400k followers to share what people try to sneak onto airplanes.  A simple search online shows that there are many cases that you can find how law enforcement units are using social media across the world. The state of Utah even has guidelines for using 27 blogs, 100 twitter accounts, and more than 800 online services.
Of course, social media can be a double-edged sword. The NYPD had a famous social media moment with its #mynypd campaign. The campaign backfired when the police department asked New Yorkers for photos with cops and Twitter was quickly filled with unflattering pictures of officers making arrests, roughing up citizens and in some cases wielding their weapons.

What can Kosovo do

1. Have a strategy in mind – First and foremost it needs to have a strategy that works. It should start with what tools to use and prioritize and how to use them. Each tool is specific and has its advantages and disadvantages. There should be a specific social media team which should develop metrics to track and benchmark achievements. Training should be developed in cooperation with the private sector. The strategy would also define if there would be separate accounts for Police Units in Prishtina, Peja, Gjakova and other municipalities, or if there would be a centralized general account that would serve everyone.

2. Department Policy – Due to the nature of the legal risks, there should be relevant policies in place that take care of unexpected risks. This would cover how to deal with rude comments, how to engage with commenters, fans, and followers. This policy is important because it also guides the “men in blue” in terms of what is acceptable to share and how they should behave with social media. For example, sharing pictures of random police checks from different areas in Kosovo is more acceptable than sharing pictures of someone that has just been arrested.

3. Staff – There should be at least one person per department, depending on size and amount of engagement involved. But that same person doesn’t have to create all the content. All officers at all levels will have to post content.

4. Engage – If the Kosovo Police is not ready to post constant and engage with citizens, then it should wait until it is ready to do so. It’s very important to launch but not to abandon the social media presence, because in case that happens, the police or whatever department loses credibility and it faces a very difficult time if it wants to re-launch a social media campaign. Things can get out of hand quickly in the digital world.

5. Transparency – Police Departments across the world are scared of social media because they think that too much will get out. The truth is that social media allow the forces to be heard, to be personal and to share a culture that people would love to see. Social media also allows the public to communicate with the police.

6. Twitter and Engagement – When present on Twitter and when starting to have followers, the departments should engage with their followers. It’s not a good strategy to have thousands of followers and not follow anyone back. Continue to follow and go as far as using Twitter Periscope to do live stream on Twitter or use Facebook Live on the other side to do the same. Especially during the summer a lot of accidents happen on the roads and with proper engagement, the police can do much more work.

7. Get help from experts – All that was mentioned above needs careful planning and execution. Hiring an agency or an expert to aid in this direction would help.
It is important to mention that social media tools do not replace what is currently being done, but they ensure that the message gets out there even closer to the people, who are already on Facebook or Twitter. Create stellar content, follow a plan, learn every day and things will flow on their own.