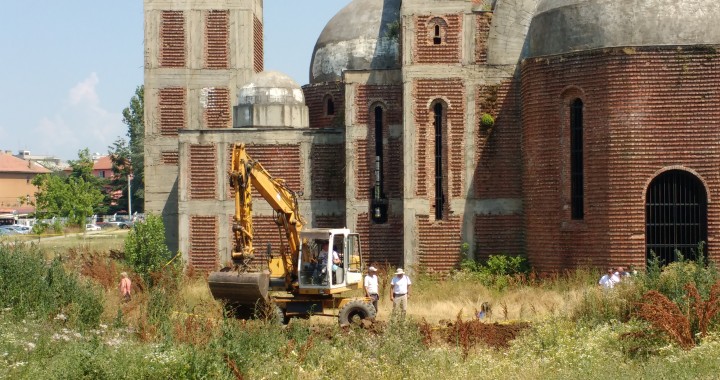 Excavations next to the church. Photo: Lura Limani.

The search for a mass grave in downtown Prishtina begins

Forensic experts began excavations on the University of Prishtina campus in search for a mass grave of Albanian victims of the 1999 war.

On Wednesday morning, the Department of Forensics began excavations next to the Serbian Orthodox Church located on the University of Prishtina campus. The excavation team is looking for a mass grave that is suspected to contain bodies of Albanians killed during the war in 1999.

A month ago, head of the department Arsim Gerxhaliu revealed in an interview for local television station TV Dukagjini that his department had been tipped off by one of the area’s inhabitants that Serb forces had buried bodies in the lawn between the unfinished Orthodox church and the National Library.

“I received a call from a woman who said that she had seen from her building, and told me she would show me a place next to the church where she suspects that people were buried,” said Gerxhaliu at the time, adding that his department would look into it.

A month later, the area next to the unfinished church, which began construction in 1995 but was never completed, has been cordoned off as experts conduct investigations for the next couple of days.

About 1,650 people are listed as missing since the Kosovo-Serbia war in 1999. Many of them are suspected to have been buried in mass graves throughout Kosovo and Serbia.

The church near the location of the suspected mass grave has been the focus of much dispute and is today considered as an emblem of Milosevic’s oppressive rule in Kosovo.

Deputy Prime Minister Branimir Stojanovic, a representative of the parliamentary group Serbian List, Lista Srpska, expressed his support for the excavation as the team began their work.

He also asked for the revitalization of the church, which local institutions consider to have been illegally constructed on land owned by the University.

“After we verify the existence of this mass grave, I call on everyone to functionalize this church,” said Stojanovic.