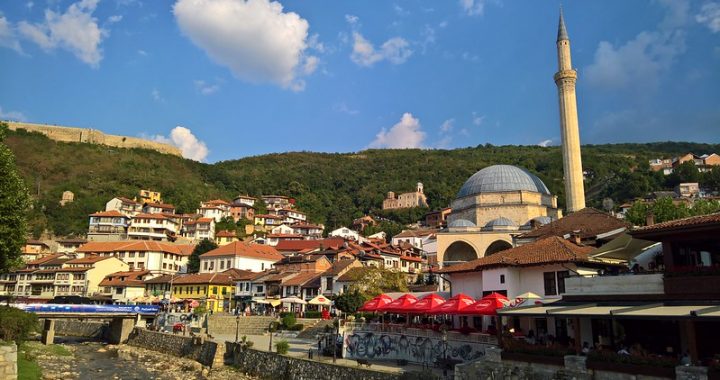 Bistrica river and the Mosque of Sinan Pasha in the foreground. The city of Prizren in the background. August 2017. Photo by: Norbert Bánhidi/Flickr

Peaceful co-existence according to the teachings of Islam

Since the beginning of time, humankind has been divided by their racial, linguistic and religious identities, which they have cultivated throughout their historical trajectory. This is an undeniable reality of the configuration of the entire human race on earth.

In the early sources of the holy books, including the Qur’an, mankind is seen as God’s most beloved creatures – those who maintain order on earth.

According to Islam, God is seen as the common Creator of all people, as well as the single source of prophets and holy books.

It is precisely for this reason that believers of Islam are called to believe in all of God’s prophets who are mentioned in their holy book, the Qur’an, as well as in other prophets mentioned in earlier holy books, including the Old and the New Testaments. According to Islamic teachings, denying any one of these prophets is considered a deviation from the general Qur’anic message.

Religion could serve as a broad, uniting platform through which people of different religions can come together in their respect for different ideas and beliefs, as well as for joint action in the service of human society.

The various religious beliefs associated with God Almighty should not prevent us from cultivating a peaceful life on earth.

The absolute judgment of a man’s righteousness of faith or lack of faith belongs to his Creator. Because, if God had willed it, all the people in the world would have belonged to a single religious community. The Qur’an stipulates that there was more than one messenger and more than one book revealed by God. The Qur’anic call to believe in all prophets as God’s chosen ones, distinguished to convey heavenly messages on earth, is explicitly mentioned in the Qur’an: “The Messenger (Muhammad) believed in what was revealed to him from his Lord, and so did the believers. Everyone believed in Allah, His angels, His revelations, His messengers. We make no distinction between any of His messengers, and they said: We answered the call and obeyed the command. We ask for your forgiveness, our Lord! Only in You is our future. (Al-Baqarah: 285). This Qur’anic quotation clearly shows that the human world has had prophetic missions from the beginning and that all the prophets were inspired by a single God but people divided themselves according to how they accepted and perceived His message.

The correct line of interpreting Islam always calls for the good and proper treatment of all who do not share the same belief in God. In this regard, his teachings require respect, tolerance, and decent human behavior as virtues that build a meaningful life and peace between people. Man cannot and must not be driven by force or violence to believe in a certain faith, but neither can he be hated nor fought against for the fact that he or she does not share the same path of belief in God as us. “There is no violence in religion.” (al-Baqar: 257)

The Qur’anic teachings recognize and respect the Adamic genesis, which is strongly accepted in all major monotheistic faiths. In monotheistic religious teachings, the Adamic Genesis recognizes Adem (Adam) and Hava (Eve) as the first origin of the human being on earth. This first genesis shows that, regardless of where man is, he is still a human, and that he is known only by this name; regardless of race, color, or religion:

“O humankind, indeed We created you from a male and a female and made you into nations and tribes, that you may know one another. Surely the most righteous of you in the sight of Allah is he who has the favor of Allah. God is All-Knowing, All-Aware.” (Al-Hujurat: 13).

From this, it is meant that the struggle of human “In the name of God” also means the struggle of God’s will for the creature called ‘human’. Human, wherever he breathes on the surface of the earth, has a common name. Even according to contemporary scientific studies, the composition of blood cells and their function in the human body is the same up to 99.9%.

As such, considering our common genesis was created by God, in whom we trust, then even the respect and love we have for each other, regardless of our religious beliefs, is greater because to love man means to love God as well, who created man pure and without prior religious education.

Good behavior and proper treatment of all people without distinction

Correct Islamic interpretations and advice require believers to avoid violence and cruelty towards people and to approach and converse with fellow man, regardless of when and with whom,  with wisdom, kindness and respect.

“You were kind to them, for God had mercy on you, and if you were rude and cold-hearted, they would be dispersing from you, so forgive them and apologize to them, consult with them in all matters, and when you decide, then rely on God, because God loves those who rely on Him!” (Al-Imran: 159).

In one of his sayings, the Prophet Muhammad himself underlined some concepts of compassion and gentleness, which are still key in the practice of maintaining respect, love and harmony between people to this day.

“The mercy of God belongs to those who have mercy on others, and to those who are merciful to God’s creatures on earth in general. Whoever is merciful on earth, he will be shown mercy by the One who is above!”.

Furthermore, in the correct form of Islamic religious advice and messaging, fighting against civilians and the innocent, killing on the grounds of infidelity, usurping property, attacking children on the lap of their mothers, killing pupils and students in schools, and killing elders is strictly forbidden and seen and tried as a criminal act.

An attack on people’s lives, according to the Qur’an, is considered equal to an attack on the right of all people to live and such an attack is considered among the most serious sins.“(…) whoever kills a man (unjustly), without him having killed another, and without having caused any destruction on earth in the first place, then (his crime) is considered equal to him having killed all the people of the world. And whoever resurrects him, it is as if he had resurrected all the people of the world.” (El-Maide: 32).

Therefore, from all that has been said above, it can be declared that God belongs to all, and man can never know or attain absolute knowledge about Him. Hence, it is important to always cultivate our faith in God with love and respect for each other, to work, cooperate, and show solidarity for a common and shared interest, without judging the other in advance based on the form of faith he has ingrained in his heart and soul, which, like two internal organs of every human being, are designed by the Creator to remain invisible to our eyes.