The disappearance of handcraft and the old tools for the processing of plis, the traditional Albanian hat, complicates the campaign to get plis on UNESCO’s List of Intangible Cultural Heritage.

The corner store where the 85- year-old Nijazi Kasapi used to work and store his traditional work tools is now a modern building.

Kasapi learned how to craft plis, the traditional Albanian hat, at the age of 12. Now, his profession as a plis-maker has disappeared.

As demand for the traditional white caps has fallen, so has the interest in learning how to craft them. Instead of passing his tools down to a family member, as his father did with him, Kasapi handed over his plis-making tools to the Museum of Peja.

The 85-year-old said that he is very upset that his house had been torn down to build apartments and that he no longer has the opportunity to keep his old work tools in his house.

It is possible that the plisi and the old work tools will become an artifact preserved only  within the four walls of the museum. Future generations may not recognize the white cap as an inseparable part of Albanian culture. 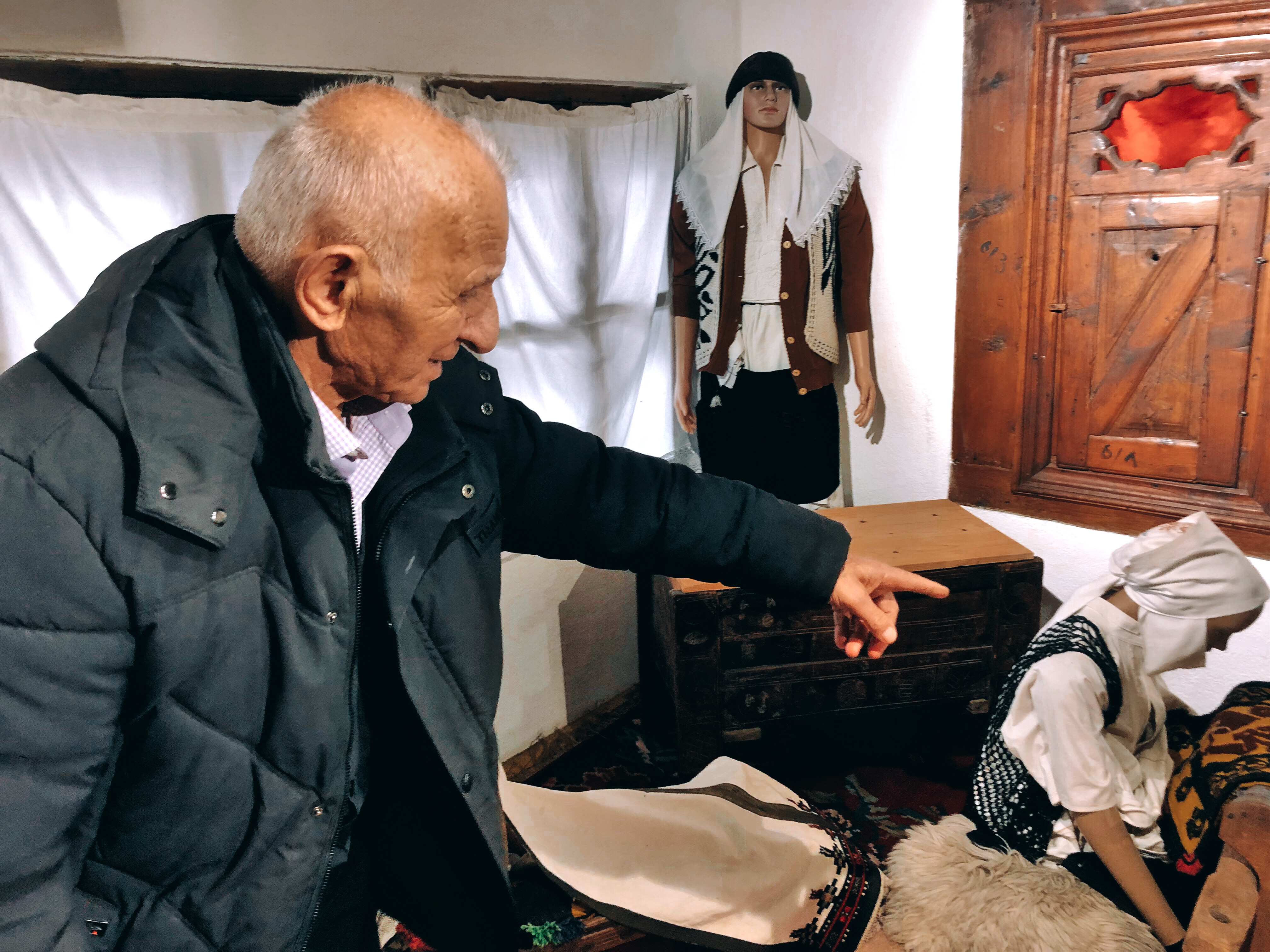 Older Albanians refused to remove plis from their heads, even when it made them targets of ethnic persecution.

Kasapi had put his own plis on a mannequin dressed in national clothes at the edge of the second floor of the museum.

“That plis belonged to me.  When I came [to the museum], I saw that this manekin had a brand new white plis. I removed that one and put mine, to fit him better,” confessed Nijazi Kasapi in an interview for Prishtina Insight.

First to  his workshop in the center of Peja in the 80s, then to his house on the outskirts of the city in the 90s, his tools made their final journey to the Museum of Peja.

The old craftsman of Peja, Kasapi, said he decided to hand over his tools to the museum because he was afraid that they would be damaged by time and people.

Nowadays that the youth is mostly focused in professions that have nothing to do with crafts and heritage. Kasapi said that the plis is created very rarely, just so as not to be forgotten.

“I was 12 years old when I started creating plis. Because my father split his  inheritance with his brother, he needed me to help him. This craft is difficult to work with. Two people are needed for the work, because the process goes like a chain,” he explained.

Kasapi enjoyed creating the traditional plis, especially when people were interested in  buying them. Now, his will has fallen due to the decline of interest.

“No, I didn’t think about continuing the tradition. These old crafts are all left behind, because nobody is making the white plis anymore. It is only being used  for a wedding, a ceremony or a special event. Other than that, nobody uses them anymore,” Kasapi confessed.

He fears that the tradition of crafting plis will disappear, but he still has hope that  modern technology can keep the plis alive.

“The work of pleating is being abandoned over time because now there is only one craftsman who maintains this craft in Peja, Afrimi. He is dealing with them and he is the only one. It’s a shame if [the people] forgot that this has been a symbol of the Albanian people for thousands of years,” added the 85-year-old.

From Japan, lobbying for Kosovo to UNESCO

Living on another continent has not prevented Mithat (Micky) Haxhiislami from contributing and promoting Albanian culture and heritage.

Even though he studied dentistry and has a business in Japan, Haxhiislami, originally from Peja, has constantly made virtual campaigns for the inclusion of plis in UNESCO.

Every day on Facebook, I get three or four notifications from Haxhiislami that publishes old photos and calls for the recognition of Albanian culture.

“That’s why for me this thing is not difficult at all and I make it with pleasure and pride,” said Haxhiislami in an interview for Prishtina Insight.

For over twelve years, he has spent 30-60 minutes every day sharing this digital promotion.

Having lived in Japan, a country that values cultural heritage, for 20 years, Micky says he is further inspired to do the same for his nation.

The routine of forgetting one’s history was promoted by the communist regimes in Albania and Yugoslavia. According to Haxhiislami, this practice needs to come to an end.

Haxhiislami began lobbying through social networks for the plis last year. While for xhubleta, a traditional Albanian garment that was inscribed to UNESCO a few months ago, he lobbied every day for five years.

He believes that it will take time for plis to be added to the UNESCO List of Intangible Heritage in Need of Urgent Safeguarding, but he hopes not as much as the time it took for xhubleta.

Micky says that institutions of Kosovo and Albania have not contributed enough to preserve the plis as cultural heritage.

“It is a pity that Kosovo has not yet managed to become a member of UNESCO, because this is certainly making the situation more difficult. But I hope that the Albanian government will act in the same way as for xhubleta, Kcimin e bjeshkës me tupan të Tropojës, Ritualin e lashtë te shtegtimit të bagëtive, Kcimin e Logut, etc.,” he said.

The advancement of working tools for creating plis not only diminishes the authenticity but also makes its application to UNESCO impossible, because the organization recognizes only those crafts that are worked with using traditional methods, according to Haxhiislami. 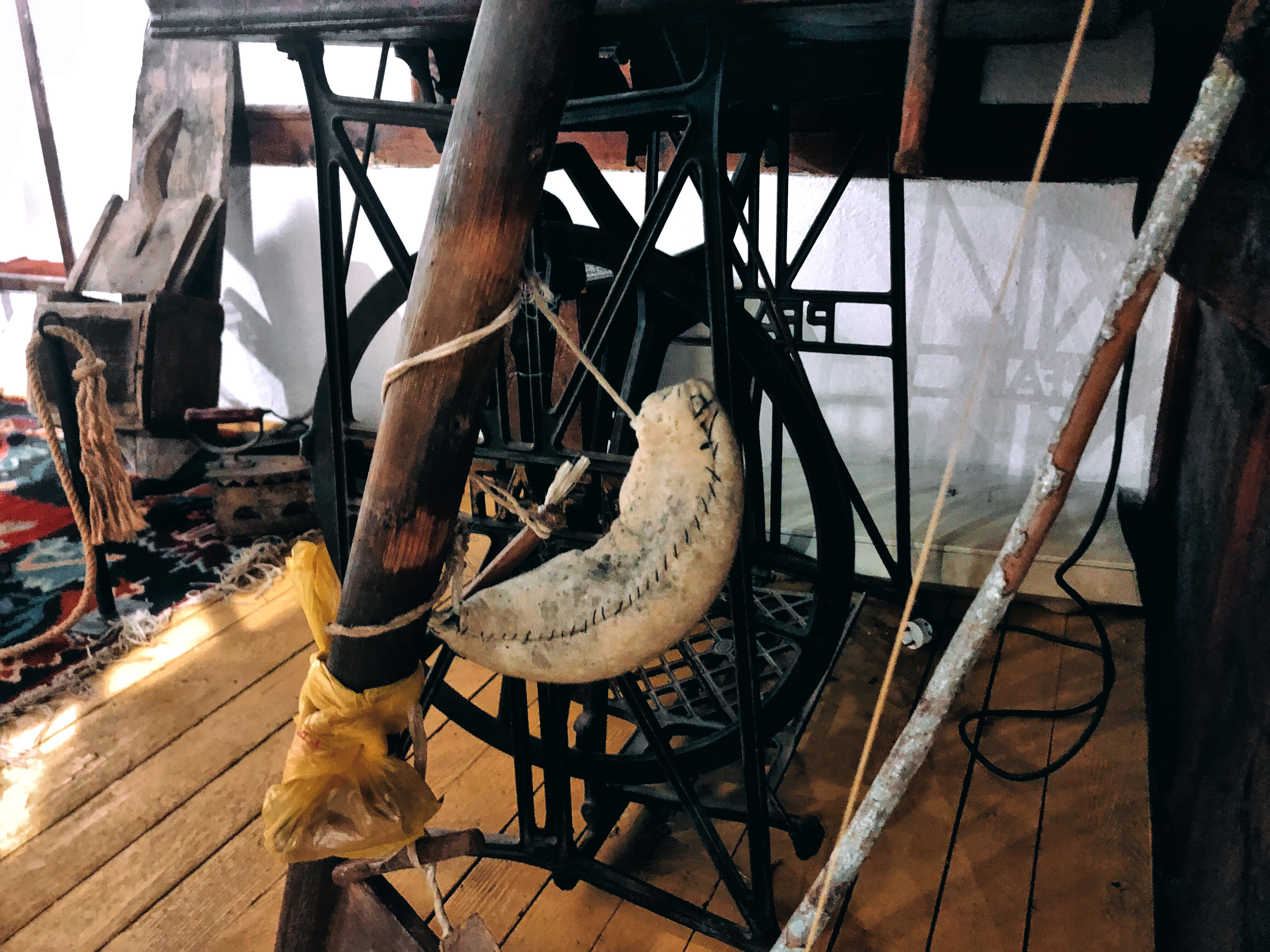 Crafting the plis is quite difficult and takes 14 stages. Each phase must be meticulously documented in order to prepare a proper file for the application to UNESCO.

“It would be a pity if the traditional method of pleating were to disappear completely. This would never be forgiven. Let’s not forget that the plis in our clothing is extremely important, both as a function and as a national symbol,” Haxhiislami said.

His main wish is for the institutions of Kosovo to spend more on training plis-makers so that they can serve the new generations and share Albanian culture with  foreigners who come to visit Kosovo.

The admission of plis to UNESCO as a protected handicraft would bring financial benefits from this organization, which would be good motivation for young people to continue this thousand-year-old tradition, Haxhiislami explains.

Although there are only a few families left who have preserved and inherited the craft of making plis, but as long as they still exist plis has a chance of being accepted by UNESCO as a protected cultural handicraft, he says. But the institutional hand is out of his hands.

“Of course, the will of the two governments is not enough at the moment, but I believe that this will change if we all put more pressure on them to fix this urgently,” he said.

According to him, without financial assistance it is difficult to do anything. Here the various Albanian associations around the world can also play an effective role.

In order for the plis to be ‘back in fashion’, Haxhiislami proposes the organization of  a”National Day of Plis.” To promote the wearing of the plis, the National Guard of Honor, representatives from businesses at world fairs, and others would wear the plis.

Nowadays, the plis is only worn on national holidays, football matches, family gatherings, or any gathering with a more patriotic character.

Ethnologist Valon Shkodra says that in the past a considerable number of people of different ages wore the plis.

“For national holidays, plisi is used even more by all ages, who come out to celebrate,” says Shkodra. 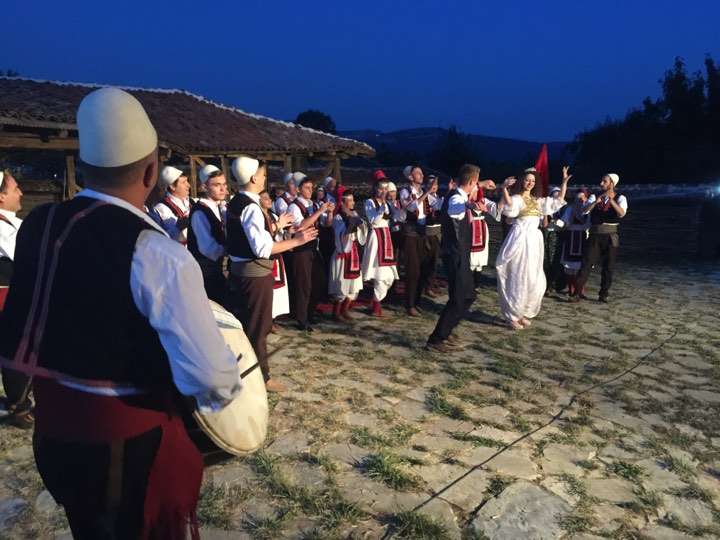 The plis is only worn on national holidays, football matches, family gatherings. Photo:BIRN

According to the ethnologist, the fact that we find it in folk songs, proverbs, beliefs and superstitions makes the plis a symbol of national identity.

Almost every Albanian house that has or had an elderly person over the age of 70 who wore a white or even black plis. The plis occupies a special place in the main part of the room as a sign of respect for its age and the person who kept it.

The name plis is believed to originate from the ancient Greek term ‘pilos,’ which describes an empty hat. In the Dictionary of Albanian Language, the word plis is described as a piece of textile which is not woven but made with compressed wool and washed a few times with soap.

Shkodra estimates that now the sale of plis is not like it used to be because there is no special store just for them.

“Plisi can be found in all souvenir shops, markets and some museums, but if we compare with the past, this craft is facing great difficulties. We also have craftsmen who know this work well, but because of their economic existence they have changed their profession,” he considers.

In Shkodra’s book, Ethnological Museum of Prishtina and Its Function, he wrote that the greatness of the plis is also shown through oral narrations from Kastriot Morina, a craftsman for the plis in Mitrovica.

by Hamdi Firat Buyuk
Next: News