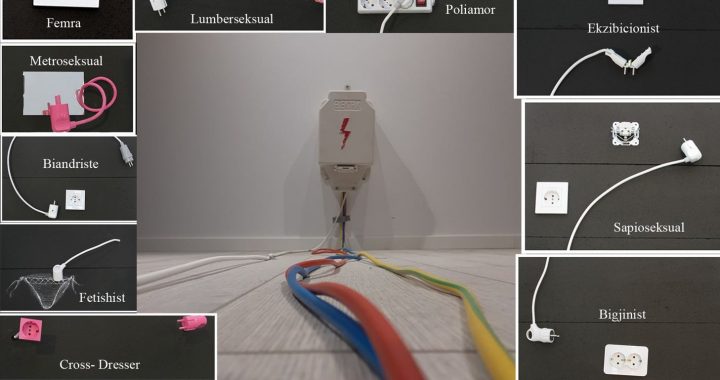 Some 32 artistic items, such as electrical outlets and plugs, serve as symbols of sexual power and diversity at a show in the City Gallery in Gjilan.

Sexual diversity has taken on another artistic form at the Gjilan City Gallery through “Short Circuit”, an exhibition revealing sexual energy and power beyond the ways that we normally see it – through the electrical appliances that are part of our daily lives.

Placed on silk blocks on the floor of the Gjilan City Gallery, this energy is portrayed in contemporary art through plugs, sockets, cables and colours.

Decomposed in its simplest form through the devices we come in contact with every day, the exhibition explores diverse responses to sexual power, and to those behaviours that respond to the universality of human sexuality.

“Short Circuit” indicates sexual diversity, from the most common forms of sex to those that are stranger and end in spoj, or short circuit, somewhere.

The author of the exhibition, Avni Rudaku, has explored sexual diversity in three time lines, reflecting it in different times and places.

The exhibition begins with an installation of “paedophilia” and ends with “sexual dysfunction”, beginning with concussions and paraphilic disorders, and ending with absence, delay and pain during sexual intercourse.

Rudaku told BIRN that the installations represent normal sexual behaviours and those that are more controversial, depending on the culture, country, period, state and type of political and social system.

According to him, there is no need to necessarily end in a short circuit, and that there are different ways to transmit electric, or sexual, energy to each of us.

“Each of us has a fantasy of how we receive and give the energy, to achieve sexual liberation and to avoid short circuits,” Rudaku said.

Rudaku says that the works are divided into several categories, alluding to combined and universally accepted connections everywhere, those accepted somewhere and opposed elsewhere and paraphilic disorders that are unacceptable almost everywhere.

“Short Circuit”,  he adds, concretizes the drama of human sexuality with the same medium in 32 installations.

“Forelectricity, as for sexual energy, there is a multitude of demands, prohibitions, preferences and fantasies, up to disorders coded by the scientific authorities,” Rudaku observes.

“There is also the short link in human sexuality, outside of the particular social and cultural path, to be supplied, aroused, expressed and liberated,” he added.

The exhibition is named “Short Circuit” because “some combinations cause overcurrent (in Albanian: marrin spoj) somewhere, and some do not – and even in the same place, may change, over time”

The exhibition will be open until April 4, 2022, on five working days of the week, from 9am to 3pm at the Gallery of the City of Gjilan.