Although officially not available in Kosovo just yet, the popular game has taken a rapidly growing fan base by storm.

If you have noticed a sudden increase in people pointing their mobile phone cameras towards you on the streets, chances are they are not trying to creepily photograph you, but trying to capture virtual critters for amusement.

Only one week after its initial release on July 6, “Pokemon Go”, an augmented reality mobile game developed by Niantic, Inc and published by the Pokemon Company, has taken the world by storm. Even though the game is thus far officially available only in the US, New Zealand, Australia, Germany and the UK, it has gained tremendous popularity all over the world. By July 7, the game was already installed on more US Android phones than the dating app Tinder, and it is on track to surpass Twitter in daily active users on Android.

Although social networking websites have been flooded with screenshots of these beastly creatures in parks, offices, and even places like the United States Holocaust Memorial Museum, many are still confused over its overwhelming prevalence and success.

So, what exactly is “Pokemon Go”? For most millennials, this is probably a painfully redundant question, but to better understand the origins of the game, let us make a quick detour to the conception of the franchise.

The first Pokemon games were released 20 years ago for the Nintendo Game Boy console. Satoshi Tajiri, the creator of the Pokemon Company, drew mostly from his childhood hobby of catching insects and tadpoles in the suburbs of Tokyo, Japan for conceptualizing the game. This media franchise has become is one of the highest-grossing of all time, selling over 280 million units of Pokemon-related software and earning an estimated 57.65 billion dollars in overall revenue as of May 2016.

In simple terms, the main purpose of the game is to trap a virtual species of animals called Pokemon (Pocket Monsters) into Poke Balls and to have them fight with other creatures owned by human characters called Trainers for fun and glory. Although, in our world, this might easily translate to enslaving innocent animals and smashing them against one another for sport, it is an acceptable and fairly common practice in the Pokemon world.

“Pokemon Go” shares many features with conventional Pokemon games, the key difference is that it uses real-time location detection through GPS and Google Maps to create an interactive universe all contained in your mobile phone. In order to actually catch the Pokemon, you have to go outside and track them down in places which are revealed to you on the virtual map. Approaching the creatures will trigger the camera on your mobile phone, which then displays a fairly realistic moving image of a Pokemon wherever you point the lens.

Apart from capturing the critters, there are numerous locations which correspond with real-world landmarks (called Gyms)  where you can either take over or collect various in-game items (called Pokestops), including Poke Balls, so you can catch more Pokemon. 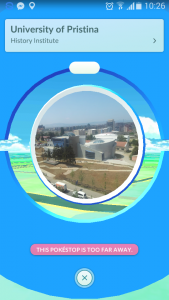 A Pokestop in Prishtina. 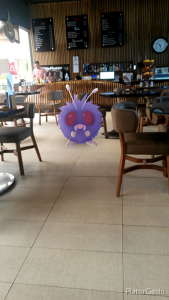 A Venonat hanging out in a bar in Prishtina.

Even though the game has yet to be fully rolled out in Europe and other parts of the world, this has not stopped droves of people from hastily installing it on their phones through changing country app stores and bootlegging.

Kosovo is also partaking in the collective bouts of exercise made possible by “Pokemon Go,” with many people already embracing the game and its mechanics.

Pleurat Pula, a Prishtina local who moderates a handful of interest-based social networking groups, established the first “Pokemon Go” community in the city along with his friends and colleagues. He says that the Anime Community of Kosovo – a group of almost 1500 Japanese animated film enthusiasts which he also founded – is where most of the members of the new community were acquainted to the game.

“We started off with five players in the first few days, now we have gathered almost 250,” said Pula on Thursday. By Friday this number had jumped to 327. “We often arrange meetings in different parts of the city where we also stumble upon other players who pass by, we socialize, laugh and generally have a great time discussing matters related to the game. It is a true revolution for us who have grown up playing the console games.”

In addition to preserving the nostalgia of the older versions, Pula says that the gameplay style allows for a much more inclusive experience overall.

“I usually play the game in the morning, and I have had many great encounters with people on the streets,” Pula says. “One time I had just taken over a Gym at the Zahir Pajaziti statue and I was confused to see another person try to snatch it from me. We chatted and joked about it for a while, and I decided to let him have it [the Gym] as a gesture of respect. It was seven in the morning,” said Pleurat, laughing.

The President of Israel Reuven Rivlin a snapshot of his office his Facebook profile, saying “Somebody call security.”

Dina, 28, says that the game is something she could only have dreamed of as a kid.

“I find the concept of being able to virtually catch Pokemon around town amazing, but I haven’t found the time to play,” she says.

On the other hand, gamers from smaller cities and rural areas have a generally diminished experience due to the small number of players and lack of sufficient checkpoints.

Imrit Kasapolli from the city of Peja says that the absence of a community has not stopped him from enjoying the game.

“I have been a gamer and a Pokemon fan for as far as I can remember, and although there are not many people that currently play in Peja, I find it very enjoyable to hunt for the Pokemon myself and ‘earn it’ as opposed to the slow-paced gaming style that the console versions offer,” Kasapolli says. “My town will probably require a bit more time to form a fully-fledged community, we definitely need more players.”

Despite this, he has run across a few players during his virtual hunts.

“I once met a German guy and a Peja local and they were amazed by how strong my collection was,” Kasapolli recounted.  “Some people are indeed confused by it [the game], I was about to capture a Pokemon close to a mosque one day but I was shooed away by a few elderly men who told me I could not take pictures of the mosque’s entrance. I never got to catch it.”

The good news is the developers have set up a support website through which you can request for Pokestops and Gyms to be either created in places where they are nowhere to be found, or moved if they are located in inappropriate spots such as private residences.

In the US, players have accidentally discovered corpses in public spaces and criminals have lured players into armed robberies, while the Westboro Baptist Church has accused a Fairy-type Pokemon nicknamed LOVEISLOVE of being a sodomite. Thankfully there have been no Poke-mishaps in Kosovo as of yet.

As the frenzy grows around the world one thing is certain: no one will be worrying about ‘those kids getting exercise’ anymore. Or even adults for that matter.


This is a map of the bulk of the current Pokestops and Gyms in Prishtina: 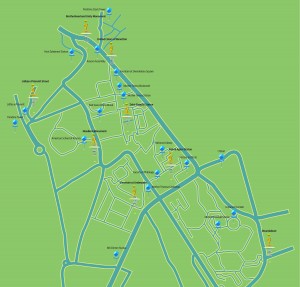