Poverty within Kosovo’s Minority Communities Forces Children out of School

The education of children from the first to the twelfth grade is mandatory for all citizens of Kosovo, but over the years students from the Roma, Ashkali and Egyptian communities have been part of the discussions about dropping out of school.

Two children from these communities narrate how they  have been forced to drop out of high school to help their families due to the difficult economic situation.

Omer *, 18,  from the Roma community in Prizren was forced to drop out of school three years ago after his parents fell ill and were unable to work.

Under pressure to support his family Omer decided not to attend high school, and at the age of 15 he started collecting empty soft drink cans and selling them to recycling depots to provide medicines for his father and mother.

Speaking to BIRN, Omer said: “I’m not against going to school, but if I were to continue my education until college I would need even more money to do so, and so I need to work for as long as my parents need me to send food and pills home.” 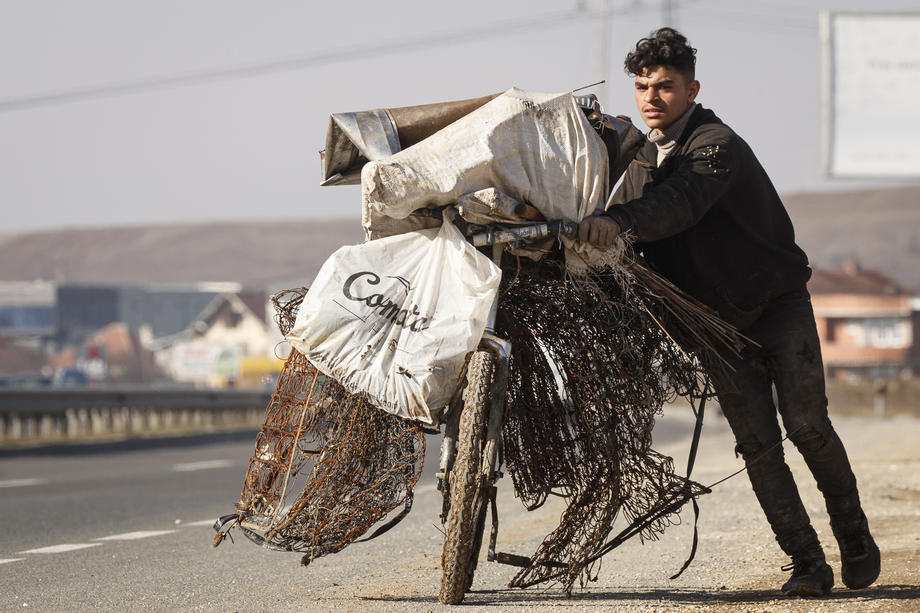 A Roma boy pushes his bicycle filled with iron scrap near the town of Obilic, Kosovo, 05 February 2021. EPA-EFE/VALDRIN XHEMAJ

Omer’s mother has two other children attending primary school. She told BIRN she felt guilty that she could not help Omer with his education. Now, she said, she waits for him to come home with the medicines and said his help was improving her life.

“My husband and I did not know that Omer had left school initially, because we were both at home unable to get up and we could not attend school for parents’ evenings and other events,” said his mother.

Numbers of school dropouts in Kosovo

Of the 992 children in total who dropped out of school, 67 were from the Roma, Ashkali and Egyptian communities.

While less than 1 percent of pupils in Kosovo left school, the drop out rate appeared to be higher among Roma, Ashkali and Egyptian children, suggesting they were disproportionately affected .

Iliriana Pylla, a spokesperson for the Ministry of Education told BIRN that school dropout rates had decreased in recent years.

“Currently we have a 0.05 percent dropout rate in compulsory education. Compared to previous years, we have a small decrease from 0.07 percent last year and 0.09 percent two years ago,” Pylla said. “ In any case, the data are worrying.”

The report added that school attendance decreased as children got older, while more children from Roma, Ashkali and Egyptian communities were lost in the transition to secondary education.

Lejla * who is 19 years old and from the Ashkali community in the Dubrava neighborhood of Ferizaj has been unable to complete her secondary education due to her family’s economic circumstances brought on by the death of her father.

The primary school she attended for nine years is close to the house where she lives and the proximity of her school to home meant her family did not have to pay travel expenses.

In Kosovo all education up to and including university is free, but once at secondary school families are expected to pay for books and travel expenses. As all secondary schools in Kosovo are located in bigger towns, many families living in rural areas have to travel in for classes, a cost which families like Lejla’s cannot afford. 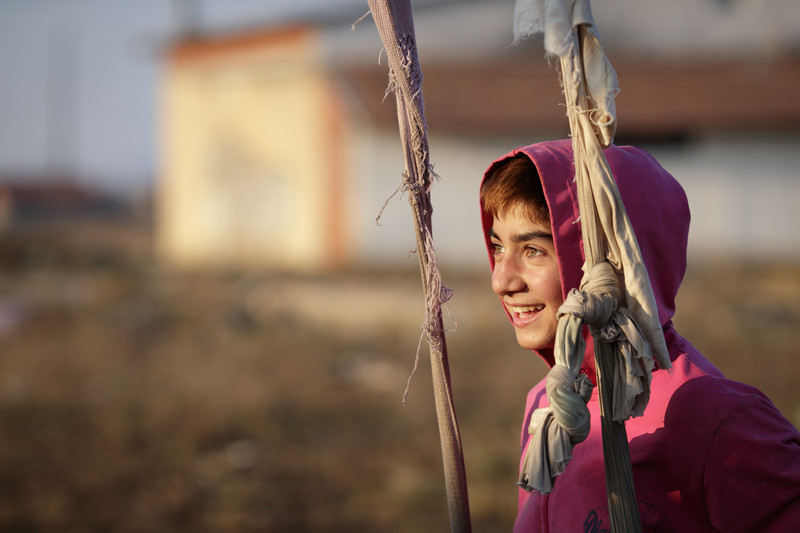 A Roma girl plays near by coal-fired power plants between houses in the town of Obilic, near the capital Pristina, Kosovo, 14 November 2018 (issued 15 November 2018). EPA-EFE/VALDRIN XHEMAJ

Lejla told BIRN that ensuring her mother was kept out of poverty was more important than going to school, and so she began selling plant seeds to support her family.

“Taking care of my family is my priority, and although I loved school it was enough to finish my primary education. Being able to read and write gave me what I needed to look after my mother,” Lejla said.

Economic conditions and prejudices – reasons for dropping out of school

As well as having to shoulder the economic burdens of their families, Lejla  and Omer have also been discriminated against by their classmates and in rare cases their teachers. They never reported these incidents for fear of being verbally or physically bullied.

“A classmate said to me, ‘do you see that you are different from us?’ I knew he was talking about the color of my skin. This made me feel so bad, and I decided I didn’t want to be in a place with people like that,” Lejla said.

Omer said that a friend of his had refused to sit on the same bench with him because of his skin color and his clothes.

“My family did not have enough money to buy me the same clothes as the others, which was why a boy would not sit with me, and the fact that I am a Roma, of course,” Omer said.

According to Article 3 of Kosovo’s Law on Pre-University Education it is stated that, “No person should be denied the right to education.”

Bekim Syla from the Roma and Ashkalia Documentation Center, an NGO, told BIRN that “ the main reasons for dropout are economic, then those of racism or bullying depending on the location where they live and attend school”.

Selamir Qerimi, a cultural expert on the Roma, Ashkali and Egyptian communities, said “external factors such as discrimination, social exclusion or bullying that these communities often face” can lead to a child dropping out of school.

“A window of opportunity” to continue schooling

Pakize Bujani, 21, is from the Ashkali community in Ferizaj and is studying for a Bachelor’s degree in English and German. Bujani was elected as an assembly member in the Municipality of Ferizaj in the last municipal election and campaigns to raise awareness about the challenges faced by children from Ashkali, Egyptian and Roma communities.

Bujani’s older sister was unable to attend school because her family was living under the poverty line, and insisted that her younger sister should follow her dreams and find her success.

“I worked part-time but was able to continue my education because my sister and my father worked. I am here because of them,” Bujani said.

Bujani studied medicine at high school and after completing her studies she worked for a year to save up the money to pay for university.

Bujani is now working as a tutor for Kosovo-based NGO,  the Voice of Roma, Ashkali and Egyptians.

Bujani also credits her success to the scholarship she received provided by Kosovo’s Ministry of Education. The scholarships are offered to minority communities in Kosovo.

Since 2014, the Ministry of Education, Science and Technology has distributed scholarships to 500 students annually from the Roma, Ashkali and Egyptian communities.

“The distribution of scholarships for students from the Roma, Ashkali and Egyptian communities has also had an effect on the regular attendance of students in upper secondary education,” Pylla said.

Qerimi, the cultural expert, said civil society mechanisms had been found to positively influence school attendance for children from these communities.

“We can say that satisfactory progress has been made, but, of course, work is still needed,” Qerimi said. “ The government has tried to reduce the dropout rates of these students through scholarship packages for pre-university level students. “This intervention has turned out to be good but not enough, as children are still dropping out of school.”

*The names of the girl and boy in the story have been modified to protect their identities.