“Prime Minister, do you know what salary we work for?”

While the salaries of state officials and MPs have increased dramatically in recent years, the cleaning and maintenance staff they share a workplace with are still overworked and underpaid.

Just a few steps away from the room in which Prime Minister Ramush Haradinaj was holding a meeting with his cabinet, Valbona Jashari, working alone, was cleaning one of the main halls at the Kosovo government’s premises. The two storey building, with its 40 offices and 12 toilets, are her daily responsibility from Monday to Friday.

“There are only seven employees, who clean the entire premises of the government,” said Valbona, stopping her work when a team from BIRN paid a visit to the government building.

She has worked as a cleaner on these premises for more than a year. Despite all the hard work she does, her salary is only 180 euros a month, around 16 times smaller than the prime minister’s salary of 2,950 euros.

Speaking to BIRN, Chairman of the Private Sector Trade Union, Jusuf Azemi, pointed to many violations committed by employers at cleaning companies. “We have frequent complaints about working conditions in general, lack of contracts, lack of equipment, and low salaries, which several times were lower than the minimum wage,” he said. 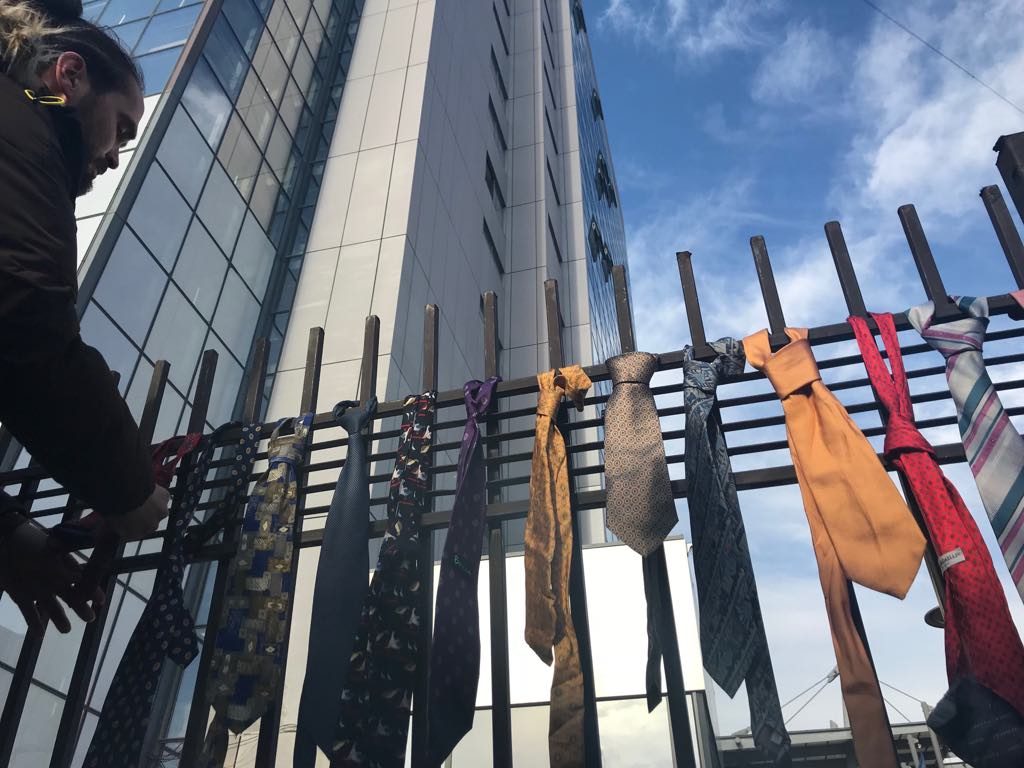 A protest in Prishtina against salary increase to 100 percent for Kosovo PM in December 2017. Photo: Dia Morina/BIRN.

In the time Valbona has spent working at the government building, her salary has increased by only ten euros. Prime Minister Haradinaj meanwhile took a decision in December 2017 that nearly doubled his own salary from 1,500 euros to 2,950 euros. Ministers, deputy ministers, political advisers, and even government drivers, have all benefited from this increase.

Valbona was not happy when she heard about the decision. “One does not feel good when one works with a salary of 180 euros in a country where salaries are very high. The prime minister never asks us about the salaries we work for. He does not experience the same thing as we do,” she told BIRN.

Cleaners that work at the Assembly of Kosovo face more or less the same situation as their counterparts at the government premises. They share the same workplace as Kosovo’s Members of Parliament, MPs, but the distinction in salaries between them is alarming.

With the new Law on Salaries, the base salary of MPs has increased from 1,488 euros to 2,031 euros per month. This increase makes them the best paid MPs in the region, ahead of Montenegrin MPs, whose base monthly salary is 1,200 euros, MPs in Albania who earn 1,080 euros, and those in Macedonia and Serbia who are paid 1,000 euros per month.

Kosovo now has the highest gap between the salaries of senior state officials and those working for minimum wage in the region.

The salary increase for MPs did not go unnoticed by *Artan, a technical employee in the Assembly, whose monthly salary is 300 euros gross. He is an employee of the Schafberger cleaning company that won the tender to carry out cleaning and maintenance at the premises of the Assembly of Kosovo. The salaries of employees working as cleaners in the Assembly are around 250 euros gross.

“MPs should have put much more focus on the conditions of private sector employees,” Artan told BIRN, blaming a lack of attention in this area for the large scale emigration the country has witnessed. In the last five years, the number of emigrants has exceeded 170,000 citizens, or about 10 percent of the entire population.

Artan explained that his salary does not cover his immediate family’s expenses and that he relies on the financial support of his extended family. He had a specific request from the institution where he works: “The problem that worries us most is that institutions are granting these contracts at very low prices for the company and this is having an effect on our salaries.”

“The problem lies in the tendering grants by the contracting authorities,” Ibrahimi said. “It happens very often that when institutions decide to contract cleaning companies, they place inconvenient conditions that affect employees. It can happen that the contracting authorities would tell the bidding company that in case you are granted with a tender, then one of the criteria should be more dignified salaries for workers.”

When asked if there were inspections conducted at these two institutions, Ibrahimi said that there is a lack of inspectors. There are a total of 42 labor inspectors throughout Kosovo, whereas, according to the Kosovo Tax Administration, there are 60,000 active businesses in Kosovo from 160,000 that figure registered with the Ministry of Trade and Industry, meaning there are roughly 1,500 companies for every labor inspector.

According to the companies, the blame falls on the institutions.

BIRN contacted the heads of the two companies that carry out cleaning work at the Assembly and the government premises to understand the reasons that led them to offer such low salaries.

Valmire Bujupi from Schafberger, who manages the company’s contract with the Kosovo Assembly, reveals that there are a total of 43 employees within the contract for cleaning and maintaining the premises. According to her, the lowest salary offered by this company is 250 euros gross, claiming that all employees are in possession of a contract.

“The main problem we are dealing with is the conditions set out in the tender by the institutions,” Bujupi told BIRN. “If the conditions would be more convenient to the company, this would certainly be reflected in employees’ salaries.”

Bexhet Haxholli, director of the Mobile Sanitary Services (MSS) cleaning company, responsible for cleaning at the government premises, confirms that the lowest salary for cleaners working there is 170 euros.

“The salaries of the cleaners are around 250 euros gross, while the salary of the technical workers is 300 euros gross. In small spaces, the salary is 170 euros,” Haxholli told BIRN. “In terms of salaries, I will unavoidably have to act in the future.”

According to Haxholli, the main reason for the current salaries is the inconvenient tender conditions provided by the government. “The government contract is 2,800 euros per month for 12 employees,” he said.

The director was skeptical about a recent initiative that arose from one of the parliamentary parties in the Assembly advocating for the immediate increase of the minimum salary. Their proposal is that the minimum salary should be increased from 170 to 250 euros.

At 170 euros, Kosovo has the lowest minimum salary in the region. But according to data from the European Statistical Office (Eurostat), in terms of the minimum salary level, the discrepancy between other neighbouring countries and Kosovo is not that large.  Montenegro’s minimum salary stands at 193 euros, followed by North Macedonia with 203 euros and Bosnia and Herzegovina with 208 euros. In Albania, the minimum salary is set at 211 euros, while in Serbia it is 231 euros.

According to Haxholli, the increase in the minimum salary should be applied gradually, otherwise it may cause problems to companies. “All of our employees are contracted,” he said.

However, for Valbona, an employment contract with a 180 euro salary does not carry any great importance. Although she shares a workplace with the prime minister, she says Haradinaj was never ready to hear her concerns. This is why she has persistently asked the BIRN team, that through this article, she pose a question to the prime minister, a question that has been on her mind for a long time: “Prime Minister, do you know what salary we work for?”

*Artan is a fictitious name to preserve the identity of the maintenance employee at the Assembly of Kosovo.