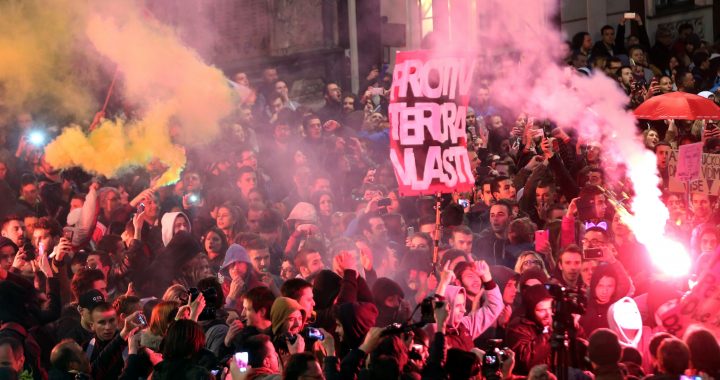 Protest banner reads 'Against the Terror of Authorities.' Thousands of protesters demonstrated against the election of Prime Minister Aleksandar Vucic as president. Photo: EPA/KOCA SULEJMANOVIC

Protests in Serbia awaken the opposition

As the protests against Vucic’s ascension to the presidency enter their third week, regardless of whether they grow or wither, they have already sent shockwaves through the country.

On Sunday, April 2, presidential elections were held in Serbia. They were widely regarded as the referendum on the government of Prime Minister Aleksandar Vucic, who surprisingly decided to run for President in order to prevent the opposition from winning the Presidency and thus jeopardizing his government. By becoming President, Vucic would control both branches of the executive and the parliament, being almost untouchable until the next parliamentary elections, due to be organized in 2020. The election campaign was short, but with plenty of drama and scandals.

In a country where election results are usually calculated and debated for days and nights after the voting day, the night of April 2 brought very little drama. Aleksandar Vucic comfortably won in the first round of the elections with a then-estimated 55 per cent of the vote. All major organizations monitoring the elections proclaimed his victory, most of the other candidates conceded defeat, and everything was ready for large fireworks, which lit up the Belgrade sky during the speech of the now president-elect. When the second placed candidate, former ombudsman Sasa Jankovic, finally addressed the public later during the night, almost all TV stations had already continued with their regular programme. It was quite an anticlimactic ending to an electoral campaign full of tensions.

With an already tight control of the parliament and the government through his Serbian Progressive Party, SNS, the victory of Aleksandar Vucic in the presidential elections signalled further strengthening and stabilization of his regime. In terms of power and competences, the night of April 2 saw him emerge the strongest, while the opposition appeared to be completely powerless.

The protests come as a surprise

When protests were scheduled through a Facebook event for Monday, April 3, they seemed nothing more than a desperate attempt to cry out against what was seen as a slow, but now certain slide towards authoritarianism. Indeed, not many people showed up, and those who did were mostly students – unorganized and politically and ideologically quite diverse. But, then something happened that shocked everyone – the protesters, the public, the media, and probably even Aleksandar Vucic himself: the protests became massive. As the students were marching through city streets, “armed” with whistles and posters, the crowd kept growing as the news about the protests spread through social networks and people started joining.

The protests spread very quickly throughout the country and were organized every day in Belgrade, Novi Sad and Kragujevac, among others. Some of them were organized by official student organizations, such as the Student Association of Novi Sad University, but others, like in Belgrade, lacked any organizing or coordinating bodies. Several individuals and groups emerged as on-site coordinators of the protest, but most of the participants themselves knew or cared nothing about them. The protests brought together people with different political and ideological beliefs with the single purpose to step up against a regime which was seen by them as increasingly authoritarian.

This led to a widespread speculation about the ‘true’ organizers of the protests, where the representatives of the government and pro-government tabloids suspected the opposition parties and presidential candidates, Western foreign powers and even George Soros, for instigating the protests and attempting to create violence and chaos. On the first day, the protesters in Belgrade were even accused of tearing down the “Serbian Wall of Tears” – a group of banners depicting the Serb victims and missing persons during the Kosovo War in 1999, which is installed in front of the Serbian National Assembly. This led to an outcry against the protests. There were unproven rumors that right-wing groups close to the ruling party tore down the banners in order to label the protests as anti-Serbian.

The protests occurred in almost complete media darkness. Even the national broadcaster Radio Television of Serbia, in front of which the crowd passed by and whistled every single day, barely mentioned the protests in their news programme. The media close to the ruling party continued with their accusations and conspiracy theories about the involvement of George Soros and other sinister forces in an attempt to remove Vucic by force.

However, the protests did not come to a halt and continued to grow, slowly attracting more and more media attention and support. The pinnacle of the protests was on Saturday, April 8, when the regular protesters joined the protests organized by police and army unions. This protest, unlike previous ones in Belgrade, had official organizers, speakers, security and a sound system, and brought tens of thousands of people to the streets. The police claimed there were 10,000 protesters. The organizers themselves, however, said that there were between 80,000 and 100,000. Moreover, the support given by police and army unions, traditionally held in very high esteem in Serbia, gave the protests some much needed legitimacy. The protests were then held every day until Wednesday, April 12, when it was decided that there will be a break for the holidays, and that the protests will resume on Tuesday, April 18.

The outcome is uncertain, but significant

Comparison between the protests in Serbia and the recent protests in Romania and the ongoing protests in Hungary are easy to make. But, while the protests in Romania were triggered by a government decree decriminalizing certain forms of corruption, and protests in Hungary emerged after government attempted to close down Central European University and jeopardize the work of foreign-funded non-governmental organizations in the country, the protests in Serbia occurred with no apparent demands. The demands–such as resignations in the Republican Electoral Commission, RIK, the Regulatory Body for Electronic Media, REM, Radio Television of Serbia, RTS, and of the president of the National Assembly–were added later, but they are hardly the reason for the protests. They represent an expression of an accumulated anger, frustration and fear about the authoritarian tendencies of Aleksandar Vucic, which exploded only after his convincing victory in the presidential elections. Therefore, they can be seen as arising from desperation, not from specific problems and demands. What all these protests have in common, however, is the fact that they broke out in absence of other democratic forms of dissent, since the ruling parties won comfortable victories and side-lined almost all political opposition in all three countries.

That being said, the protests do have the potential to become a game-changer in Serbian politics. In a country where the opposition has been weakened, compromised and practically humiliated in the elections (coalition around the formerly ruling Democratic Party barely passed the five per cent threshold in the last two parliamentary elections in 2014 and 2016), encouragement and the creation of new forms of political organization are desperately needed. It is important to note that three out of the first four candidates in the recent presidential elections were not representing political parties, but ran independently or with their quiet support. The protests, therefore, can serve as a catalyst for the re-emergence of the opposition through awakening and encouragement of the government-opposing Serbian public. This ‘awakening’ began last year with the protests against the infamous demolitions in the Savamala district, and the ongoing protest movement can be seen as their direct consequence.

The protests are due to continue on Tuesday, and independent media report about their possible “radicalization.” Also, the aforementioned protests against the unresolved case of Savamala demolitions are scheduled for April 25. Whether the protests will wither away or increase and start resembling the ones in Romania remains to be seen. But, whatever their outcome might be, they have already sent shockwaves throughout the country and encouraged all those opposing the current government. Not a small feat for a “group of drunk kids,” as some tabloids labelled the protestors on the very first day.

Nikola Burazer is the programme director at the Centre for Contemporary Politics and the executive editor at European Western Balkans.